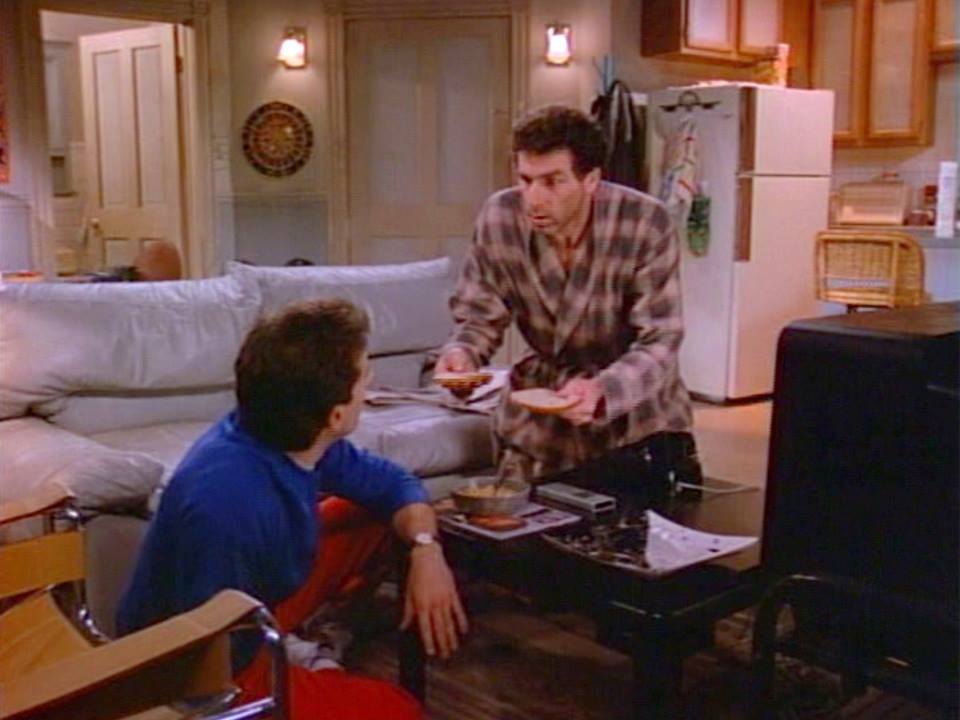 You got any meat?

Jerry is excited that a woman he met on the road is coming to visit him in New York. However, he has a tough time discerning whether her intentions are romantic or platonic.

Jerry: If you've got a t-shirt with blood stains all over it maybe laundry isn't your biggest problem right now.

Jerry: Let's face it, a date is a job interview that lasts all night. The difference between a date and job interview is not many interviews is there a chance you'll end up naked at the end.

George: Listen, your stuff has to be done by know, why don't you just see if it's dried?
Jerry: No, no, no, don't interrupt the cycle. The machine is working, it, it knows what it's doing, just let it finish.
George: You're gonna over dry it.
Jerry: You, you can't over dry.
George: Why not?
Jerry: Same as you can't over wet. You see, once something is wet, it's wet. Same thing with dead: like once you die you're dead, right? Let's say you drop dead and I shoot you: you're not gonna die again, you're already dead. You can't over die, you can't over dry.

Jerry: I swear, I have absolutely no idea what women are thinking. I don't get it, okay? I... I... I admit, I, I'm not getting the signals. I am not getting it! Women, they're so subtle, their little... everything they do is subtle. Men are not subtle, we are obvious. Women know what men want, men know what men want, what do we want? We want women, that's it! It's the only thing we know for sure, it really is. We want women. How do we get them? Oh, we don't know 'bout that, we don't know. The next step after that we have no idea. This is why you see men honking car-horns, yelling from construction sites. These are the best ideas we've had so far. The car-horn honk, is that a beauty? Have you seen men doing this? What is this? The man is in the car, the woman walks by the front of the car, he honks. E-eeehh, eehhh, eehhh! This man is out of ideas. How does it...? E-e-e-eeeehhhh! "I don't think she likes me." The amazing thing is, that we still get women, don't we? Men, I mean, men are with women. You see men with women. How are men getting women, many people wonder. Let me tell you a little bit about our organization. Wherever women are, we have a man working on the situation right now. Now, he may not be our best man, okay, we have a lot of areas to cover, but someone from our staff is on the scene. That's why, I think, men get frustrated, when we see women reading articles, like "Where to meet men?" We're here, we are everywhere. We're honking our horns to serve you better.

George: What, it was purple, I liked it. I don't actually recall considering the button!
Jerry: Oh you don't recall?
George: Uh no, not at this time.
Jerry: Well senator I'd just like to know what you knew and when you knew it.

Clair: Trust me George, no one has any interest in seeing you on caffeine.

Originally, Kramer was called "Kessler", mainly because the real Kramer (Kenny Kramer) did not want his name to be in the show. After the pilot, Jerry said to Larry that the name had to be Kramer, because it just sounded funnier.

The coffee shop in which Jerry and George frequent was not originally intended to be named "Monk's". It has been said that Monk's and Pete's are two totally different shops. That explains why we never see the waitress, Claire, again.

The character of Elaine was not cast as of this episode. After the pilot NBC said to Jerry and Larry that they could make four more episodes, but only if they bring in a female character into the cast. Not only did Julia Louis Dreyfus not appear in this pilot episode, but she was unaware that it existed. In fact, up until the time of the DVD release, she had never seen it.

Note when Jerry's door is open in this episode, there is no door or apartment for Kramer across the hall. It's just a wall with a Cuba picture.

It was reported that this episode was the least/lowest watched (rating wise) episode in all of NBC's television history.

Jerry Seinfeld and Michael Richards (Kramer/Kessler) also worked together in the 1984 TV movie "The Ratings Game".

Jerry never actually wanted a sitcom. The show was supposed to be an hour-and-a-half documentary to fill in for SNL about how a comedian gets his material and would be called "Stand-Up.

The episode title is "The Seinfeld Chronicles" on the Season 1&2 DVD.

Initially aired on a Wednesday as a one-time special.

There are two versions of this episode: the Original Pilot Version and the Revised Pilot version. Both are included on the Season 1/2 DVD.

The series does not have an opening credits sequence. Instead, the lead actor credits play out over a scene. Now commonplace in sitcoms and drama series, this was considered a novelty in 1990 and sparked a debate over the future of opening credits in TV series.

Jerry had a different apartment number in this episode.

Lee Garlington (Claire) was supposed to be part of the original cast, as the friendly waitress who gave advice to the boys about their daily lives (hence why she was in the opening credits, and not Pamela Brull, who played a bigger role in this episode) but was dropped because she was considered boring.

In this episode, George advises Jerry that with women you should never go by your instincts, but always do the opposite. He admits not doing so himself, but later follows this tactic to perfection in "The Opposite."

In this episode, the coffee shop Jerry and George go to is not Monk's. The exterior shot reads "Pete's".

Even in the pilot episode, there is a Superman reference. When Jerry sits down to watch TV, he is wearing a bright blue pair of sweatpants, and a bright red sweatshirt.

In the TV Guide entry for this episode, Kramer's character is credited as Hoffman.

In the first scene, pay attention to Jerry's shirt. Albeit consistently unbuttoned, the top part of his shirt subtly opens and closes between takes.