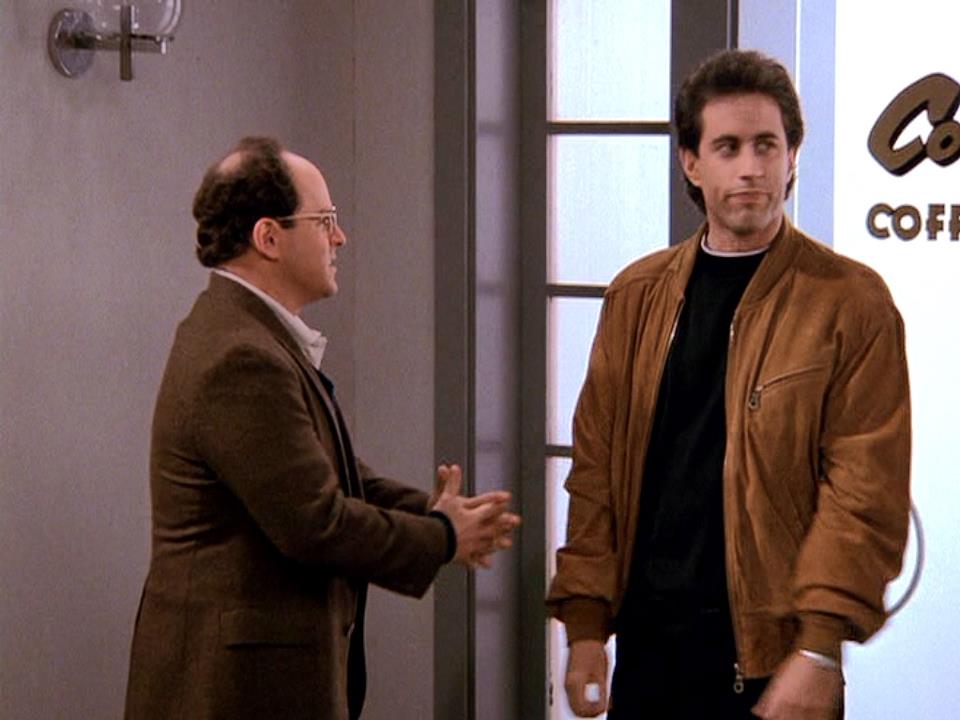 Let me be the architect. I can do it!

When Jerry goes to a birthday party with Elaine, he meets a woman he'd like to ask out, but doesn't get the chance to. When she leaves before he gets a chance to find out her name, he and George stakeout her office building.

Vanessa: Why don't you relax and take your jacket off?
Jerry: Oh, I can't. I have a tendency to get chilly.
Vanessa: How masculine.
Jerry: Plus I'm wearing short sleeves. I don't want to expose my tattoos.

Jerry: What's that one?
Elaine: "Cocoon II: The Return". I guess they didn't like it up there...
Jerry: Maybe they came back for Chinese food. Y'know Maureen Stapleton, if she gets a craving, she's probably screaming at those aliens, "I gotta have a Lo Mein!"

Jerry: (opening bit) I think to a man, a cheque is like a note from your mother that says "I don't have any money, but if you'll contact these people, I'm sure they'll stick up for me... If you just trust me this one time I don't have any money but I have these... I wrote on these... is this of any value at all?

Jerry: (to himself) What's going on here? Gotta be her boyfriend, she's too good to be alone. What's the difference, I can't maneuver anyway with Elaine next to me.

Vanessa: How big a tip do you think it'd take to get him to stop?
Jerry: I'm in for five.
Vanessa: I'll supply the hat.
Jerry: (to himself) Uh-oh. What do we have here?

Jerry: So, do you date immature men?
Vanessa: Almost exclusively.

George: I'm, uh, I'm an architect.
Vanessa: Really. What do you design?
George: Uh, railroads, uh...
Vanessa: I thought engineers do that.
George: They can...

Jerry: "Quone"?
Helen: ...30...31...
Jerry: "Quone"? No, I'm afraid that I'm going to have to challenge that.
(Jerry picks up the dictionary.)
Helen: ...32...
Kramer: No, you don't have to challenge that. That's a word. That's a definite word.
Jerry: I am challenging.
Kramer: Quone. To quone something.
Jerry: Uh-huh.
(Jerry looks up the word.)
Helen: I'm not playing with you anymore.
Morty: Quone's not a word.
Jerry: No good. Sorry. There it is. Get it off.
Helen: (to Kramer) Why did you make me put that down?
Kramer: Nah, we need a medical dictionary! If a patient gets difficult, you quone him.

Elaine: C'mon lets go, c'mon...
Jerry: Was I supposed to bring something?
Elaine: You could have.
Jerry: I met her one time...
Elaine: It is not necessary.

Jerry: Wait a second... That's her... on the right.
George: I forgot who I am! Who am I?!
Jerry: You're you. We're having lunch with Art Corvelay.
George: Vandelay!
Jerry: Corvelay!
George: Let me be the architect, I can do it!

Jerry: This is what I like, see? You come home and your parents are in your bed!

Elaine: A wedding!? Have you lost it, man?

Jerry: Y'know I think that even if you've had a relationship with someone, or let's say,especially if you've had a relationship with someone and you try to become friends afterwards, it's very difficult. Isn't this? It's hard. Because, you know each other so well, you know all of each others tricks. It's like two magicians, trying to entertain each other. The one goes, "Look, a rabbit". The other goes, "So? ... I believe this is your card".
"Look, why don't we just saw each other in half and call it a night? Okay?"

The idea of the episode came from a personal experience from Co- Creator/Ex. Producer/Writer Larry David. He once met a woman and didn't know anything about except where she worked, so he did a stakeout.

The song that Helen is humming as the Scrabble scene begins is "I Got Plenty o' Nuthin'" from George Gershwin's folk opera Porgy and Bess. It is appropriate that she is humming it since, as we learn, she indeed has "plenty o' nuthin'" as far as Scrabble tiles are concerned.

This is the first episode of Seinfeld to show a car scene.

This episode was nominated for the 1990 Emmy Award for Outstanding Editing for a Miniseries or a Special - Multi-Camera Production.

This is the only episode where Philip Bruns played Morty Seinfeld. After this episode, Barney Martin plays Morty Seinfeld for the rest of the series. Larry David wanted to reshoot Bruns' scenes with Martin for syndication (as he had done with the two actors that portraying Frank Costanza), but decided against the idea due to the episode with Bruns being too far back, which made the difference in the actor's ages noticeable.

Starting with this episode, the series is retitled "Seinfeld."

This episode also referenced, for the first time, the business of Importer/Exporter. This was used several times during the series.

In the opening scene, two women walk past Jerry and Elaine in the video store. If you look closely you could see the two women stepping off the set.