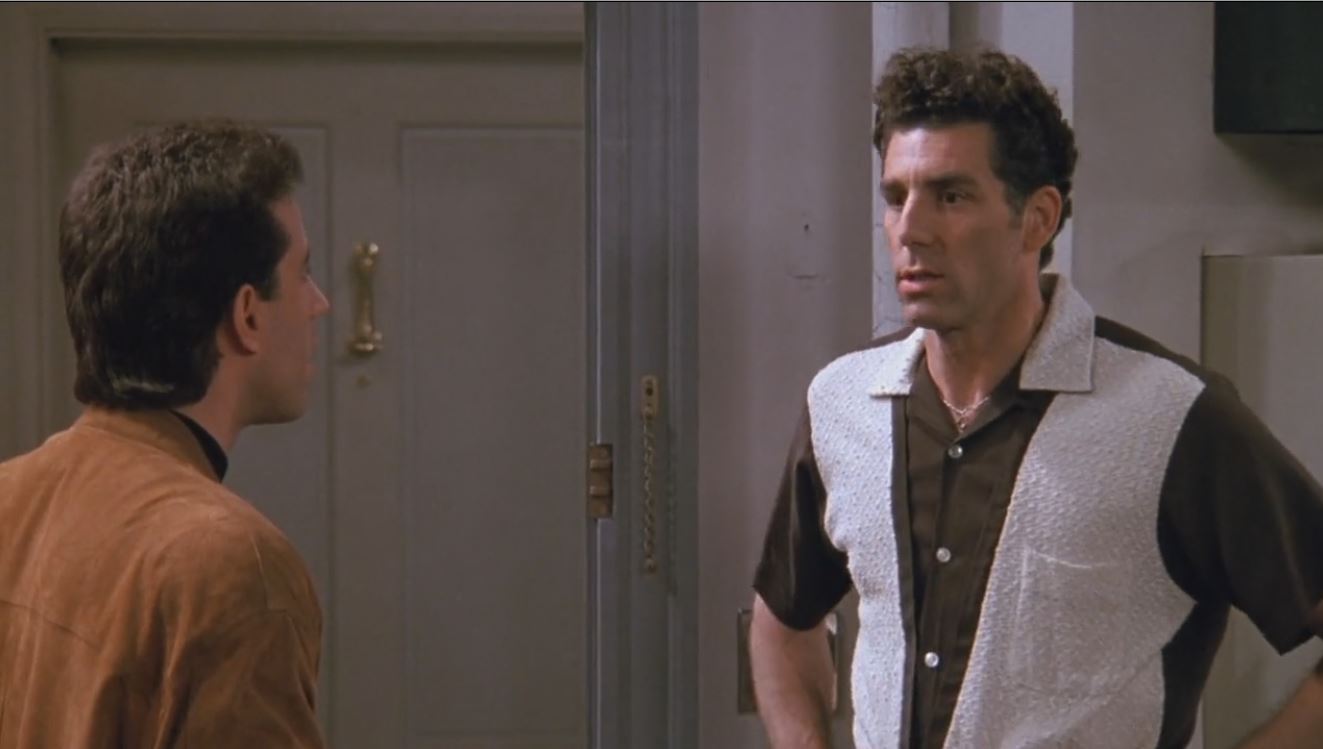 I got caught up watching a soap opera... The Bold and the Beautiful.

When Jerry's apartment gets robbed, he decides to move out. George shows him a great apartment, which he plans to take

Larry: I'm running in the park now, I've lost weight, we're barbecuing every night and the rent is unbelievable.
George: We're really glad for you.
Elaine: Couldn't be happier.
Jerry: It's wonderful.

Elaine: No, I'm staying here for the weekend. I'm getting a break from my roommate.
George: Oh, the actress-waitress.
Elaine: No, the waitress-actress.

(Response when he realizes his answering machine was stolen)
Jerry: I hate the thought of someone out there returning my calls.

Elaine: Excuse me, uh, I don't mean to cause any trouble here, but George, if you take it, can I take your place?

Elaine: (claps hands) That is the single greatest packing performance I have ever seen.
Jerry: I am the master packer.

Jerry: So I move into the center lane, now I get ahead of this women, who felt for some reason I guess, that she thought that I cut her off. So, she pulls up along side of me, gives me the finger. It seems like such an arbitrary, ridiculous thing to just pick a finger and you show it to the person. It's a finger, what does it mean? Someone shows me one of their fingers and I'm supposed to feel bad. Is that the way it's supposed to work? I mean, you could just give someone the toe, really, couldn't you? I would feel worse if I got the toe, than if I got the finger. 'Cause it's not easy to give someone the toe, you've gotta get the shoe off, the sock off and drive, get it up and... (Jerry pretends to drive with one foot in the air, giving the toe.) "Look at that toe, buddy." (He puts his foot down.) I mean, that's really insulting to get the toe, isn't it?

Kramer: I said, "I know about the stuff," you know, so he'd take me into his confidence.
Elaine: What did he say?
Kramer: "What stuff?"
Jerry: Oh, case closed.

Kramer: Well, I got caught up watching a soap opera... The Bold and the Beautiful.

Elaine: She just got some part in some dinner-theater production of a Chorus Line. So, now all day long she's walking around the apartment singing: (breathless singing) "God, I hope I get it, I hope I get it". (stops singing) She's gonna get it right in her...

Kramer: How can you not have insurance?
Jerry: Because I spent my money on the Clapco 8000. It's the most powerful lock they make. It has only one design flaw...the door...MUST BE CLOSED!!

Jerry: How late are the stores open? I'm thinking of maybe of buying a new TV and smash it over my head.

Jerry: (giving house sitting instructions) One last thing, Benes. Regarding sexual activity...strictly prohibited, but, if you absolutely must, do us all a favor and do it in the tub.

Jerry: And I cannot overstate this: no soft cheeses of any kind. Is that clear?

George: I go to visit my grandparents. They're having big brisket sandwiches; I'm sitting here with a carrot!

Kramer: Now, I'm gonna go over there, I'm gonna borrow some tea. If I don't get back in five minutes, maybe you'd better call the police.
Jerry: OK, starting (looks at his watch)...NOW!
Kramer: Yeah! (runs off)

Elaine: You should at least take a look at this place. You shouldn't have to live like this.
Jerry: Like this? You just said you wanted to live here.
Elaine: Well, for me it's a step up. It's like moving from Iceland to Finland.

Jerry: (to Elaine) You would still wanna move in here?
Elaine: Yes! You don't understand. I'm living with Ethel Merman without the talent.

Jerry: Two bedrooms? Why do I need two bedrooms? I got enough trouble maintaining activity in one.

Jerry: The hot water takes a little while to come on. So, the best thing to do is to turn it on, do all your shopping, you come back and take a shower.

Elaine: Jerry, you can barbecue back here (points to garden).
Jerry: They deliver the coal?
Elaine: Sure, it's... probably the same guy, who delivers the wood.
Jerry: Oh, than I gotta tip him.

Diane: How, how could you guys have turned this place down, it's such a great location and it's so close to the park.
George: We're aware of the proximity to the park, yes.

Jerry: (turns around and sees George) How did you get in here?
George: (does some hand and arm motions)

This is the first episode of Seinfeld that was written another writer, rather than Jerry Seinfeld and Larry David.

Before leaving his apartment in Elaine's care, Jerry tells her that no meat should ever be kept in his fridge. However in the pilot episode, Kramer comes by to take meat for his sandwich and finds some in Jerry's fridge.

This is the first episode featuring Kramer's trademark entrance. Apparently, it was done accidentally as Michael Richards was late on his cue and he had to zoom into Jerry's apartment to make up for lost time.

The idea for the episode was inspired by Seinfeld's real-life experience of his apartment being robbed when he was a student. Instead of the door being unlocked, the burglars broke through the wall. Seinfeld has since commented that it was like being robbed by Superman.

While warming up the audience, Seinfeld improvised the routine about getting the middle finger. It worked so well that it was used in the opening stand-up segment instead of his prepared material.

This is the only episode in the first season not to be written by Larry David and Jerry Seinfeld.

Carolyn the waitress and her husband Larry are named after Seinfeld's real-life sister and brother-in-law.

When Jerry talks to Elaine about being the "master packer" a chair behind Elaine with a Yankees jacket draped on it moves around between shots.

When Jerry, Elaine and George meet the new owners of the apartment at the party, Jerry's right sleeve is alternately (not) rolled up.