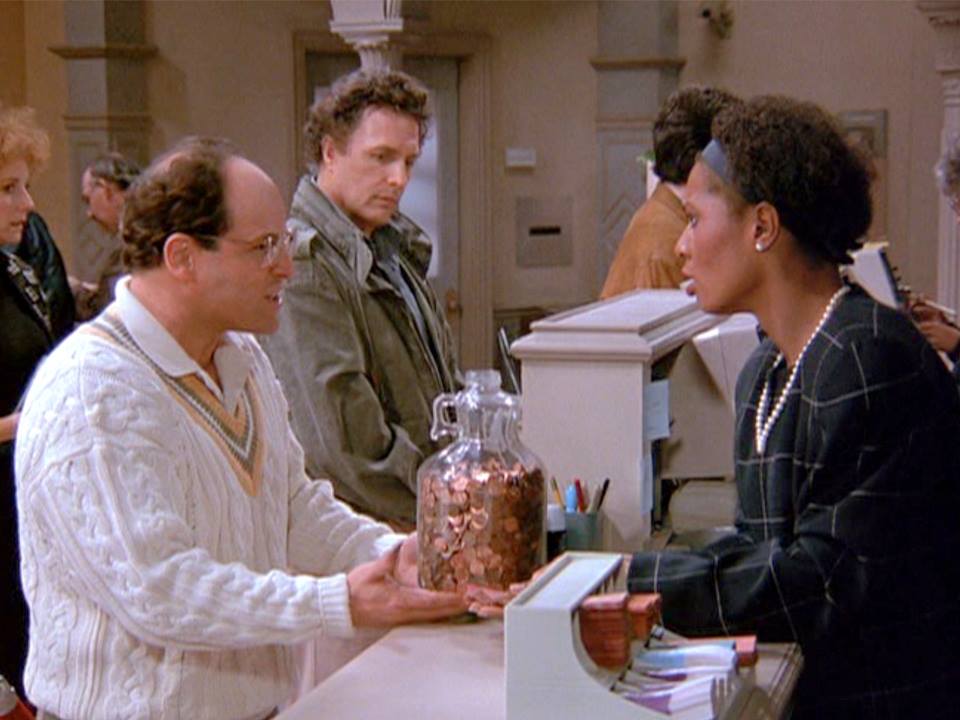 Jerry ponders a few courses of action when he sees that he no longer has anything in common with a clingy and obnoxious childhood friend. George has trouble with his latest relationship. Kramer has the idea to open a chain of pizza parlors where you make your own pizza pie.

George: She calls me up at my office, she says, 'We have to talk.'
Jerry: Uch, the four worst words in the English language.
George: That, or 'Whose bra is this?'

Elaine: Come on. Let's go do something. I don't want to just sit around here. Wanna get something to eat?
Jerry: Where?
Elaine: I don't care. I'm not hungry.
Jerry: We could go to one of those cappuccino places. They let you just sit there.
Elaine: What are we gonna do there, talk?
Jerry: We can talk.
Elaine: I'll go if I don't have to talk.
Jerry: Then we'll just sit there.

Jerry: (on George's fanny pack) Looks like your belt is digesting a small animal.

George: Can you change this (penny jug) into bills?
Bank Teller: I'm sorry sir, we can't do that.
George: Look, they did this for me before!
Bank Teller: Look, I can give you these (penny rolls) and you can roll them yourself.
George: You want me to roll 6,000 of these?! What should I quit my job?!

George: You can't have people shoving their arms into a 600 degree oven.
Kramer: It's all supervised!

Jerry: I was ten... I would've been friends with Stalin if he had a Ping-Pong table.

Jerry: Listen, Joel. I don't think we should see each other anymore.

Jerry: I'm really running out of excuses with this guy. I need some sort of "excuse Rolodex."

Jerry: I do not like the bank. I've heard the expression "Laughing all the way to the bank." I have never seen anyone actually doing it. And those bank lines. I hate it when there's nobody on the line at all, you know that part, you go to the bank, it's empty and you still have to go through the little maze. "Can you get a little piece of cheese for me? I'm almost at the front. I'd like a reward for this please."

Jerry: How can you talk to someone like that?
Joel: What are you saying? What, you like turkey roll?

Jerry: Most men like working on things. Tools, objects, fixing things. This is what men enjoy doing. Have you ever noticed a guy's out in his driveway working on something with tools, how all the other men in the neighborhood are magnetically drawn to this activity. They just come wandering out of the house like zombies. Men, it's true, men hear a drill, it's like a dog whistle. Just... (his head perks up) you know, they go running up to that living room curtain, "Honey, I think Jim's working on something over there." So they run over to the guy. Now they don't actually help the guy. No, they just want to hang around the area where work is being done. That's what men want to do. We want to watch the guy, we want to talk to him, we want to ask him dumb questions. You know, "What are you using, a Phillips-head?" You know, we feel involved. That's why when they have construction sites; they have to have those wood panel fences around it, that's just to keep the men out. They cut those little holes for us so we can see what the hell is going on. But if they don't cut those holes, we are climbing those fences. Right over there. "What are you using the steel girders down there? Yeah, that'll hold."

George: Why did I tell her I like her? I have this sick compulsion to tell women how I feel.

George: I know a guy who took a vacation on his change.
Jerry: Yeah, Where'd he go, an arcade?

In Jerry's kitchen there is no shelf dedicated to all of his cereal like there is in later episodes. There is just a space between the other cupboards.

In the opening scene, the hallway of Jerry's apartment building is different than other episodes.

There is an alternate ending for this episode where Joel asks Jerry if he can date Elaine. Also, after Joel departs, he returns to say that he will come back the following week to return a K.D. Lang tape.

Jerry's stand-up performance in this episode was filmed twice. Originally, the set was a brightly lit room. But it was decided that the nightclub set should continue to be used and the material was performed again.

In earlier drafts of the script, Kramer is actually named "Breckman".

According to the DVD notes, Kevin Dunn, the actor who plays Joel, was considered for the part of George Costanza.

The episode info provided by cable companies often mistakenly identify this episode as the series premiere.

If you exclude the pilot and the 100th episode special, this is the only episode that doesn't have the word "the" as the first word of its title.