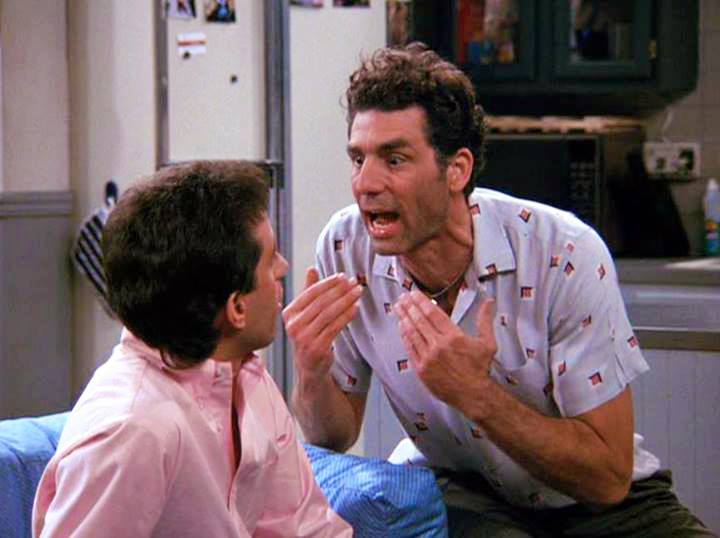 You could have invested in my roll-out tie dispenser!

Jerry and George invest based on an insider stock tip, but then lose touch with their inside source. A nervous Jerry lets the declining stock ruin his weekend away with Vanessa, while George decides he's all in.

Elaine: What evidence is there that cats are so smart anyway? What do they do? Because they're clean? I'm sorry. My uncle Pete showers four times a day and he can't count to 10 so don't give me hygiene.

Jerry: I think Superman probably has a very good sense of humor.
George: I never heard him say anything really funny.
Jerry: But it's common sense. He's got super strength, super speed... I'm sure he's got super humor.

Dry Cleaner: (to Jerry) May I help you?
Jerry: Yeah. I picked up this shirt here yesterday. It's completely shrunk. There's absolutely no way I can wear it.
Dry Cleaner: When did you bring it in?
Jerry: What's the difference? Look at it! Do you see the size of this shirt?
Dry Cleaner: You got a receipt?
Jerry: I can't find the receipt.
Dry Cleaner: You should get the receipt.
Jerry: Look, forget about the receipt, all right? Even if I had the receipt- look at it! It's a hand puppet. What am I gonna do with this?
Dry Cleaner: Yes, but how do I know we did the shirt?
Jerry: What do you think this is a little scam I have? I take this tiny shirt all over the city conning dry cleaners out of money? In fact, forget the money. I don't even want the money. Just once, I would like to hear a dry cleaner admit that something was their fault. That's what I want. I want an admission of guilt.
Dry Cleaner: Maybe you asked for it to be washed.
Jerry: No! Dry-cleaned!
Dry Cleaner: Let me explain to you something, okay? With certain types of fabrics, different chemicals can react, causing --
Jerry: You shrunk it! You know you shrunk it! Just tell me that you shrunk it!
Dry Cleaner: (looks around making sure not too many people are listening) I shrunk it.

During filming, Michael Richards played a practical joke on the rest of the cast. He entered Jerry's apartment with a woman who immediately began removing her clothes until she had stripped down to a g-string.

This is the first time Superman is mentioned on the show.

The character of "Vanessa" is a rare example of Jerry dating a woman for more than one episode. According to Larry David, "Vanessa" returned because she and Jerry had been dating at the end of "The Stake-Out." Since no break-up was ever shown, David decided to use the same character in another relationship storyline.

This was the last episode to be filmed at Ren-Mar Studios in Hollywood. From the second season on, all episodes were filmed at CBS Studio Center in Studio City.

In the beginning when George, Jerry, and Elaine are first talking at Monk's about the stock, George's drink fluctuates from half-full to full.

When Jerry and Vanessa are shopping for food a sign on the wall near the salad bar says "A la cart" instead of "A la carte".