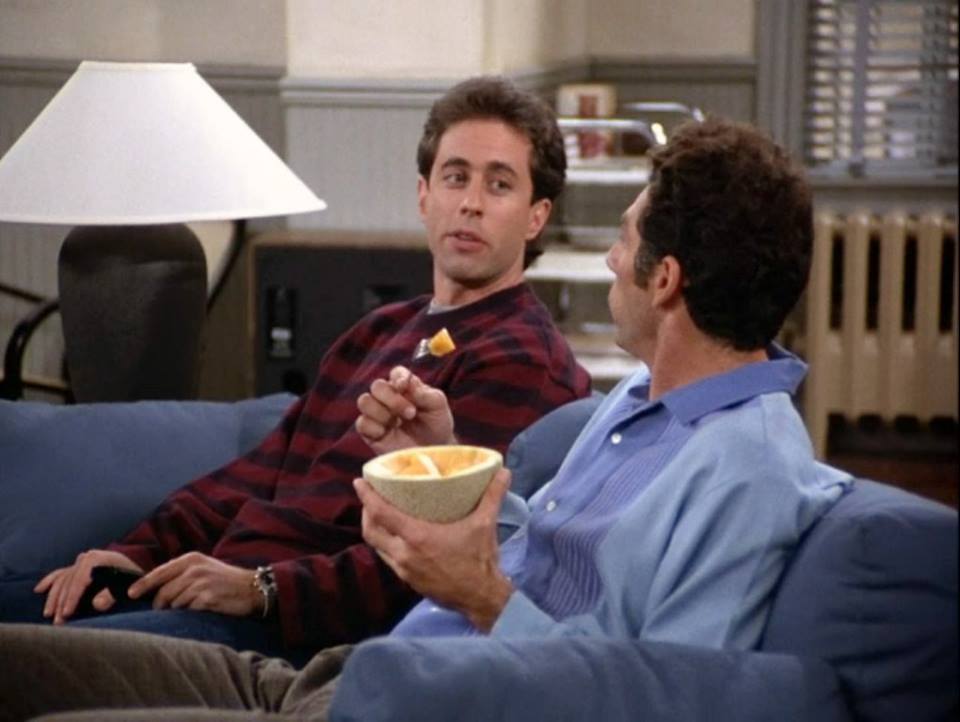 I don't return fruit. Fruit is a gamble. I know that going in.

Jerry begins to date George's ex - girlfriend before he discovers how clingy she is. Meanwhile George refuses to pay a physical therapist, convinced he did nothing and Elaine has a run - in with a friend who has stopped saying "hello" to her.

Jerry: What is this obsession people have with books? They put them in their houses like they're trophies. What do you need it for after you read it?

Jerry: I only eat cantaloupe at certain times.

Jerry: The waiting room. I hate when they make you wait in the room. 'Cause it says "Waiting Room." There's no chance of not waiting. 'Cause they call it the waiting room, they're gonna use it. They've got it. It's all set up for you to wait. And you sit there, you know, and you've got your little magazine. You pretend you're reading it, but you're really looking at the other people. You know, you're thinking about them. Things like, "I wonder what he's got. As soon as she goes, I'm getting her magazine." And then, they finally call you and it's a very exciting moment. They finally call you, and you stand up and you kinda look around at the other people in the room. "Well, I guess I've been chosen. I'll see you all later." You know, so you think you're going to see the doctor, but you're not, are you? No. You're going into the next waiting room

George: Look, do I have to break up with her in person? Can't I do it over the phone? I have no stomach for these things.
Jerry: You should just do it like a band-aid: one motion, right off!

Jerry: I'm always in traffic with the lane expert, you know this person? Constantly re-evaluating their lane choice. Never quite sure "is this the best lane for me for my life?". Always a little bit ahead of you; "can I get in over there, can I get ahead of you, can I get in there?". Yeah, come on over here pal, we're zooming over here! This is the secret lane, nobody knows about it.

Marlene: I can't be with someone if I don't respect what they do.
Jerry: You're a cashier!

George: I think you absolutely have to say something to this guy. Confront him.
Elaine: Really?
George: Yes.
Elaine: Would you do that?
George: If I was a different person.

Elaine: You're a little homophobic aren't ya?
George: Is it that obvious?

Jerry: You know, when you read Moby Dick the second time Ahab and the whale become good friends.

Jerry: I don't return fruit. Fruit's a gamble. I know that going in.

George: It was like I was making a prison break. You know... and I'm... I'm heading for the wall... and I trip and I twist my ankle... and they throw that light on you. So, somehow I get through the crying and I keep running. Then the cursing started. She's firing at me from the guard towers. (Mocks a rifle cocking) Son-of-a-bang... son-of-a-boom! I get to the top of the wall -- the front door. I open it up, I'm one-foot away, I take one last look around the penitentiary, and I jumped.

Jerry: A relationship is an organism. You created this thing and then you starved it, so it turned against you. Same thing happened to the Blob.

Jerry: The apartment elevators are always slower than the offices, because you don't have to be home on time.

George: I had nothing to do with any of this! I met all her friends, I didn't want to meet them. I kept trying to avoid it, I knew it would only get me in deeper, but they were everywhere! They kept popping up, all over the place. "This is Nancy, this is Susan, this is Amy.. This is my cusin.. this is my bruther.. this is my father..." It's like I'm in quicksand!

Elaine: Did you get a haircut?
Jerry: Nope. Shower.

This was the first episode to be filmed at Studio Center in Studio City, California.

Tracy Kolis, who plays Marlene, later plays the role of Kelly the waitress who lies about having a boyfriend to George in "The Soup" episode.

This episode's original airing was to be on 16 January 1991, but it was pre-empted by breaking news coverage of the outbreak of the first Gulf War.

The lemon wedge in Marlene's glass of tea is first in the glass then on the edge and back in the glass between shots.

Right before Kramer is going to take the cantaloupe back, he has half of it in his hand and the other half is on the counter. The shot goes to Jerry and Elaine then quickly back to Kramer. The half on the counter is now gone but Kramer did not have time to pick it up. Instead, there is now only a slice on the counter, which is what Elaine picks up later.