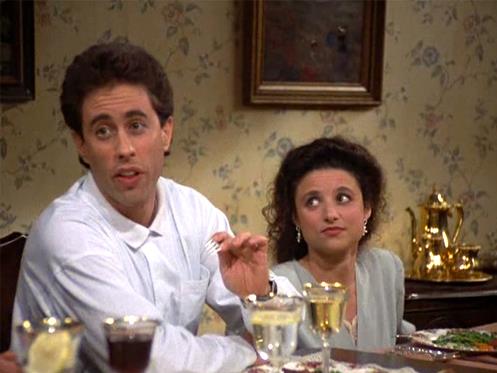 I hated those kids. In fact, I hate anyone that ever had a pony when they were growing up.

Jerry worries that he may have killed an old relative, after he offends her with an off-the-cuff comment about hating kids who had ponies growing up.

Jerry: I hate anybody who had a pony growing up.
Manya: I had a pony!
Jerry: Well, I didn't mean a pony per se...
Manya: When I was a little girl in Poland, we all had ponies. My sister had pony, my cousin had pony. So, what's wrong with that?
Jerry: Nothing. Nothing at all. I was just expressing...
Helen: Should we have coffee? Who's having coffee?
Manya: He was a beautiful pony. And I loved him!
Jerry: Well, I'm sure you did. Who wouldn't love a pony? Who wouldn't love a person who had a pony?
Manya: You! You said so!

George: I just don't see what purpose is it going to serve your going? I mean, you think dead people care who's at the funeral? They don't even know they're having a funeral. It's not like she's hanging out in the back going, "I can't believe Jerry didn't show up".
Elaine: Maybe she's there in spirit. How about that?
George: If you're a spirit, and you can travel to other dimensions and galaxies, and find out the mysteries of the universe, you think she's going to want to hang around Drexler's funeral home on Ocean Parkway?

Helen: (to Jerry) At least come and say hello, have a cup of coffee, then you'll leave.
Morty: How come he gets to leave?

(George, Jerry and Elaine are sitting at a table. Jerry and George are wearing baseball uniforms.)
George: Who gets picked off in softball? It's unheard of.
Jerry: It's never happened to me before.
Elaine: I remember saying to myself, "Why is Jerry so far off the base?"
Jerry: I'll have to live with this shame for the rest of my life.
(George consults his stat sheet of the game)
George: And then in the fifth inning, why did you take off on the pop fly?
Jerry: I thought there were two outs.
Elaine: I couldn't believe it when I saw you running. (laughing) I thought maybe they had changed the rules or something.
Jerry: It was the single worst moment of my life.
George: What about Sharon Besser?
Jerry: Oh, well, of course. Nineteen seventy three.
Elaine: Makes you wonder, though, doesn't it?
Jerry: Wonder about what?
Elaine: You know... (looking up) the spirit world.
Jerry: You think Manya showed up during the game and put a hex on me?
Elaine: I never saw anyone play like that.
Jerry: But I went to the funeral.
Elaine: Yeah, but that doesn't make up for killing her.
George: Maybe Manya missed the funeral because she was off visiting another galaxy that day.
Jerry: Don't you think she would've heard I was there?
George: Not necessarily.
(pause)
Jerry: Who figures an immigrant's gonna have a pony?
(Elaine laughs)

Jerry: I don't even know them. What is she, your second cousin? I mean, I've met them three times in my life.
Morty: I don't know her either. She makes me fly all the way from Florida for this, and then she criticizes my jacket.

George: I cannot envision any circumstance in which I however have the opportunity to have sex again.

Elaine: And what about the pony huh? What kind of abnormal animal is that?
Jerry: They're like big riding dogs.

Kramer: You don't think I can do it.
Jerry: I know that you can't, and I'm positive that you won't.

Jerry: He talks about him like he split the atom. He works for the Parks Department.

Jerry: I didn't know she had a pony. How was I to know she had a pony? Who figures an immigrant's going to have a pony? Do you know what the odds are on that? I mean, in all the pictures I saw of immigrants on boats coming into New York harbor, I never saw one of them sitting on a pony. Why would anybody come here if they had a pony? Who leaves a country packed with ponies to come to a non-pony country? It doesn't make sense.. am I wrong?

Jerry: If I have to sit next to Uncle Leo, I am leaving, He's always grabbin' my arm when he talks to me. That's probably because so many people have left in the middle of his conversation.

Jerry: These peas are bursting with country fresh flavor.

This is the first time "Cousin Jeffery" is mentioned.

Jerry is left handed, yet his baseball glove is for a right handed player.

At the end, while Jerry, George, and Elaine are at the dinner, Elaine places her hand over her mouth to control her laugh when Jerry remarked, "Who figures an immigrant is going to have a pony?"

When Morty sits on the couch with the remote on his chest, his hands are folded together, then suddenly resting at his sides.

When Manya first hears about the horses, her hands are on the table. In the next shot, her head is resting on one hand.

When Jerry is first apologizing for his comments about the horse, he leans forward. In the next shot, he is sitting up straight and starts to lean forward again.