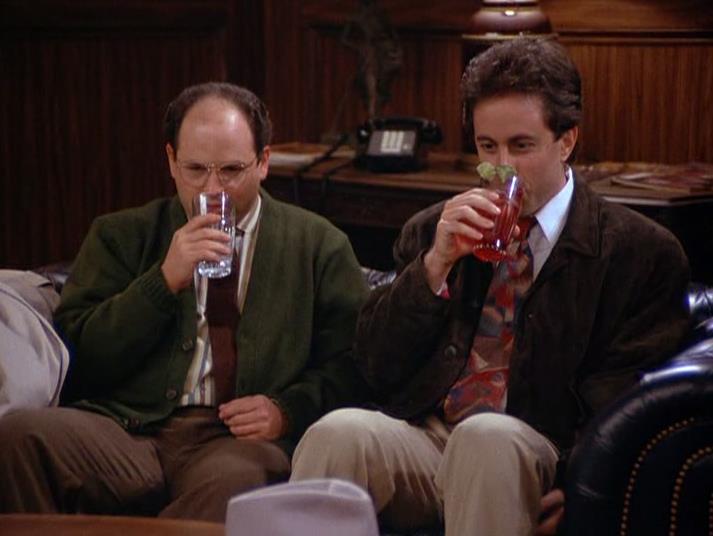 We had a funny guy with us in Korea: a tail gunner. They blew his brains out all over the Pacific.

Jerry splurges on an expensive new suede jacket, but the colorful inner lining leaves something to be desired. When Elaine does Kramer a favor, Jerry and George get stuck alone with Elaine's intimidating, curmudgeonly father.

Mr. Benes: We had a funny guy with us in Korea. Tailgunner. They blew his brains out all over the Pacific... There's nothing funny about that.

George: I just wanted to tell you that I really enjoyed Fair Game. I thought it was just brilliant.
Mr. Benes: Drivel.
George: Maybe some parts.
Mr. Benes: What parts?
George: The drivel parts.

Elaine: My father thinks George is gay.
Jerry: Because of all the singing?
Elaine: No, he pretty much thinks everyone is gay.

Jerry: This jacket has completely changed my life.
George: Can I say one thing to you? And I say this with an unblemished record of staunched heterosexuality. It's fabulous.

Jerry: I had a leather jacket that got ruined. Now, why does moisture ruin leather? I don't get this. Aren't cows outside most of the time? I don't understand it. When it's raining do cows go up to the farmhouse, "Let us in, we're all wearing leather. Open the door! We're gonna ruin the whole outfit here!" "Is it suede?" "I am suede, the whole thing is suede, I can't have this cleaned. It's all I got!"

Jerry: How are we going to get out of it?
George: We'll say we're frightened and we have to go home.

In a deleted scene from the episode Jerry is trying to decide upon buying the jacket when he finally remarks to Elaine, "Well, in the immortal words of Gary Gilmore, 'Let's do it'". Gary Gilmore was a serial killer who apparently uttered these words just prior to being executed.

This episode has the only mention of Elaine's mother in the series.

This episode introduces the running gag of George trying to restrain Jerry by pulling on his sleeve which Jerry responds to by yanking his arm away.

Laurence Tierney, who played Elaine's father, was never brought back for another episode even though the writers had originally considered him as a recurring character. Apparently, he stole a knife from the set. Also the rest of the cast a crew were terrified of him.

The character of Alton Benes is based on novelist Richard Yates (author of 'Revolutionary Road (2008)'), whose daughter Monica once dated Larry David.

As Jerry and George are walking out of the restaurant with Elaine and her father, George starts singing. Elaine's father tells George to quiet down. After this, George's glasses are gone that were present in the previous shot. Then, in the next shot, they reappear.

George pours himself a glass of water from a single serving bottle and he puts the empty bottle back in the fridge.

In one shot when Jerry, George, Alton, and Elaine are leaving the lobby, George goes from wearing to not wearing his glasses.