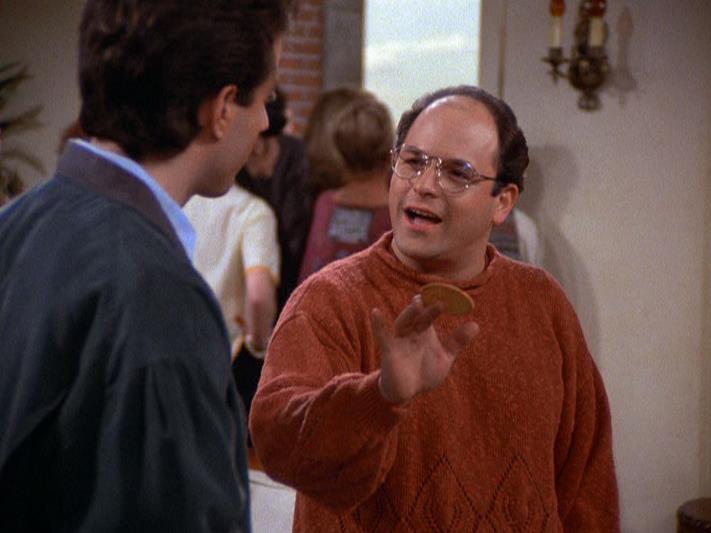 For I am Costanza. Lord of the idiots.

Jerry helps Elaine get the apartment above his, but later regrets doing so. George's experiment of wearing a wedding band to attract women goes horribly awry.

Jerry: The problem with talking is that nobody stops you from saying the wrong thing. I think life would be a lot better if it was like you're always making a movie. You mess up, somebody just walks on the set, and stops the whole shot. You know what I mean? Think of the things you wish you could take back. You're out somewhere with people, 'Gee, you look pregnant... are ya?' 'Cut, cut, cut, cut, cut, that's not gonna work at all. Walk out the door, and come back in. Let's take this whole scene again. People, think about what you're saying!'

Kramer: Well, occasionally I like to help the humans.

Jerry: Well, I painted my apartment again. I've been living in this apartment for years and years, and every time I paint it, it kinda gets me down. I look around, and I think, well, it's a little bit smaller now. You know, I realize it's just the thickness of the paint, but I'm aware of it. It just coming in and coming in. Every time I paint it, it's closer and closer. I don't even know where the wall outlets are anymore. I just look for like a lump with two slots in it. Kinda looks like a pig is trying to push his way through from the other side. That's where I plug in. My idea of the perfect living room would be the bridge on the Starship Enterprise. You know what I mean? Big chair, nice screen, remote control... That's why Star Trek really was the ultimate male fantasy. Just hurtling through space in your living room, watching TV. That's why all the aliens were always dropping in, because Kirk was the only one that had the big screen. They came over Friday nights, Klingon boxing, gotta be there.

Jerry: People don't turn down money! It's what separates us from the animals.

George: I lie every second of the day. My whole life is a sham.

Jerry: (to Kramer) You're not normal. I love you, but you're a pod.

Jerry: You know, I used to think that the universe is a random, chaotic, sequence of meaningless events, but I see now that there is reason and purpose to all things.
George: What happened to you?
Jerry: Religion, my friend, that's what happened to me.

Kramer: I feel like I've had two lives. My pre-mousse, and now I begin my post-mousse.

Jerry: You have no idea what an idiot is. Elaine just gave me a chance to get out and I didn't take it. This (pointing to himself) is an idiot.
George: Is that right? I just threw away a lifetime of guilt-free sex, and floor seats for every sporting event in Madison Square Garden. So please, a little respect, for I am Costanza, Lord of the Idiots.
Roxanne: (Yelling out the window) You're all winners!
George: But suddenly, a new contender has emerged.

George: I don't think anyone's turned down an apartment because of a weak shower spray.
Jerry: If they were fanatic about showers, they might.
George: For that rent, she'd take a bath in the toilet tank if she had to.

Jerry: Come in (the coffee shop) for two minutes and sit with me.
George: I was just in there. It's embarrassing.
Jerry: Oh, who's gonna know?
George: They saw me walk out.

Harold: It's a good thing her rent was overdue. She'd be rotting up there for a month.
Jerry: She died? Mrs. Hudwalker died?
Harold: Ninety-four years old. I found her yesterday. She didn't have a wig on... It was horrifying.

Harold: (to Manny) I told you I don't like these sponges -- they're too small! I want a big sponge! You can't pick up anything with these! There's no absorption!

Kramer: Tell me the truth: have you ever seen a better looking guy?
Jerry: Looks are so subjective.

Roxanne: The marathon is great, isn't it?
Jerry: Yes, particularly if you're not in it.

This episode features the only reference to Kramer's father.

This episode marks Elaine's first "Get out" shove. It became something she did regularly throughout the run of the series.

This episode was the show's return to air after a two month hiatus during which it was considered for cancellation. But it's new time slot after "Cheers" helped boost the show's ratings and get it renewed for a third season.

When Jerry and George watch the woman feed the baby, George's legs are crossed left over right, except for one shot when they are reversed.