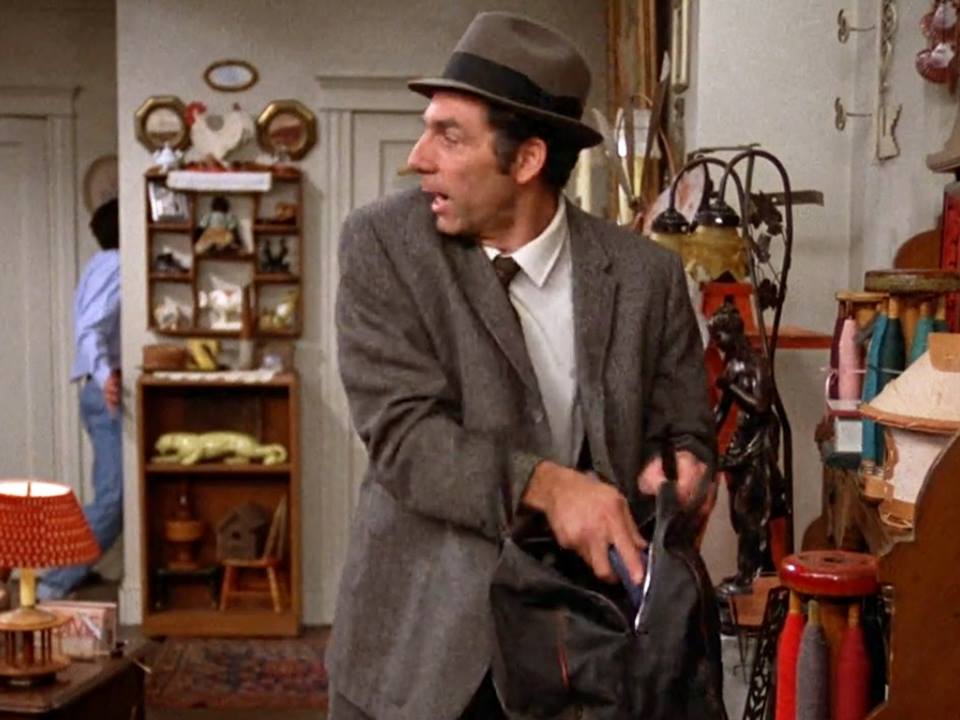 Today is your lucky day Junior, 'cuz I'm gonna let you off with just a warning!

Jerry finds a statue in a box of his grandfather's old things, that George wants to replace a similar one he broke as a child. When Jerry hires the boyfriend of an author Elaine is working with, to clean his apartment, the cleaning job is spectacular, but the statue goes missing.

George: (to Jerry about Ray) Remember, don't take any crap.

George: When I was ten years old, my parents had this very same statue on the mantle of our apartment. Exactly, and, one day, I grabbed it, and I was using it as a microphone. I was singing, "MacArthur Park", and I got to the part about, "I'll never have that recipe again," and it slipped out of my hand and it broke. My parents looked at me like I smashed the Ten Commandments. To this day, they bring it up. It was the single most damaging experience in my life, aside from seeing my father naked.

Man on Elevator: Will you put that cigarette out?!
Rava: Maybe I put it out on your face!

Rava: My mother left us when I was six years old--all seven of us. We never heard from her again. I hope she's rotting in an alley somewhere.
Jerry: My mom's down in Florida.

George: Students can't clean. It's anathema. (explaining) They don't like it.
Jerry: How long have you been waiting to squeeze that into a conversation?

Jerry: Well, perhaps we can take comfort in the knowledge that in the next world, Ray will be the recipient of a much larger and more harsh brand of justice.
George: Yeah, he'll have my parents.

Kramer: (shouting) And today's your lucky day, junior. Because I'm gonna let you off with just a warning! Any more of this criminal activity and you'll be sorry! You got me?
Ray: Got you? I don't know what the hell you're talking about!
Kramer: (slightly nervous) Good, good. Let's, uh, keep it that way.

George: There's just no justice. This experience has changed me! It's made me more cynical, more bitter, more jaded!
Jerry: Really?
George: Sure, why not...

Jerry: (to Rava) So, where's this boyfriend of yours? I can't wait much longer. I've got a flight.
Elaine: Oh, probably caught in traffic.
Rava: Or maybe he's dead.
Jerry: So what do you write, children's books?

Ray: Greetings, greetings and salutations! I beg your forgiveness, my tardiness was unavoidable. And you must be Jerry, Lord of the manor. My Liege, a pleasure to serve you. Your palace shall sparkle like the stars in the heaven upon your safe arrival, Sire.

This is the first time "Monk's" is used as the name of the coffee shop.

"Ok, break it up you knuckleheads" is a reference to the "Three Stooges".

Before the statue goes missing, George tells his parents to expect a "big surprise," but doesn't mention the statue specifically. Then, after it gets stolen, George is shown on the phone trying to explain the situation to his mother. He says that his mother feels like the statue was broken all over again. Why was it necessary for him to tell his mother about the statue once it was already stolen?

When Ray is meeting Jerry at Monk's, a plate of French toast suddenly pops up on his side of the table at one point of the conversation. Then a little while later a cup of coffee also appears, whose position randomly changes from being on his right to being in his front.