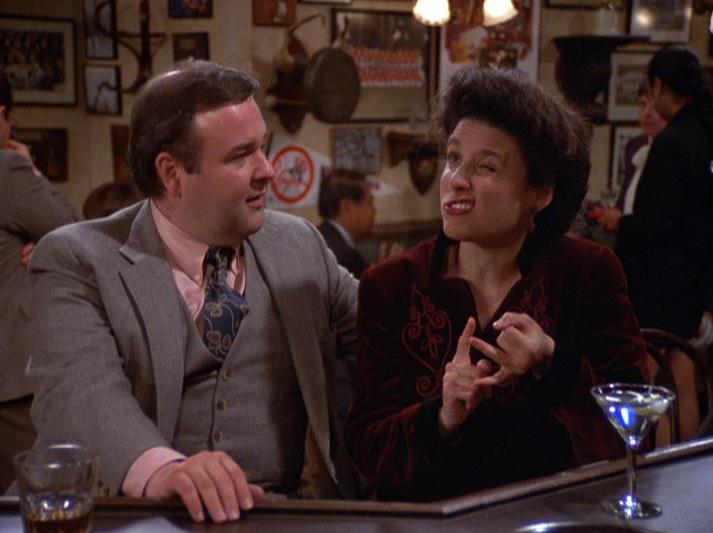 George quits his job in a huff, but comes to regret the decision, and is later humiliated by his boss. Jerry believes that the man at the laundromat has stolen a large sum of money from his laundry bag. Employing Elaine's and Kramer's help, respectively, they each plan revenge.

Jerry: The best revenge is living well.
George: There's no chance of that.

Jerry: So, anybody leaves anything here, you can just take it? You have a license to steal? You are like the James Bond of laundry?

George: This is just like what they do in the movies.

Kramer: Well... Newman jumped last night.
Jerry: What? Did you talk to him? What did you say?
Kramer: I said 'Wave when you pass my window.'

Jerry: You got a "mickey" source?

George: Don't worry. It's perfectly safe. I researched it. He'll get a little woozy. He might keel over.

Kramer: (about a suicidal friend) What am I supposed to do? Tell him how much there is to live for? Why should I lie to the guy?

Jerry: (about the laundromat's "Not Responsible For Items Lost Or Stolen" sign) Oh, I see, so you put up a sign and you can steal whatever you want. You're not a part of society.
Laundromat Owner: That's right, cause this is my country, I'm the president, and that's my constitution: "I'm not responsible."

George: I like horses. I could be a stable boy.
(thinking)
George: Nah, it's probably a union thing.

Newman: Kramer!
Kramer: Oh! That's Newman.
Newman: I'm on the roof!
Kramer: Well? What are you waiting for?
Kramer: You wanna shoot some pool tonight?
Newman: I can't, I'm goin' to the movies.

Rick: Is that Costanza over there?

George: I like sports. I could do something in sports.
Jerry: Uh-huh. Uh-huh. In what capacity?
George: You know, like the general manager of a baseball team or something.
Jerry: Yeah. Well, that - that could be tough to get.
George: Well, it doesn't even have to be the general manager. Maybe I could be like, an announcer. Like a colour man. You know how I always make those interesting comments during the game.
Jerry: Yeah. Yeah. You make good comments.
George: What about that?
Jerry: Well, they tend to give those jobs to ex-ballplayers and people that are, you know, in broadcasting.
George: Well, that's really not fair.
Jerry: I know. Well, okay. Okay. What else do you like?
George: Movies. I like to watch movies.
Jerry: Yeah. Yeah.
George: Do they pay people to watch movies?
Jerry: Projectionists.
George: That's true.
Jerry: But you gotta know how to work the projector.
George: Right.
Jerry: And it's probably a union thing.
George: (scoffs) Those unions. (sighs) Okay. Sports, movies... what about a talk show host?
Jerry: Talk show host. That's good.
George: I think I'd be good at that. I talk to people all the time. Someone even told me once they thought I'd be a good talk show host.
Jerry: Really?
George: Yeah. A couple of people. I don't get that, though. Where do you start?
Jerry: Well, that's where it gets tricky.
George: You can't just walk into a building and say "I wanna be a talk show host".
Jerry: I wouldn't think so.
George: It's all politics.
Jerry: All right, okay. Sports, movies, talk show host. What else?
George: This could have been a huge mistake.
Jerry: Well, it doesn't sound like you completely thought this through.

George: What about like an announcer? Like a color man? You know how I always make those interesting comments during the game?
Jerry: Yeah. Yeah. You make good comments.
George: So? What about that?
Jerry: Well, they tend to give those jobs to ex-ballplayers and, ya know, people in broadcasting.
George: That's really not fair.

Jerry: My guys don't know your guys! You can't just lock 'em all in the same machine together! They'll start a riot!
Kramer: Have you ever met my guys?
Jerry: No, I can't say as I have.
Kramer: We-ell!

Kramer states how Mr. Papanickolas from across the street saw Newman after he jumped. This name is taken from Pete Papanickolas, the key grip of the show.

George quitting his job and then walking back in as if nothing happened is similar to what Larry David actually did at SNL when his sketches were cut.

George being barred from the bathroom was inspired by writer Larry Charles's use of the private bathroom in Seinfeld and Larry David's office.

Michael Richards insisted on using real cement in the washing machine in order to portray the real physicality of carrying it.

We only hear Newman's voice when he is on the roof threatening to jump. In the original airing it was the voice of Larry David. After Wayne Knight was hired to play Newman, the voice was redone for syndication.

There is confusion regarding the name of Georges' boss. When George tells Jerry that he quit his job, he refers to his boss as "Levitan". However, at the staff meeting, the boss calls his company "Rick Bar Properties", and at the party, George calls him "Rick".

When Jerry first pays for his laundry, Vic is standing behind the desk. Jerry then goes over to talk to George, and Vic is suddenly at the far end of the room.

When Jerry and Kramer are at the laundromat to get revenge, Jerry is distracting the owner while Kramer puts the cement in the washer. At one point you see Kramer emptying the cement into the washer & the bag is almost empty. In the next shot Kramer is holding a full bag signaling to Jerry that the "job" is done.