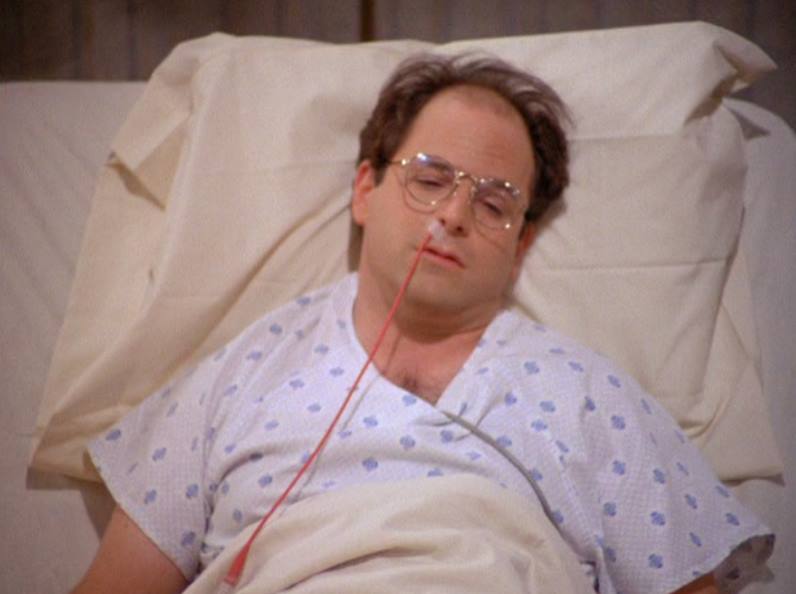 You know, they never gave me any ice cream...

George thinks he's had a heart attack. The doctor tells him otherwise, but he might want to get his tonsils and adenoids removed. Elaine is interested in the doctor and he is interested in her tongue. George not wanting to deal with the cost and the procedure decides to take Kramer's advice of going to see a naturalist, which only makes the situation worse.

Kramer: My name is Bob!

Tor: No. You know, I am not a business man. I'm a holistic healer. It's a calling, it's a gift. You see, it's in the best interest of the medical profession that you remain sick. You see, that insures good business. You're not a patient. You're a customer.
Jerry: And you're not a doctor, but you play one in real life.

Elaine: A kiss? With the tongue? The glossa with the bumps and the papillae? Yuck, I don't think so.

George: I've been going to the doctors my whole life and what's it got me? I'm thirty-three years old, I haven't outgrown the problems of puberty and I'm already facing the problems of old age.

Jerry: Yeah if you're exposed to gamma rays!

Jerry: (reading his note) 'Fax me some halibut.' Is that funny? Is that a joke?

Jerry: Eckman? I thought he was doing time?
Kramer: No, no, he's out. He got out.

George: Why can't I have a heart attack? I'm allowed.

Jerry: He saw that show on anorexia last year; ate like a pig for two weeks!

George: I went from having orgasms immediately to taking forever. You could do your taxes in the time it takes me to have an orgasm. I never had a nice, medium orgasm.
Jerry: I never had a really good pickle.

George: What should I do, Kramer?
Jerry: Well for one thing, don't listen to him.

Tor: (to Jerry) You're eating too much dairy.

Tor: What month were you born in?
George: April.
Tor: You should've been born in August.

Jerry: Well it's like the Capulets and the Montagues.

George: It's all over for me. In fact...let's end it right now. Jerry, kill me, kill me now. I'm begging you. Let's just get it over with. Be a pal. Just take the pillow and put it over my face.
Jerry: Well, uh...What? Kinda like this?
George (muffled) What are you doing?! What are you, crazy?!
Elaine: Jerry!
Jerry: Elaine! What are you doing here?

Tor: Kramer tells me you're looking for an alternative to surgery.
George: Yes. Yes I am.
Tor: (blows in George's face and then flicks his hair) I think we can help you.

Kramer: Boy, they've got a great cafeteria downstairs. Hot food, sandwiches, a salad bar. It's like a Sizzler's opened up a hospital!

Elaine: Hi, George, how you feeling? Is anybody getting your apartment?

Elaine: You're bringing in an outside cucumber?

Jerry: Women go after doctors like men go after models, they want someone with knowledge of the body, we just want the body.

Jerry was afraid that the joke might've been about Johnny Carson and/or The Tonight Show, which is where Jerry Seinfeld made his TV debut in real life, according to "The Seinfeld Story".

In this episode George says that he is 32, and in "The Stranded" (which took place around the same time period) Jerry tells Elaine that he is 36. Meanwhile how many times did Jerry and George say they grew up together? Jerry even says in one of the later seasons that him and George are only 4 months apart. Now that's a goof, and also I think the story of where they grew up changed a few times too, I mean was it Brooklyn or Long Island?

This is a rare episode where Jerry's apartment is shown but only Jerry is seen in it while the other three aren't.

Regarding Tor's lack of real medical knowledge, Jerry thinks to himself, "You're not a doctor, but you play one in real life." This is a reference to a popular 1970s advertisement for aspirin where Robert Young, the star of Marcus Welby, M.D., declared, "I'm not a doctor, but I play one on TV".

Pat Hazell, who plays the man in the other hospital bed, was a consultant to the show and regularly did the audience warm-up.

George, while talking to the patient next to him in the hospital, says he has never been to the doctor all his life except to get his tonsils out when he was a kid. In the next scene, while at the holistic place, he tells Jerry he has been going to the hospital all his life.

You can see Jerry begin to crack up after George calls him a "Jerk off".

Towards the end of the episode when 'purple' George is laying in the ambulance, he briefly lifts his head and there is a purple mark on the pillow where the makeup rubbed off from his neck.