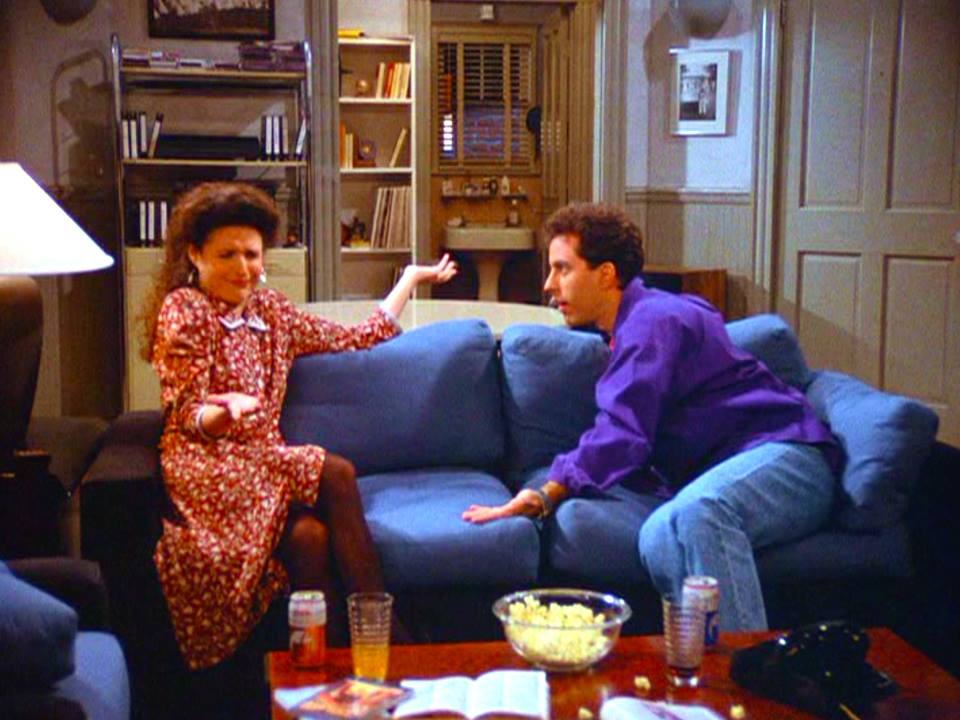 I mean, really, what is the big deal? We go in there. We're in there for a while. We come back out here. It's not complicated!

Jerry and Elaine establish a new set of ground rules so they can remain friends but still sleep with each other often. With Jerry in a dilemma to find Elaine an "appropriate" birthday gift and with George's scepticism, their new deal is doomed from the start.

Jerry: Sometimes when people get involved with that, they feel pressure to sleep over. When that is not really sleep. Sleep is separate from that and I don't see why sleep got all tied up and connected with that.

Kramer: What are you guys going to do today?
Elaine: This... and that.
Jerry: And the other!

Kramer: (to Jerry and Elaine) Boy, I liked you so much better when you weren't a couple.

George: What's up with you?
Jerry: Nothing much. I slept with Elaine last night.
George: Oxygen! I need some oxygen! This is major!

George: You know I gotta tell you. These are really bad details.

Jerry: (about Elaine's birthday) What did you end up getting her?
George: (irritated) $91.
Jerry: Yeah, sorry about that.

George: I know less about women...than anyone in the world. But one thing I do know is they're not happy if you don't spend the night.

Elaine: We just want to take this, and add that.

George: Where are you living? Are you here? Are you on this planet? It's impossible. It can't be done. Thousands of years people have been trying to have their cake and eat it too. So all of a sudden the two of you are going to come along and do it. Where do you get the ego? No one can do it. It can't be done.

Jerry: I mean, really, what is the big deal? We go in there. We're in there for a while. We come right back out here. It's not complicated!

Like many other episodes of Seinfeld this episode was based on a story from Larry David's life. In a DVD commentary he reveals that he actually tried setting up a "friends who do that" relationship with one of his female friends, complete with a list of rules to keep things from getting complicated.

This episode received an Emmy nomination for Outstanding Writing in a Comedy Series.

This was the final episode actually made in season two. Larry David thought the show was going to be cancelled, so he decided to end it with Jerry and Elaine back together as a couple, which is what NBC executives had been asking for. Ironically, NBC showed the final four episodes of the second season out of order. This episode was fourth from the last, so the final three episodes, having been made before this one, made no reference to Jerry and Elaine as boyfriend and girlfriend. And after the show was picked up for a third year, no further reference was made to Jerry and Elaine and their one episode reunion.

It is also rumored that the NBC executives wanted Jerry and Elaine to get together. However, after poor reviews of this episode, the idea was fully dropped.

Elaine, reading Kramer's birthday card, "Think where man's glory most begins and ends, and say my glory was I had such a friend." This is a reference to the Yeats' poem "The Municipal Gallery Revisited".

When George suggested a music box as a gift, Jerry replied, "No, too relationshippy. She opens it up, she hears that 'Lara's Theme', I'm dead." Jerry is referring to piece of music originally composed by Maurice Jarre for the 1965 movie "Doctor Zhivago".

In the store, when George is suggesting gifts for Jerry to give Elaine, he picks up a picture frame and suggests getting it for her. George continues to hold the frame while they joke about putting someone else's picture in it, and the camera cuts to Jerry. When it cuts back to George, the frame is back on the counter. Seems it's a case of poor editing.

When Jerry and Elaine are in Elaine's apartment and he starts to button his shirt, he buttons the second button from the top (not the two very top ones that would be buttoned with a tie, the one beneath). Afterward, the shot goes to Elaine and when it comes back to Jerry, the previously buttoned button is undone.