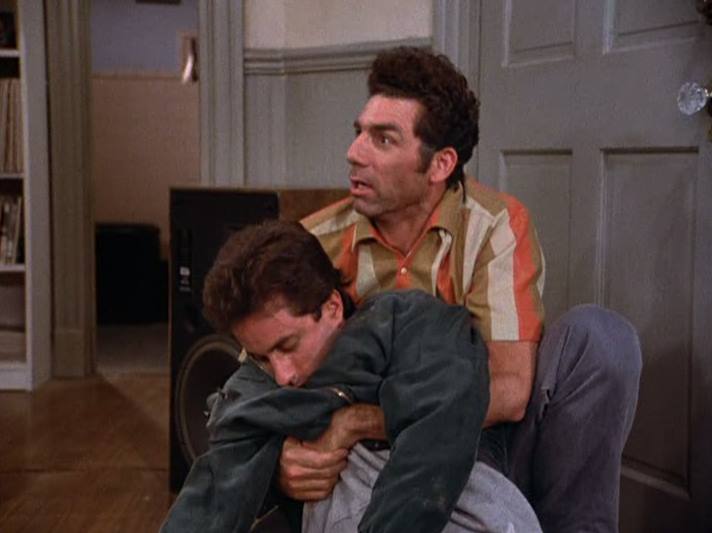 What have you done to my little cable boy?!

When Jerry goes out of town, Elaine uses his apartment for the baby shower of a woman George once dated. However, the party goes awry when Kramer shows up to install illegal cable, Jerry's trip is cancelled, and George intends to confront the mother-to-be for mistreating him on their date years earlier.

Jerry: What you're suggesting is illegal.
Kramer: It's not illegal!
Jerry: It's against the law.
Kramer: Well, yeah.

Leslie: Elaine, who catered this, Sears?

George: Every woman on the face of the Earth has complete control of my life and yet, I want them all. Is that irony?

Bill: My name is Bill. I might be the last person you ever see.

Kramer: Look, will you at least let me bring the guy over? He's an amazing man. He's a Russian immigrant. He escaped the Gulag! He's like the Sakharov of cable guys.

Jerry: Oh, fire engines, ambulances all along the runway. And then, when we landed safely, they all seemed so...disappointed.

Kramer: Yeah, I eat the whole apple. The core, stem, seeds, everything.

Kramer: (to Jerry) I'm offering you 53 channels, movies, sports, nudity, and it's free for life!

Jerry: Excuse me. Can I get something to drink?
Flight Attendant: I'm afraid not.
Jerry: What's with this airline? What, are you cutting out the drinks now?

Jerry: (to George) You're wearing the chocolate shirt!

Kramer: Cable boy. Cable boy. What have you done to my little cable boy?

The opening stand up piece in this episode by Jerry about "Men hunt and women nest" is used again in an actual show Jerry was shown to do in S05E20 "The Fire".

Christine Dunford who plays "Leslie" the woman for whom the baby shower is given, later plays the haughty "Saleswoman" in "The Pie". People might not have noticed, as she is a brunette in Season 2 and a blonde in season 5.

Bosco, the chocolate that stained George's sweater, is his ATM password in a later episode.

Kramer refers to the cable guy as "the Sakharov of cable guys". Of course, Andrei Sakharov was a genius Russian scientist who spent his life designing nuclear weapons for Russia.

When Kramer enters Jerry's apartment during the baby shower and Elaine asks him Who's this guy, the camera cuts to another angle and you see Kramer in the background talking, but the audio is of Elaine speaking, not Kramer.