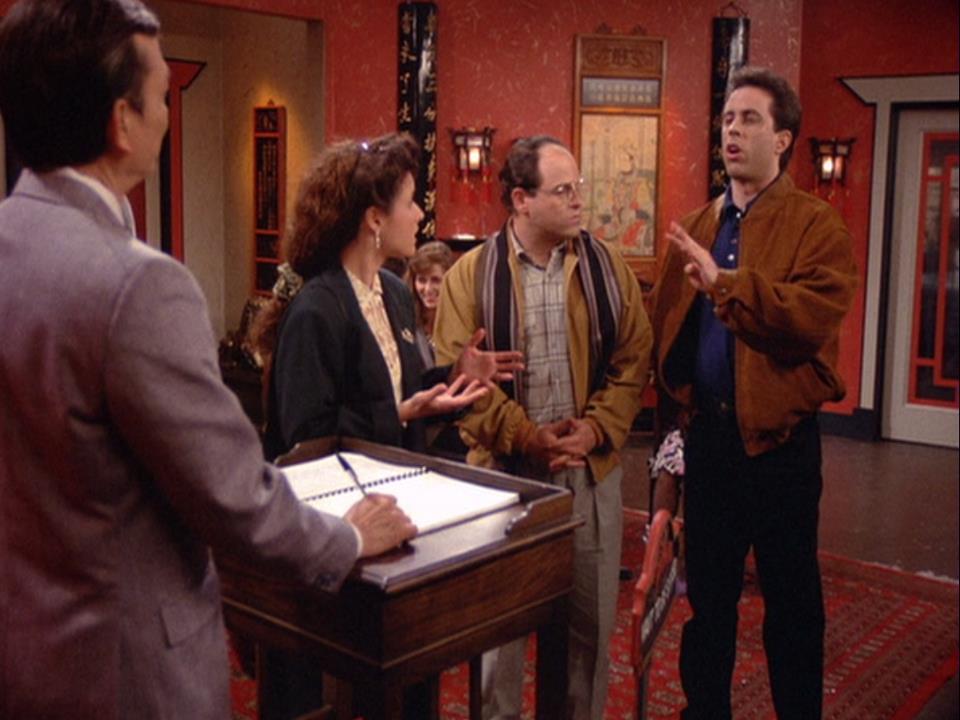 Jerry, Elaine, and George endure a series of misadventures while waiting the entire episode to get a table at a Chinese restaurant.

(After the restaurant owner makes George miss Tatiana's phone call.)
George: She called. He yelled 'Cartwright'. I missed her.
Jerry: Who's Cartwright?
George: (pause)...I'm Cartwright.
Jerry: You're not Cartwright.
George: OF COURSE I'M NOT CARTWRIGHT!

George: You're never gonna stop crime, we should at least be clean.

Jerry: I can't go to a bad movie by myself. What, am I gonna make sarcastic remarks to strangers?

Jerry: This isn't plans one through eight. It's Plan Nine! The worst movie EVER made!

Jerry: New York to Long Island. Long Island to Florida. It's like the Bermuda Triangle. Unfortunately no one ever disappears.

George: So, we start to fool around and I begin to perceive this impending... intestinal requirement whose needs are going to surpass by great length anything in the sexual realm.

Elaine: Remember when you first went out to eat with your parents? Remember, it was such a treat. You go and they serve you this different food that you never saw before. They put it in front of you and it was such a delicious and exciting adventure... and now I just feel like a big sweaty hog waiting for them to fill up the trough.

Elaine: You ever notice how happy people are when they finally get a table? They feel so special because they've been chosen. It's enough to make you SICK!!
Jerry: Boy. You are REALLY hungry.

Elaine: Movie theater hot dogs, I'd rather lick the food off the floor.

George: If anything happens here can I count on you?
Jerry: What?
George: If we decide to go at it.
Jerry: Yeah, I want to get into a rumble.

Bruce: I tell her you not here, she say curse word, I hang up.

George: The only excuse she might possibly have accepted is if I told her I am in reality Batman, and I'm very sorry I just saw the Bat-signal!

Jerry: The Women's Movement just can't seem to make any progress in the world of bribery, can they?

George: Yes, I'm expecting a call for Costanza.
Bruce: Yes, someone call. I say "Cartwright! Cartright!" but no one come and I hang up.

After Jerry bets Elaine $50 to eat food off a strangers table she tries offering them $25 speaking through her teeth with a smile on her face the whole time. Afterwards the group starts to ask each other what she said. If you listen you can make out Larry David's voice added to the mix.

Jerry, George and Elaine are not the only ones have trouble getting a table. Norman Brenner (Michael Richards' stand-in) can be seen sitting by the door waiting for a table when the gang enters; he is still waiting there when the gang walks out.

Kramer does not appear in this episode. At this point in the series, it was established that Kramer had not left the apartment building in many years. Michael Richards expressed his disappointment at not being included in the episode because he felt it was the series' best episode at the time.

Jerry mentions his sister. She is never mentioned again in the series.

NBC felt that the episode was uninteresting and did not want to air it. Eventually the network agreed to air the episode, but it was relegated to the end of the season. The network's response was parodied in the season four episode "The Pitch", where Jerry suggests an episode very much like this one but the NBC executives are not impressed.