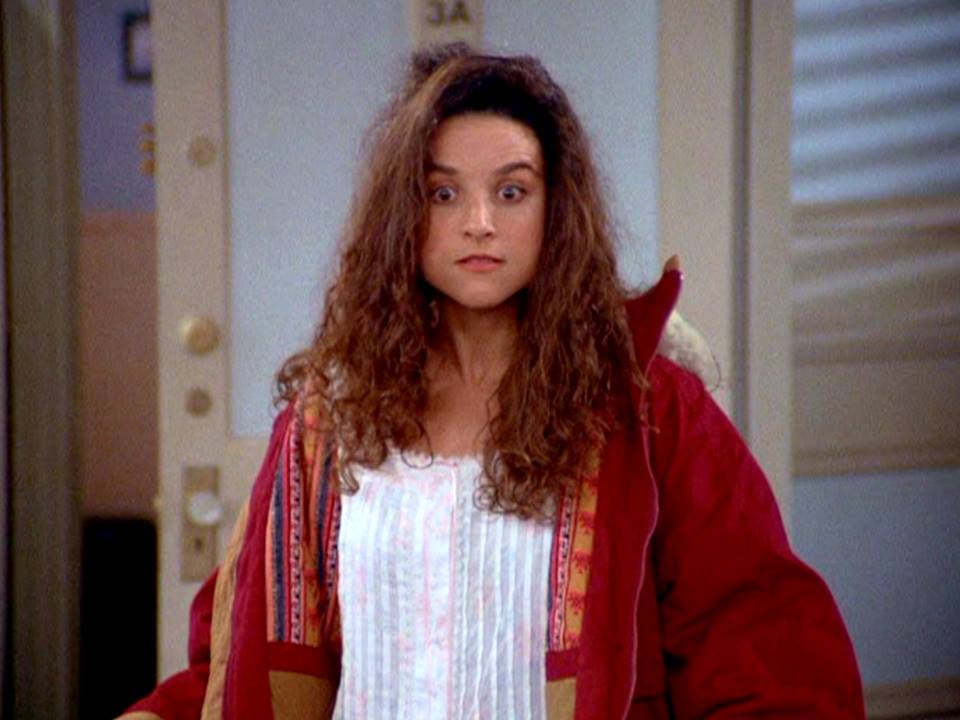 They say no one's ever beaten the Van Wyck... but, gentlemen, I tell you this: I came as close as anyone ever has.

George continuously yet inadvertently meddles in the life of a busboy. Elaine has a man come to visit her for a week, we she soon finds is far too long for her liking.

Antonio: Who left the door open?

Elaine: I never knew I could drive like that. I was going faster than I've ever gone before, and yet, it all seemed to be happening in slow motion. I was seeing three and four moves ahead, weaving in and out of lanes like an Olympic skier on a gold medal run. I knew I was challenging the very laws of physics. At Queens Boulevard, I took the shoulder. At Jewel Avenue, I used the median. I had it. I was there. And then, I hit the Van Wyck. They say no one's ever beaten the Van Wyck, but gentlemen, I tell you this... I came as close as anyone ever has. And if it hadn't been for that five-car pile-up on Rockaway Boulevard, that numbskull would be on a plane for Seattle right now instead of looking for a parking space downstairs.

Jerry: Are you still using that same old alarm clock?
Elaine: Oh no no, I bought a new one today. It's got everything! You oversleep more than ten minutes, a hand comes out and slaps you in the face.

Jerry: They'll probably kill his family over this.

Elaine: He's a wonderful guy, but I hate his guts.

Elaine: If I don't get this guy on a plane to Seattle and out of my life, I'm gonna kill him, and everyone who tries to stop me.

Kramer: Cats run away all the time. You know, my aunt, she had a cat. Ran away. Showed up three years later. You never know. They've got things in their brains where they remember where they're from. Unless, of course, somebody else starts feeding him. See, that's what you've gotta worry about.

Jerry: Look I feel sorry for him too, but he'll get another job. I mean let's face it, it's not a profession in which you embellish your resume and undergo a series of gruelling interviews.

According to George, the best public restroom is near 65th St & 10th Ave in Lincoln Center. In Manhattan, there is no such intersection as 65th & 10th.

This is the show's first look at Elaine's apartment. Also, it is the first scene of the series in which Elaine is seen without Jerry.

At the end of the episode Elaine, George, and Jerry are sitting in the coffee shop and the ketchup moves from inside by Jerry to the outside of the table when Elaine's to-go order is put on the table.

When George gives Antonio his business card he tells him that he is in real estate, but of course he quit that job in the episode 'The Revenge'. This is due to the shows being aired out of production order.

When the busboy enters Jerry's apartment at the end, the apartment number on Jerry's door is 3A, not the normal 5A.

Antonio's cat is named "Pequita". This is also a name for a drink made with orange juice, key lime juice, tequila and grenadine.

This episode was noted by the supporting cast in an interview used for a DVD set as the first sign that Jerry would be a generous writer, being very good about including his co-stars into story lines. In fact, Jerry doesn't even have a story line. The episode is the first to show George and Kramer alone together, Elaine without Jerry, and a scene not including Jerry.

The original script had Jerry, George, and Elaine and Jerry picking their least favorite holiday as they enter the restaurant. Jerry picked New Year's Eve, George picked Halloween, and Elaine picked the Fourth of July.

The off-screen fight between Eddie and Antonio was the first time two different stories collided at the end of a Seinfeld show. This type of storytelling would become a Seinfeld trademark for years.

The overhead shot of Elaine in bed shows her male friend taking the covers, in the side shot they are both fully covered by the bed covers.

When Jerry says, "I didn't say anything," he is chewing on a bite of spaghetti. In the next shot, his mouth is empty and he is reaching for a piece of bread.

When Jerry says, "How much longer is this going to take?" Bruce's hands are raised. In the next shot, they are resting on the podium.