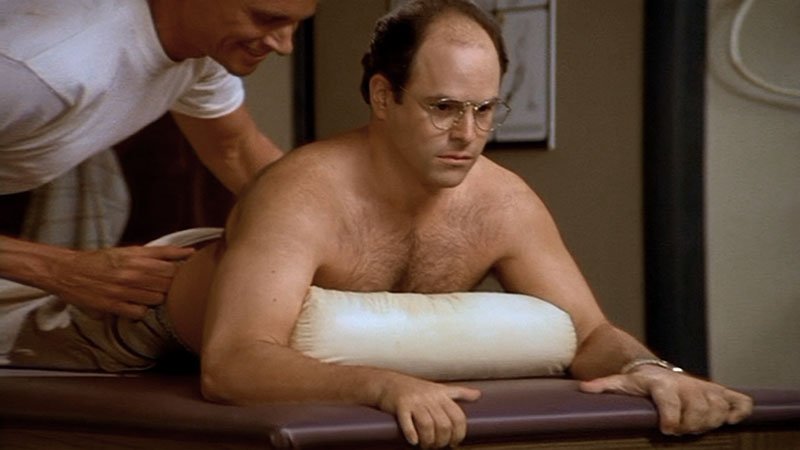 I think it moved.

Jerry and George's massages end up being more pain than pleasure when Jerry has a misunderstanding with the masseusse and George gets his massage from a man. Jerry and George get Jerry's dentist friend into trouble when they ask him for doctor's notes for physical therapy. Meanwhile, Kramer is convinced he's seen Joe DiMaggio in a neighbourhood donut shop.

George: I think it moved.

Kramer: Why can't Joe DiMaggio have a donut like everyone else?

George: I can't get a massage from a man.

George: (talking about getting a message from a man) What if it feels good?
Elaine: It's supposed to feel good.
George: I don't want it to feel good!

George: It was imperceptible, but I felt it!

George: I've shifted, this was a move!

Elaine: She doesn't want to hear that, that was stupid.
Jerry: I know it was stupid.
Elaine: Really stupid...

Raymond: I used to be a flight attendant.
George: Oh boy.
Raymond: Ya know, why don't you open those pants, it's gonna be a lot easier that way.

George: A man gave me a massage.
Jerry: So?
George: So he had his hands and, uh, he was...
Jerry: He was what?
George: He was... touching and rubbing.

George: Men have been popping into my sexual fantasies. All of a sudden, I'll be in the middle.
Elaine: Of what? Oh.
George: And a guy will appear from out of nowhere. I say "Get out of here! What do you want? You don't belong here!"

Pam: I hope you're both happy.
Jerry: I'm not happy.
George: Me neither. I've never been happy.
Jerry: I mean I'm happy sometimes, but not now.
George: In college, maybe. Those were fun times.
Jerry: Yeah, college was fun.

Kramer: How can you do that to your friend! He's got a wife, kids...and a lot of other stuff! Yeee-eah...

This episode featured a different version of the theme song, the first change since the pilot. Back-up singers were now heard scatting over the theme. The singers were added by composer Jonathan Wolff at Seinfeld's request. However, NBC and Castle Rock did not like the change and requested that the original version be restored.

This episode marks the first time Kramer comes into the diner.

Very bad cut from when Jerry and George go to the Physical Therapist and George sees Raymond. He begins to turn to Jerry, but then there's a cut to his head already 45 degrees ahead of where it was before.

George unbuttons his pants a first time when he's lying on his stomach, then later when the masseur asks him to take them off, George stands up and his pants are buttoned again.

In the final scene, as Jerry asks Kramer, "Did he say anything?" you can clearly see Jerry's left hand is empty at the left side of the screen. In the next shot, a blue container mysteriously appears in his left hand.

In the final scene of the episode at Monk's, where the four are watching Joe DiMaggio dunk his donuts, when Kramer starts to bang on the table and yell Julia Louis-Dreyfus almost loses it as she's laughing so hard. If you watch closely she actually looks right into the camera as she is trying to keep herself from laughing too much. She is probably thinking the scene will get cut for a re-take.

Joshua Liebling, who plays Billy (the son of the masseuse), is Seinfeld's real-life nephew.

George also says "I think it moved" in "The Mango", after eating a piece of Kramer's mango.

When Kramer starts to bang on the table and yelp, Julia Louis-Dreyfus can be seen breaking character by laughing and looking at the camera.