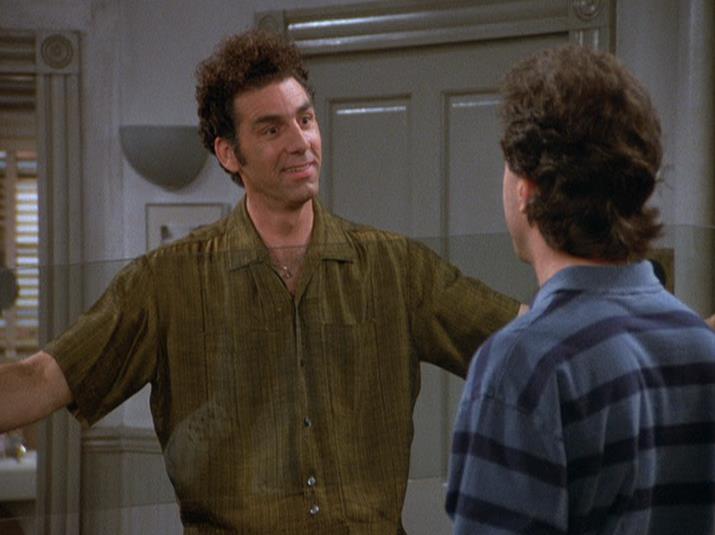 Can you believe somebody threw this out?

Jerry's audit becomes more trouble than he can handle when George breaks up with the former IRS worker who was helping Jerry, and she ends up in a sanitorium. Meanwhile, Kramer and Elaine have trouble getting along while Kramer dates Elaine's roommate.

Jerry: Have you ever been audited? It's hell. It's the financial equivalent of a complete rectal examination.

Elaine: What did you think, that would impress me?
Jerry: You got it all wrong! I was thinking only of the poor Krakatoans!
Elaine: Like you give this donation for 50 bucks and I'd start tearing my clothes off?
Jerry: Those brave Krakatoans... East of Java! Who sacrificed so much for so long!

Jerry: I was audited last year. At first I thought well, IRS kinda sounds like Toys 'R Us maybe won't be so bad.

Elaine: Who walks into a women's bedroom without knocking?! I wanna know.
Kramer: I thought it was a closet.

Elaine: You're extremely...careful...with money.
George: I'm cheap? You think I'm CHEAP? How could you say that to me? I can't
believe this. How could you say that to me?
Elaine: You asked me to!
George: You should have lied!
Elaine: HUH, so should you.
George: I mean I'm not really working right now.
Elaine: I know.
George: When I was working I SPENT baby!
Jerry: Yeah, I know champagne, limos, cigars.

(all to Elaine)
Kramer: So is everything cool?
Tina: Yea, you seem a bit dysfunctional.

George: The truth? You want the truth? It is your earrings! It is the chopsticks, but it's so much more! You're pretentious! You call everyone by their full name! You call my doorman, Sammy, "Samuel" but you didn't even say "Samuel", you went "Samuelle!" Papie-ay mach-ay? What is papie-ay mach-ay?

George: My whole life has been a complete waste of time.
Jerry: And there's so much more to go.

Jerry: My cousin Douglas was in a place like this one time. He came over to my house for dinner. There was no soda and he went berserk. He was screaming. "Where's the Pepsi, where's the Pepsi?"

Jerry: The IRS! They're like the Mafia! They can take anything they want!

Kramer: I don't even pay taxes.
Jerry: Well that's easy when you have no income.

Elaine: And now you're being audited for it. See, that's Karma.
Jerry: No, that's Kramer.

George: I've driven women to lesbianism before but never to a mental institution.

Elaine: What is this?
Kramer: Well, it's a windshield. It's going to be your new coffee table.
Elaine: Ah, I'm going to kill myself on that thing. You can't even see it.
Jerry: You'll sense it.

In the scene where Kramer and his girlfriend break the table, the sound made by the breaking windshield resembles more of the sound that would be made by a breaking window.

This is the first episode where, during the credits, aren't just still images of Jerry.

This episode marks the genesis of Kramer's fascination with coffee tables. He finds a windshield in the street and makes a coffee table out of it, which he and Elaine's roommate eventually fall on.

When Jerry says, "Those brave Krakatoans, east of Java", he is referring to the 1969 disaster film "Krakatoa, East of Java". Incidentally, Krakatoa is actually west of Java.

When George breaks up with his girlfriend, she exclaims "You hate my earrings, don't you?" and gestures at both of her ears. However, she is actually only wearing one earring.

When George raises his voice in the clinic and says "I'm not lying," two members of the staff are shown looking on. However, in the next wide shot, they disappear entirely.

When Elaine enters her apartment and discovers the African music playing and the kitchen a mess, there is a cut to the kitchen window, and a crew member is clearly seen exiting on screen left as the camera is panning left.

When Elaine enters her apartment and Kramer is dancing around to African music, his girlfriend can be seen in the bedroom waiting to make an entrance.