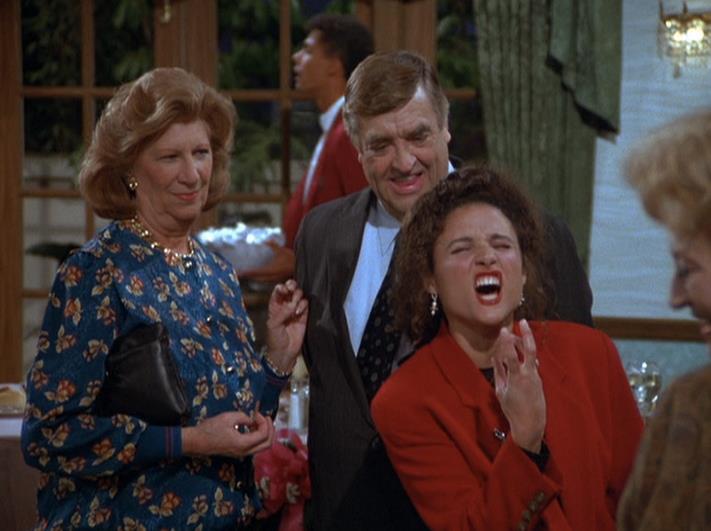 Jerry and Elaine travel to Florida to see Jerry's parents which they soon regret when Elaine injures her back on a fold - out couch and Jerry gets caught up in a scandal by just saying that he liked someone's pen.

Jerry: (to Elaine) It's one day. Half a day, really. I mean you subtract showers and meals, it's like twenty minutes.

Jack: What happened to you?
Jerry: I got in a fist fight with one of the ladies at the pool.
Helen: It's from scuba diving.
Jack: What's there to see underwater?

Jerry: I'm sleeping on a loveseat. I got my feet up in the air like I'm in a space capsule!

Jerry: I liked it. Should I have said I didn't like it?
Helen: You shouldn't have said anything. What did you expect him to do?
Jerry: He could have said: "Thank you, I like it too" and put it back in his pocket.

Helen: Why'd you take his pen for?

Jerry: (to his parents) What is going on in this community? Are you people aware of what's happening? What is driving you to this behavior? Is it the humidity? Is it the Muzak? Is it the white shoes?!

Jack: Do you think I take everything everybody offers me? You offered me sponge cake yesterday. Did I take it?
Morty: You said you didn't want it!
Jack: Of course I wanted it! I love sponge cake!
Morty: Then who the hell said you couldn't have any? I mean what the hell do I care whether you have sponge cake?
Jack: Because I saw the look on your face last week when I took the scotch tape!
Morty: Ahh! So you got the scotch tape! I've been looking all over for it!

Helen: You're going underwater?
Jerry: Yes. Generally that's where scuba diving is done.
Helen: What do you have to go underwater for? What's down there that's so special?

Stella: This better be good; I'm missing Golden Girls for this!
Helen: I hate her like poison.

Larry David learned of the pen that writes upside down from executive producer George Shapiro who owned one. He gave it to David during a meeting.

Jerry sleeping on sofa cushions on the floor was inspired by Seinfeld's real-life experience. When visiting his mother, Jerry Seinfeld would sleep this way to avoid the uncomfortable sofa bed.

This is the only episode in the entire series where Jason Alexander does not appear. On the DVD interview, Jason Alexander confesses he was furious with Larry David for not writing him into this episode, and insisted that he must be in every future show, even just for a bit part.

This is one of two episodes in the series where Michael Richards doesn't appear. The other episode he was absent was "The Chinese Restaurant".

This is the first appearance by Sandy Baron (Jack Klompus). He was in 5 episodes.

At the ceremony, Larry David's voice can be heard yelling: "Hey Jack let's get started!" and "I'd rather have a bottle of scotch!"

When Elaine is on muscle relaxers and yells out "Stella!" it is a reference to the Tennessee William's play (and movie) "A Streetcar Named Desire".

This episode shows Uncle Leo as married to Stella, but no explanation is ever given as to why he is single in later episodes.

You can clearly see part of the set two times in this episode that you're not supposed to see at all. The mistakes occur during the night time. Looking out of the door of the Seinfeld's condo you can see the light reflecting off of the background meaning it's only a painting, and fake. Also note the shadows behind Jack and Jerry during the dinner are one dimensional when there was a railing back there.