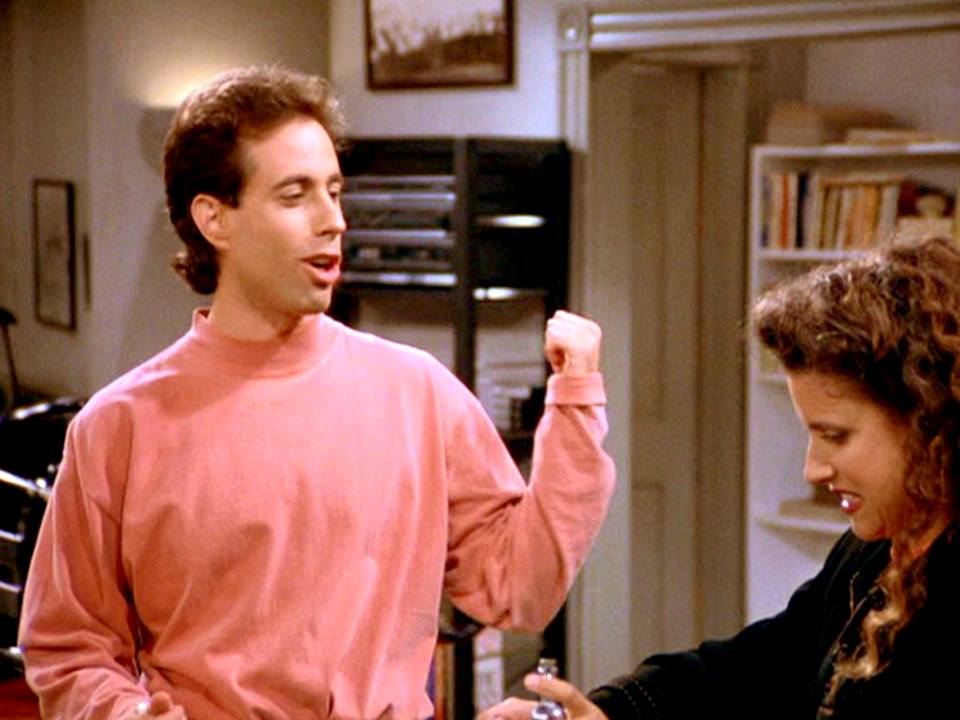 Two-hundred seats on a plane and I gotta wind up next to Yukon Jack and his dog Cujo!

When a fellow airline passenger is sent to hospital, Jerry gets stuck watching his unruly dog for several days. With Jerry stuck in his apartment, George and Elaine discover they have very little to talk about on their own. Meanwhile, Kramer has difficulty breaking up with his girlfriend.

Jerry: (doing stand-up) I had a parakeet when I was a kid, that was the only pet that I really enjoyed. We used to let him out of his cage, and he would fly around and my mother had built, one entire wall of our living room was mirrored. She felt this gives you a feeling of space. Have you ever heard this interior design principle that a mirror makes it seem like you have an entire other room? What kind of a jerk walks up to a mirror and goes, "Hey look, there's a whole other room in there. There's a guy in there looks just like me." But the parakeet will fall for this, you'll let him out of his cage, he flies around the room, BANG! With his little head, he would just go 'click' Ohh! And I'd always think, even if he thinks the mirror is another room, why doesn't he at least try to avoid hitting the other parakeet?

Kramer: (on breaking up with his girlfriend) Oh yeah! The sooner the better. I can't wait to do it. You know how there's some people you worry about whether or not you're gonna hurt their feelings? With her, I'm looking forward to it. Boy, I'd like to get it on video. Watch it in slow motion and freeze frame it!

Jerry: Great. Two hundred seats on a plane, and I gotta get stuck next to Yukon Jack and his dog, Cujo!

Kramer: (to Ellen) I must've been out of my mind! Look at you. Why don't you do something with your life? You sit around here all day. You contribute nothing to society. You're just taking up space. How could I be with someone like you? I wouldn't respect myself.

Jerry: One more day Farfle and you are pound bound!

Jerry: What'd we say that was so bad?
Elaine: I believe I referred to her personality as a potential science exhibit.
Jerry: I said I was surprised no one killed her yet.

Elaine: This is not Seinfeld you're dealing with! When I'm through with you you'll be begging to go to the pound!

Jerry: You can't tell someone how you feel about their girlfriend until after they stop seeing them.
Kramer: I tell you.
Jerry: You. I'm talking about people.

Jerry: Talk amongst yourselves, I'm gonna go to the bathroom.
George: Uh Jerry, how long will you be in there?
Jerry: I don't know, regular human time?
George: Uh why don't you wait then go in the movies?
Jerry: Why shouldn't I go here?
Elaine: Well, you know, I mean, sometimes it's good to get there and make sure you get your seats and then go to the bathroom.
George: And isn't it more fun using the urinal?
Elaine: Yeah.
Jerry: Oh yeah, urinals are fun. Can I go?!

Elaine: Jerry, do you know what they do to dogs at the pound? They keep them for a week and then if no one claims them, they kill 'em.
Jerry: Really? How late are they open?

Elaine: Hello? No, who's calling? Oh my god, the dog guy. Where have you been? Yeah, well you better pick up your dog tonight or he has humped his last leg.

Gavin: Do you have any pets?
Jerry: Just a next-door neighbor.

In this episode George says, "Isn't it more fun using the urinal?" However, in a previous episode he claimed to be a "stall guy."

It is unusual that there is no bicycle hanging in Jerry's hallway.

Jerry refers to the dog as Cujo. This is a reference to the dog in the Stephen King novel and 1983 film of the same name.

The dog Jerry is minding is named "Farfel". While discussing the dog with Jerry (and the dog is barking), Elaine is making chocolate milk. "Farfel" was actually the name of a dog puppet famous for his Nestle Quick commercials.

The fictional film "Prognosis: Negative" is named after an unproduced screenplay by Larry David in which the main character wrongly assumes a negative prognosis is bad news.

When George and Jerry are waiting in line at the movie theater, the position of the movie poster behind them keeps changing between shots.

When George and Elaine are talking in the cafe Elaine is wearing a bracelet on her left wrist., but it switches to the right wrist in the next shot.