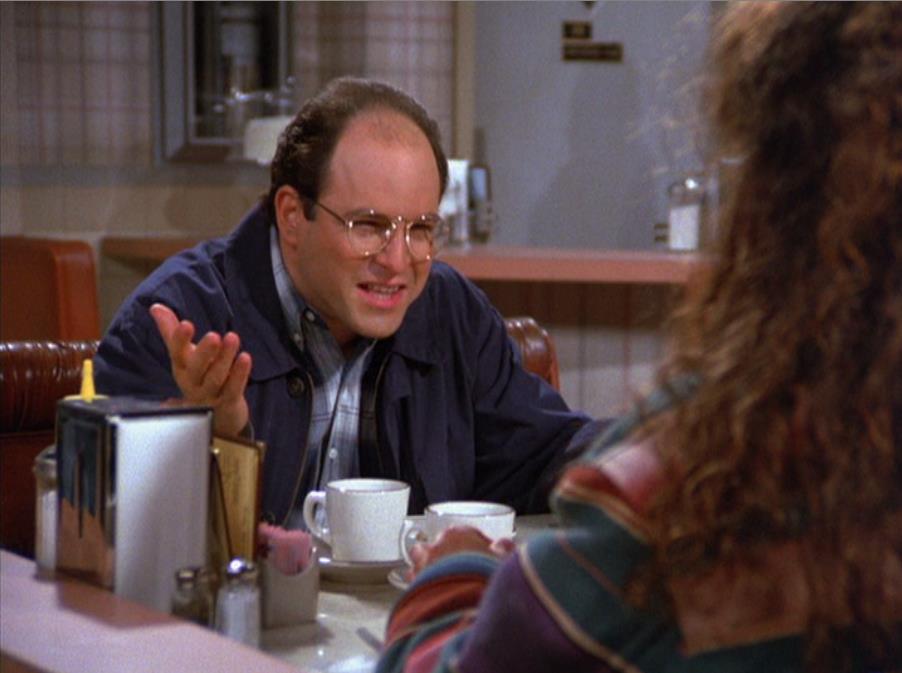 Jerry is investigated by the library for a book he checked out in 1971 and never returned. Elaine fears for her career when her boss hates her recommendations, and Kramer strikes up a relationship with the librarian. Meanwhile, George believes that a homeless man is his old gym teacher, whom he got fired.

Mr. Bookman: Sure, we're too old to change the world, but what about that kid, sitting down, opening a book, right now, in a branch at the local library and finding drawings of pee-pees and wee-wees on the Cat in the Hat and the Five Chinese Brothers? Doesn't he deserve better?

Elaine: Lippman wants to see me. SEE ME! That can't be good.
Jerry: Maybe you're getting a raise.
Elaine: Maybe I'm getting a wedgie.

Elaine: (on boys giving wedgies, etc.) Boys are sick.
Jerry: What do girls do?
Elaine: We just tease someone 'til they develop an eating disorder!

George: So I said, "Mr. Hayman, It's me George Costanza, JFK, ... " He doesn't move. So I said uh, "Can't stand ya'", "Can't stand ya'" He turns and smiles, the little baked bean teeth. I get up to run away, but something was holding me back. It was Heyman. He had my underwear. There I was on the steps of the 42nd St. library ,a grown man, getting a wedgie.
Elaine: At least it wasn't atomic.
George: It was.
George: Listen, just because I got the guy fired doesn't mean I turned him into a bum - does it?

George: I don't understand lunch. I don't know anything about lunch.

Mr. Bookman: You'd better not screw up again, Seinfeld, because if you do, I'll be all over you like a pit-bull on a poodle.

Jerry: It reminds me of like this pathetic friend that everbody had when they were a little kid who would let you borrow any of his stuff if you would just be his friend. That's what the library is. A government funded pathetic friend.

Mr. Bookman: I don't judge a man by the length of his hair or the kind of music he listens to. Rock was never my bag. But you put on a pair of shoes when you walk into the New York Public Library, fella.

Kramer: The Dewey Decimal System... What a scam that was!

When Mr. Bookman asks for coffee, Jerry claims that he doesn't drink coffee and doesn't have any. However, in the pilot, Jerry was seen drinking coffee.

They say Heyman is fired for giving George a wedgie. In the 1st shot Heyman goes for the waistband but the next shot it was only the students and Heyman is standing back.

Early in the episode it is stated that Mr. Bookman has been on the job for 25 years. Later he says 1971 was his first year on the job which should place the episode in 1996.

This is Harris Shore's only appearance as Mr. Lippman. Richard Fancy assumes that role beginning in the "The Red Dot."

When Mr. Bookman pays a visit to Jerry, he picks up a book from the shelf and subsequently places it back. Keep your eye on that book as you will see it move to a different position on the shelf just a few moments later.

Actress Cynthia Szigeti was credited "as Sandy" instead of "as Sherry Becker".

Near the end, Heyman is shown saying, "Can't-stand-ya, can't-stand-ya!", but his lips are barely moving.