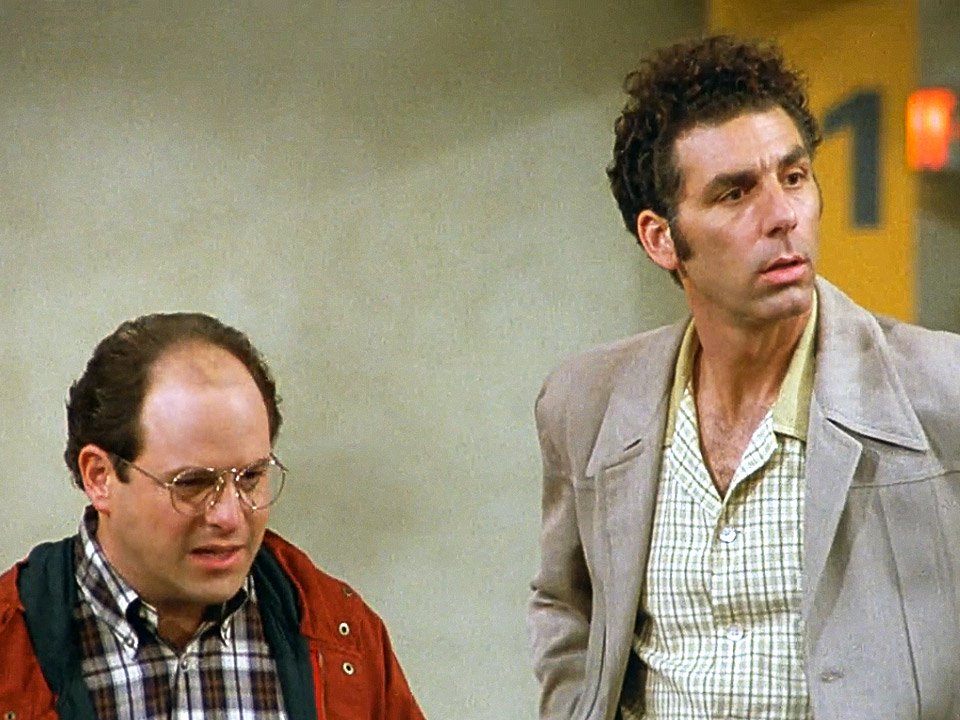 The gang experience a series of misadventures while trying to find Kramer's car in a mall parking garage.

Jerry: You know, I've been issued a public urination pass by the city because of my condition. Unfortunately, my little brother ran out of the house with it this morning. Him and his friends are probably peeing all over the place.

George: Fish. What do they do?
Elaine: What do you do?

(Kramer is carrying an air conditioner box)
Jerry: Will you let me help you with that?
Kramer: I'm gonna put it down behind that car.
Jerry: Worried somebody's gonna pee on it?

Jerry: The problem with the mall garage is that everything looks the same. They try to differeriate between levels. They put up different colors, different numbers, different letters. What they need to do is name the levels, like, "Your mother's a whore." You would remember that.

George: What's the difference? We'll all be dead eventually?
Kramer: Does that bother you?
George: Yeah, it bothers me. Doesn't it bother you?
Kramer: Not at all.
George: You see, now, that bothers me even more than dying bothers me, because it's people like you who live to be 120 because you're not bothered by it.

George: Unbelievable. I'm never gonna get outta here. Guy goes to pee, he never comes back. It's like a science-fiction story.

Kramer: Purple 23, remember that.
George: Yeah, that I'm supposed to remember. Where the car is, that's insignificant.

Jerry: Why do I always have the feeling everyone's doing something better than me on Saturday afternoon?
Elaine: This is what people do.
Jerry: No they don't. They're out on picnics, cooking burgers, making out on blankets. Not in some mall in Jersey helping their friends find the world's cheapest air conditioner.

Jerry: (to George) You get within fifteen feet of that woman, she'd have her finger on the mace button.

Jerry: There's too much urinary freedom in this society.

Jerry: I could get uromisitisis poisoning and die!

George: If I am not in front of my building at 6:15 when my parents get there, they are going to put me on an aggravation installment plan that will compound with interest for decades.

In this episode, longtime Seinfeld contributor Larry Charles makes a brief cameo appearance. He is the unresponsive man walking by with long hair and sunglasses.

The exterior shots of the parking garage are of the Newport Centre Mall in Jersey City, New Jersey.

The episode ends with Kramer's car not starting, but in the original script the ending was supposed to be Jerry, George, Elaine and Kramer getting in the car and then driving around in circles trying to find the exit to the mall. But when Michael Richards went to start the car it wouldn't start and they decided to end the show that way instead because it was funnier. If you watch the rest of the cast in the car you'll see them laughing when the car doesn't start because everyone was surprised by it.

Throughout the episode "The Parking Garage", Kramer is seen carrying around a box with a new air conditioner in it. Michael Richards insisted the prop department place an actual air conditioner in the box. Richards wanted to make his struggle with the box seem genuine.

When Kramer struggles to put the box with his air conditioner into the trunk, resulting in him simply slamming the box into the trunk hard, Michael Richards injured himself. He banged his lip on the box's corner, cutting it open. Thus, sending the other cast members into genuine laughter. Richards himself managed to stay in character, as he looked at Julia Louis-Dreyfus and said "I really hurt myself, Elaine."

This is the first episode to be filmed without a studio audience. The set for Jerry's apartment and the studio audience seating had to be removed to make room for the parking garage set. Mirrors and different camera angles were used to create the illusion of a multi-level garage.

The studio audience for "The Tape" episode was used as the laugh track for this episode. After the taping of "The Tape", the audience watched the recorded episode of "The Parking Garage" and their laughter was recorded.

Kramer's unofficial catchphrase "Giddy Up" is first used in this episode.

This episode received an Emmy nomination for Outstanding Writing in a Comedy Series.

Kramer put the air conditioner down in Purple 23 and Jerry peed in Yellow 14.

When Kramer is hiding the air conditioner in front of the car, you can see the wall wobble when he bangs against it which shows that it's a set.

When Jerry and George are walking down the stairway and talking about Red China, they are walking side by side. In the next shot after they round the corner, they switched places.