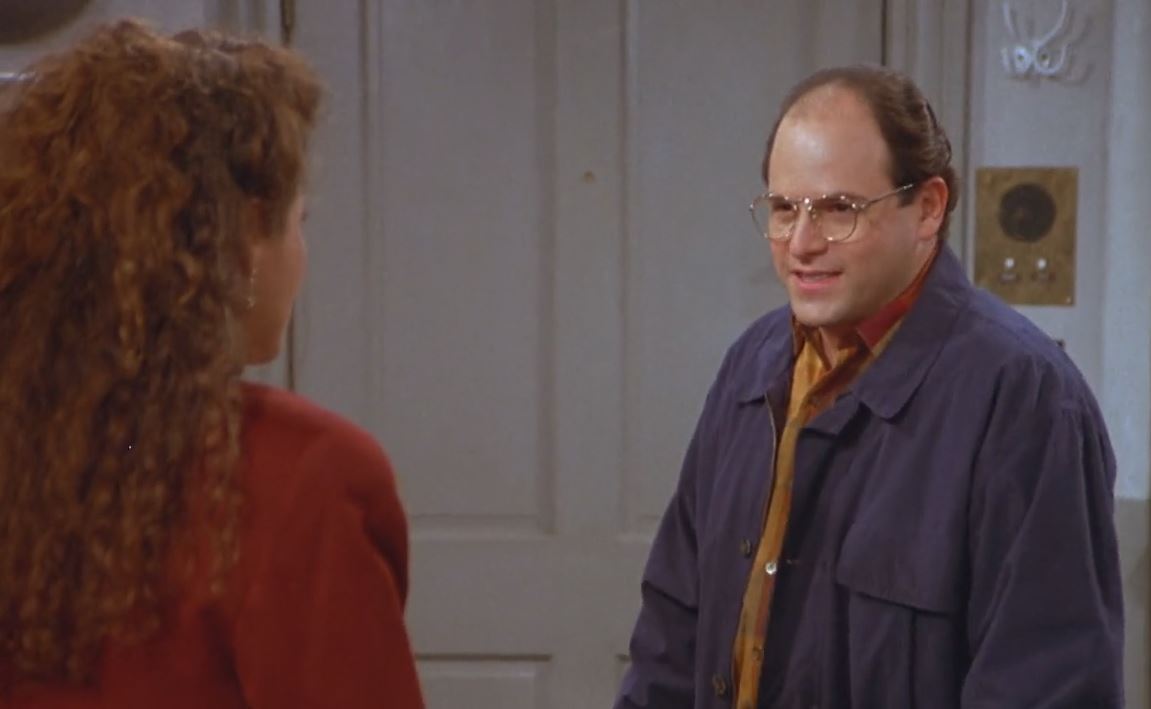 You should've seen her face. It was the exact same look my father gave me when I told him I wanted to be a ventriloquist.

Jerry tries helping the owner of a small restaurant attract customers by giving him a suggestion. George must take an IQ test for his latest girlfriend, so Elaine helps him in "a caper" where she takes the test for him. Kramer tries to keep his mother's ex-boyfriend's jacket, because it helps him meet women; however the ex-boyfriend comes looking for it.

Babu: Where are people? You see people? Show me people! There are no people!

George: Oh, hello, professor.
Elaine: George, I cannot believe...
George: Please...
Elaine: No, there has got be a mistake.
George: You should've seen her face. It was the exact same look my father gave me when I told him I wanted to be a ventriloquist.
Jerry: But an 85?

George: She wants me to take an IQ test.
Jerry: 'Cause you're stupid enough to wear the cologne.

Jerry: You know, I could probably shoot him from here. I'd be doing us both a favor.

Kramer: Hey, do me a favor...Some guy comes in looking for me, tell him you don't know where I am.
Jerry: Of course, I always do.
Kramer: No, no it's that guy. He's really been bugging me about the jacket.
Elaine: Just give it back to him.
Kramer: Oh, he'll have to kill me.

Jerry: Go ahead, you're taking the IQ test.
George: Yeah, and she's gonna find out I'm a moron. You know, people think I'm smart, but I'm not smart.
Jerry: Who thinks you're smart?

Elaine: Why do you keep watching?
Jerry: I don't know, I'm obsessed with it. It's like a spider in the toilet struggling for survival. And even though you know he's not gonna make it you, you kinda root for him for a second.
Elaine: Then you flush!
Jerry: Well, it's a spider.

Kramer: I meet a lot of women in this jacket. They're attracted to it.

Elaine: (to George) Listen, there were too many distractions there. Babu...whatever his name was, and Kramer, I couldn't concentrate.
Jerry: (swaying around mockingly) It was a maaaad-house!
Elaine: Jerry, it was!

Kramer: This guy leaves this jacket at my mother's house for two years. Now, she hasn't seen him since and now he says he wants the jacket back.
Jerry: So?
Kramer: Well, I'm not giving it back.

Jerry: (swaying around) It was a maaaad-house...

Jerry: (with his sweater over his nose) Bazooka Joe.

Monica: I need to get something.
George: Monica, I'm really focused here, this stuff's a killer.
Monica: George!
George: Wish I could.

George: (explaining how he got food on his IQ test) I had a sandwich in my pocket.

Jerry: I am special, my mother was right.

Babu: Our specials are tacos, moussaka, and franks and beans.
Jerry: Well, what do you recommend my good fellow?
Babu: Oh, the turkey.

The Latin phrase "Casus belli" said by Elaine and repeated by Jerry can be translated as "risk of war" or "occasion for war" in English.

This is the first episode to have applause by the studio audience as Kramer entered. It happened when Kramer entered the Dream Cafe.

The Babu Bhatt character was originally named as "Vong Sim" in early drafts of the script.

Babu is from Pakistan, but the actor who played him, Brian George is from Israel.

In the first scene inside the Dream Cafe, Elaine orders Rigatoni, but when she moves tables to work on the test, you see her food is quite clearly a plate of Franks and Beans, not pasta at all. This is what Babu offered Jerry at the start, and what he spills on the test later in the episode.

Notice from episode to episode in Season 3 the baseball hat on the basketball hoop in Jerry's apartment seems to switch from between being a Mets hat to a Yankees hat.

When Jerry is in the cafe for the second time, he thinks to himself, "I am great..." while striking the same pose as the bust of Julius Caesar that is on the wall behind him.

George claims he got 1409 on the SAT, which is impossible as the scores only go in increments of 10.