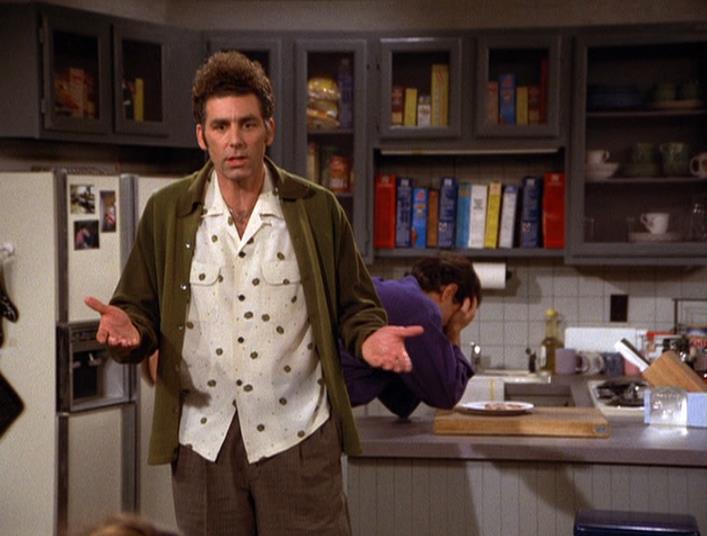 You're as pretty as any of them, you just need a nose job.

Jerry's brain and penis play chess against one another to decide whether he should keep dating a vacuous model with whom the "sex is great" but not anything else. George is dating a woman with a big nose, Kramer tells her it like it is and she gets a nose job; however, there is a complication. Kramer gets Elaine to help him retrieve the jacket.

George: I'm going straight to hell, no two ways about it.

George: You won't think I'm a bad person?
Jerry: Too late for that.

Landlord: (on Babs) The woman used to walk around here half naked, sucking Colt .45 from a can. Her big fat stomach hanging out, orthopedic hose up to her knees, screaming down the hall, 'Come back to bed, Albert, you big hairy ape, and bring back that box of Danish!'

Kramer: You're as pretty as those girls, you just need a nose job!

Kramer: You got butchered.

Jerry: It's like my brain is facing my penis in a chess game. And I'm letting him win.
George: You're not letting him win. He wins till you're forty.
Jerry: Then what?
George: He still wins but it's not a blowout.

Jerry: She is the most despicable woman I have ever met in my life. I have never been so repulsed by someone mentally and so attracted to them physically at the same time.

George: It's like going to the bathroom in front of a whole bunch of people and not caring.
Jerry: It's not like that at all!

This episode features one of the first scenes which Julia Louis-Dreyfus had the hardest time getting through without laughing. She continually burst into giggles at the sight of Michael Richards as Kramer stuffing his pipe with tobacco, and he was displeased with her inability to get a grip, insisting that she was throwing off his concentration.

In the scenes where Jerry's brain and penis play a metaphorical game of chess, the penis is represented by Seinfeld wearing a painted combat helmet (of the style worn by the US military from the 1940s to the '80s).

In this episode George mentions he is from Long Island, whereas in other episodes he states that he grew up in Queens. Yes, technically Queens is located on the western end of Long Island, but a New Yorker would never refer to Queens as "long Island".

When George hands Audrey the mirror, Elaine can be seen talking to Kramer, but her voice is muted.