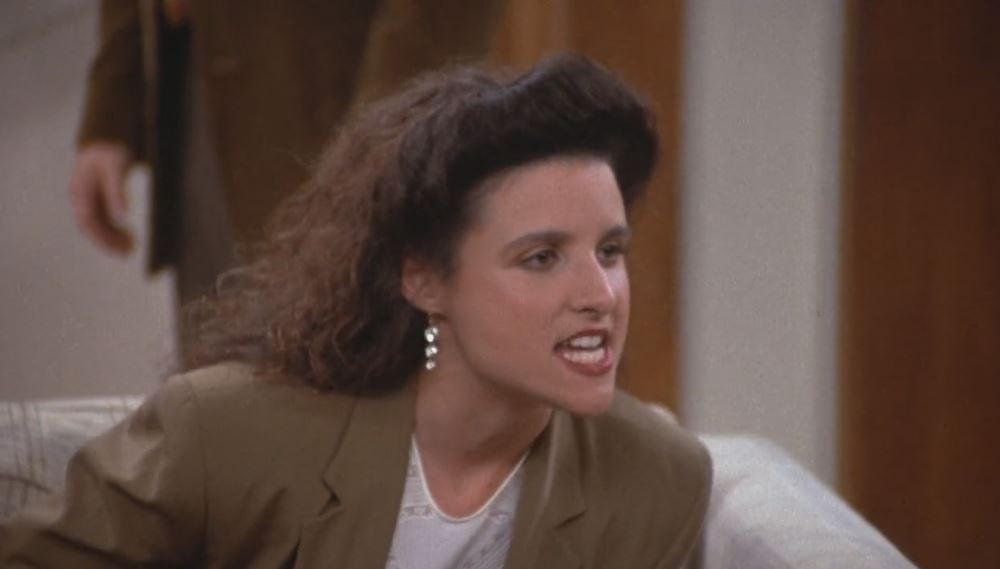 Maybe the dingo ate your baby.

Jerry & Elaine go to a party with George, while there they send signals to each other to get out of bad party conversations. Afterward, George abandons them there, when he leaves with a co-worker he has a chance with. Jerry & Elaine keeping the hosts up real late, while waiting for Kramer to come and pick them up. The host later takes Jerry up on his offer to drop by when he is in the city, just as Jerry is leaving. He stays in Jerry's apartment for the evening and parties with Kramer and a lady of the evening. Later George pays the price for his romance in the workplace (he must quit) and he tries to shoplift at the drug store where he says they still owe him ten dollars.

Woman: I have lost my fiance, the poor baby.
Elaine: Maybe the dingo ate your baby.

George: Every day is a date.
Jerry: That's one of Dante's nine stages of hell, isn't it?

Jerry: Listen, George is going home with this Ava from his office.
Elaine: Really? Huh. What a world. So we can go now?
Jerry: Uh, no, he's taking the car.
Elaine: Well, what are we gonna do for a ride?
Jerry: I don't know.
Elaine: You don't know?
Jerry: Maybe Kramer can come pick us up.
Elaine: Oh great, oh, this is great. How could you let him take the car?
Jerry: There's nothing I could do, it's part of the code!

George: I long for you.

Party Guest: So what do you do?
Jerry: I'm a comedian.
Party Guest: Are you? Let me ask you something. Where do you get your material?
Jerry: I hear a voice.
Party Guest: What kind of voice?
Jerry: A man's voice, but he speaks in German so I have to get a translator.
Party Guest: How come you keep tapping your head?
Jerry: It's a nervous tic. I'm on L-Dopa.

Jerry: What could possess anyone to throw a party? I mean, to have a bunch of strangers treat your house like a hotel room.

Jerry: Now listen, let's keep an eye on each other tonight. In case one of us gets in a bad conversation, we should have a signal that you're in trouble so the other one can get us out of it.
Elaine: How old are you?

George: Every time I go to the bathroom I pass her desk. I have to plan little patter. I spend half my day writing. Then afterwards, I sit in my office and analyze how it went. If it was a good conversation, I don't go to the bathroom for the rest of the day.

George: You got aloe? I love aloe.

George: I can't believe what's happening here. She hasn't taken her hands off me all night. She was always friendly around the office, but that was it!
Jerry: How do you account for this?
George: Maybe a safe fell on her head.

George: The last time a woman said that [make love to me] to me I wound up apologizing to her.

This episode was originally produced for the second season. However, Larry David did not like it and postponed the airdate. The original airing of the episode included an introductory segment with Jerry explaining that there would be continuity errors.

On the DVD box set, you may find this episode on Season 2

Elaine tells someone at the party that she is reading manuscripts for Pendant Publishing. Jerry walks by and says "Pendant! Those bastards!". This is a reference to what Elaine's father said in "The Jacket" when Elaine told him she was working for Pendant. In another possible reference to that episode, Kramer tells Steve a story that involves a magician and someone almost getting hit by a car. Although we don't here the entire story it sounds suspiciously like when he and Elaine picked up his friend's doves.

At the party in Long Island, George's co-worker brags about having just sold 129 West 81st Street. This is the same address Jerry uses in the show, and the building used for exterior shots of his apartment.

Jerry says he's 36 years old, and we assume that George is the same age. This is only episode where any of the main characters age is mentioned directly.

When Jerry is writing something on a notepad at the party, he does it with his left hand.

When Elaine says, "Maybe the Dingo ate your baby" she is making a reference to a line by Meryl Streep in the 1988 film "A Cry In The Dark".

At the party, the guy going on and on about peanuts to Elaine says that the cashew is a legume. It is not. The peanut is (grows in a pod), but the cashew is the seed of the cashew tree.

When Elaine and Jerry are waiting for Kramer to pick them up, Jerry picks up a book on the civil war. In the next shot, it's on the coffee table again and in the next shot it's in his lap.