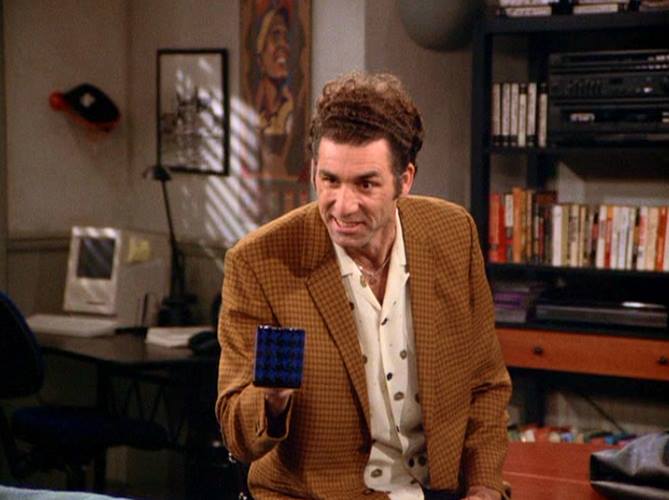 Imagine, you can walk around drunk all day! That's Hennigan's: No-smell, no-tell, scotch!

Jerry is the unwitting cause of Elaine's boyfriend falling off the wagon. Elaine gets George a job, so he buys her a gift, an $85 cashmere sweater. The sweater has a little red dot on it; hence the price. Elaine gives it back, then George gives it to the cleaning woman, to keep her quiet about them having sex on his desk. George gets fired.

Jerry: You want an overview? I see a very cheap man holding a damaged sweater, trying to get away with something. That's my overview.

Mr. Lippman: I'm going to get right to the point. It has come to my attention that you and the cleaning woman have engaged in sexual intercourse on the desk in your office. Is that correct?
George: Who said that?
Mr. Lippman: She did.
George: Was that wrong? Should I have not done that? I tell you I gotta plead ignorance on this thing because if anyone had said anything to me at all when I first started here that that sort of thing was frowned upon, you know, cause I've worked in a lot of offices and I tell you people do that all the time.
Mr. Lippman: You're fired.

Jerry: I never feel comfortable in the woman's department. I feel like I'm a little too close to trying on a dress.

George: ...next thing I knew, she was mopping up the floor with me.
Jerry: How was it?
George: The sex was good, but I threw up from the Hennigan's.
Jerry: Good thing the cleaning woman was there.

Kramer: Say you got a big job interview, and you're a little nervous. Well throw back a couple shots of Hennigan's and you'll be as loose as a goose and ready to roll in no time. And because it's odorless, why, it will be our little secret. H-E-double N-I...

This is the only episode where, during his act, Jerry interacts with the audience, as he stops to speak to Dick.

In the credits, "Mr. Lippman" is listed as "Mr. Breckman", although the character's name is not mentioned in the episode. In future episodes he would be know ad Mr. Lippman.

Apparently, there isn't actually a red dot on the sweater. The cast just pretended to see a red dot. (That's why they're called actors.)

This episode marks the first appearance by Richard Fancy as Mr. Lippman. He was in 11 episodes.