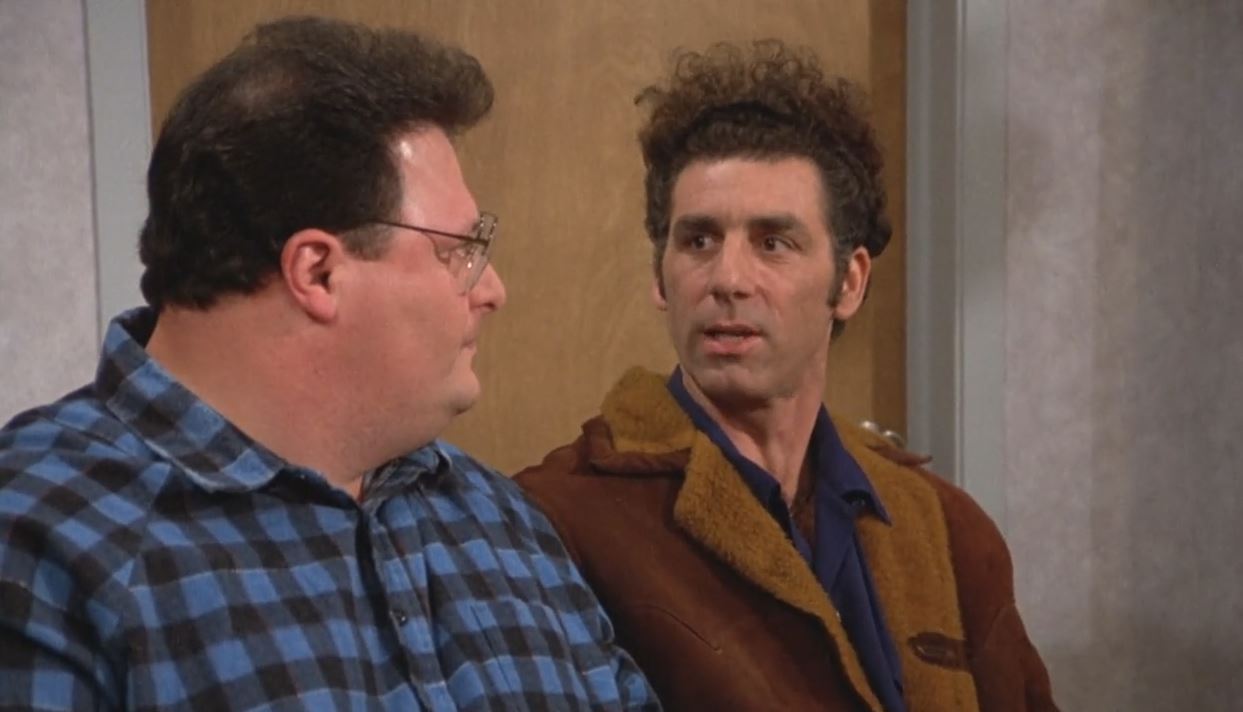 The carpet sweeper is the biggest scam perpetrated on the American public since one-hour martinizing.

Elaine needs to fast before an x-ray, so she tries stuffing herself three days before the test. After his neighbor Martin tries suicide, Jerry is hit on by his girlfriend, Gina, while at the hospital. A psychic warns George to cancel his vacation to the Cayman Islands, but never can tell George why. Jerry becomes worried when Newman (a friend of Martins) sees him with Gina. Elaine starts hallucinating from hunger. Everything hinges on a Drake's coffee cake.

Kramer: Did you hear about Martin?
Jerry: Yeah, I heard.
Kramer: I can't believe he's in a coma. He's got my vacuum cleaner. You know I loaned it to him. He never returned it. The carpets are filthy. What am I going to do?

Gina: A man is lying here unconscious and you're afraid of him? What kind of a man are you?
Jerry: A man who respects a good coma.

Elaine: I wonder what Gandhi ate before he fasted.
Jerry: I heard he used to polish off a box of Triscuits.
Elaine: Really?
Jerry: Oh yeah, Gandhi loved Triscuits.

Gina: Come on.
Jerry: In my pajamas? I better get my robe.
Gina: We don't have enough time.
Jerry: It'll take two seconds.
Gina: There is no time.
Jerry: We don't have two seconds?
Gina: All right. Go ahead.
Jerry: Nah, forget it.
Gina: No, go ahead.
Jerry: Nah. I'll just wear the pajamas.
Gina: Will you just get it.
Jerry: Are you sure?
Gina: Forget it. Come on.
Jerry: Nah, I'll go get the robe.

Jerry: Hey, do me a favour will ya? Throw out my garbage for me.
George: Yeah, right.
Jerry: Come on, it's just down the hall.
George: Give me two bucks. I'll do it for two bucks.
Jerry: I'll give you 50 cents.
George: There's no way I touch that bag for less than two dollars.

Jerry: Let me ask you a question. If you named a kid Rasputin do you think that would have a negative effect on his life?
Elaine: Nah.

Elaine: It's really bad for the fetus. Do you know that.
George: Elaine, she's a psychic. She knows how the kid's going to be.

Jerry: Let me ask you something. How long do you have to wait for a guy to come out of a coma, before you can ask his ex-girlfriend out?
Kramer: Gina? Why wait? Why not just call Dr. Kevorkian?

Elaine: Hey, have you ever fasted?
Jerry: Well, once I didn't have dinner until, like nine o'clock. That was pretty rough.

George: A plane crash? A heart attack? Lupus?! Is it lupus?!

Kramer: What kind of a man are you? The guy is unconscious in a coma and you don't have the guts to kiss his girlfriend?
Jerry: I didn't know what the coma etiquette was.

Elaine: And there it was, mountains of duck. And not fatty duck either, but juicy tender breasts of duck.

Elaine: How do we know that dog food is any good? Who tastes it?
Jerry: She's really hungry.

George: Hey, I'm all set. I got the ticket. I'm going to the Cayman Islands this Friday.
Jerry: I don't get you. Who goes on vacation without a job? What, do you need a break from getting up at 11:00?

Jerry: It's not like a Sonny Von Bulow coma.

Jerry: I can't commit to a woman. I'm not committing to an airline.

Jerry: You know I don't get that whole suicide machine. There's no tall buildings where these people live? They can't wrap their lips around a revolver like a normal person?

Newman: Is that Drake's Coffee Cake?

Gina: Come, you walk me to a cab.
Jerry: Well, uh, I uh, I don't want you to get upset or anything but uh, with Martin and all, well maybe it's not such a good idea for us to be seen together in the building, because, you know, he had a lot of friends here.
Gina: You're still afraid. You are not a man.
Jerry: Well then what are all those ties and sport jackets doing in my closet?

Gina: I do not like your toothbrush. There are no bristles.
Jerry: You can say what you want about me but I'll be damned if I'm going to stand here while you insult my toothbrush.

Jerry: The thing I don't understand about the suicide person is the people who try and commit suicide for some reason they don't die and that's it. They stop trying. Why? Why don't they just keep trying? What has changed? Is their life any better now? No. In fact it's worse because now they've found out one more thing you stink at. Okay, that's why these people don't succeed in life to begin with. Because they give up too easy. I saw, pills don't work, try a rope. Car won't start in the garage, get a tune up. You know what I mean? There's nothing more rewarding than reaching a goal you have set for yourself.

Kramer: The carpet sweeper is the biggest scam perpetrated on the American public since one-hour martinizing.

In this episode, Jerry states that George's parents are bald. Later in the series, we see that they really aren't bald.

This is the latter of two episodes where George Costanza mentions having a brother, although his brother is never seen, and never mentioned again.

Newman's first line in the series is, "I can't eat fruit. Fruit makes me incontinent." Of course we know that Newman's maintains an obsession with Mackinaw peaches in a later episode.

This episode marks the first time we see Jerry kiss a woman on screen.

This episode marks the first on-screen appearance of Newman, as played by Wayne Knight. It is also the first time Jerry utters the trademark greeting, "Hello, Newman."

Two versions of this episode were made: the Original Network version and the Revised Syndicated version. Both versions are included on the Season 3 DVD.

Jason Alexander's real mother makes a cameo in this episode sitting on a bench next to Elaine.

After Jerry leaves his garbage on Kramer's door and knocks, you can see the whole wall shake when he closes his apartment door.