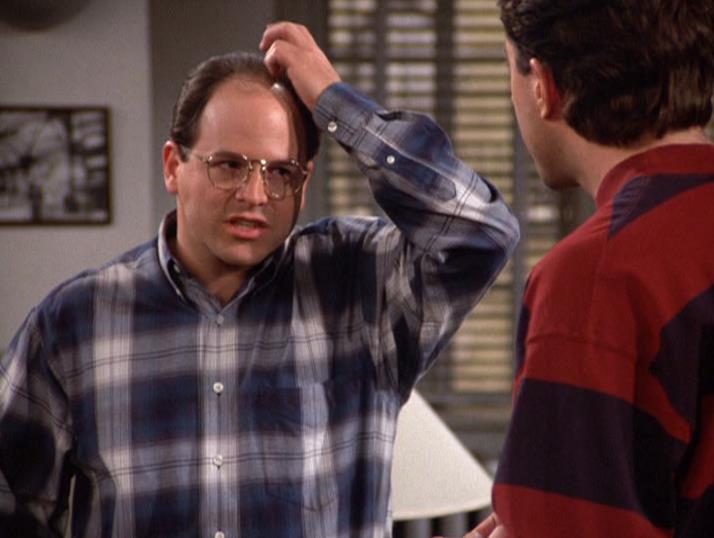 Is it flowing? I like flowing, cascading hair. Thick, lustrous hair is very important to me.

After selling each other on the idea, Jerry and Elaine sell George and Elaine's friend on a blind date, then they await the results. They promise to keep each other updated with "full disclosure," though that doesn't happen. There also may be a problem with a defective condom. "My boys can swim!"

Elaine: Cynthia thought we should nuke the rainforest, get rid of it in one sweep, just so we can eliminate it as a topic of conversation.

Cynthia: I mean the problem is that the good ones know they're good. And they know they're in such demand they're just not interested in confining themselves to one person.
Elaine: I hate the good ones.
Cynthia: Is Jerry one of the good ones?
Elaine: That's a good question. I think he thinks he is.

Cynthia: He was uncomfortable because it was our first time so he felt he would perform better if we did it in the kitchen. He said the kitchen is always the
most sociable room in the house. And he was serious.
Elaine: So, how was it?
Cynthia: How good could it be? My head was on a hot plate.

Kramer: (breaking up a fight between Jerry and George) The next one of you that opens up your mouth and says something, you're gonna have to deal with me!

Kramer: (breaking up Jerry and Elaine's fight) Can't you two see... that you're in LOVE with each other?

Elaine: Well, at least you're not bitter.
Cynthia: Who says I'm not bitter?
Elaine: Aren't you too young to be bitter?

Cynthia: What does he look like?
Elaine: Um, well, he's got a lot of character in his face. Um, he's short. Um, he's stocky.
Cynthia: Fat. Is that what you're saying, that he's fat?
Elaine: Powerful. He is so powerful, he can lift a hundred pounds right up over his head. And um, what else. What else. Oh, right. Um, well, he's kind of, just kind of losing his hair.
Cynthia: He's bald?
Elaine: No! No, no, no, he's not bald. He's balding.
Cynthia: So he will be bald.
Elaine: Yup.

George: It's hard enough to meet a woman you dislike, much less like.

Jerry: Well let me tell you something about George. He is fast. He can run like the wind. And he's strong. I've seen him lift a hundred pounds over his head without even knowing it. And you wouldn't know it to look at him, but George can bait a hook.

George: I don't want hope. Hope is killing me. My dream is to become hopeless. When you're hopeless you don't care. And when you don't care, that indifference makes you attractive.
Jerry: So, hopelessness is the key?
George: It's my only hope.

Elaine Pope and Larry Charles won an Emmy for writing this episode.

Elaine says that George was fired for trying poison his boss is a reference to the episode "The Revenge".

Jerry and George debate whether "timbre" is pronounced tim-ber or tam-ber. In reality, both are equally correct.

When George says, "Oh, fabulous," at the dinner table, his mouth doesn't move.

When Cynthia talks to Elaine on the phone, the way her blanket is folded changes between shots.

When George is ranting about why he won't go out with Cynthia, Jerry and George both have belts on. However, Jerry's belt later disappears.