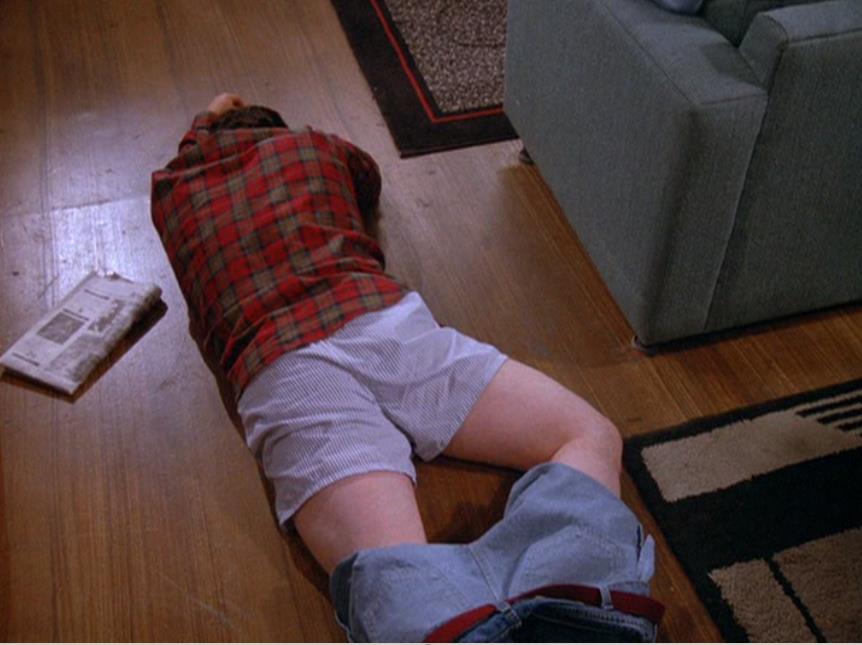 And you want to be my latex salesman.

Jerry meets Keith Hernandez and wants to make a good impression. Meanwhile, George is out of time on his unemployment and he works harder than ever on his scheme to get a 13 week extension. He tells the unemployment office he was really close on Vandelay Industries, a company that makes latex products and whose main office is Jerry's apartment. Kramer and Newman hate Hernandez back to a time when they were allegedly spit on by him; however, Jerry supports the "second-spitter theory." Keith asks Jerry about Elaine's status. Keith makes a date with her and breaks a date with Jerry.

Jerry: The sad thing is, we'd never know the truth.

Jerry: I'm not drivin' him to the airport!

Jerry: I'm going to hire you as my latex salesman?
George: Right.
Jerry: (chuckling) I don't think so.

Keith Hernandez: Who's this chucker?

George: I am not a chucker! I Never have chucked! Never will chuck! No chuck! Kramer, am I a chucker?
Kramer: Oh, you're a chucker, buddy.

Jerry: I'm Vandelay Industries?
George: Right.
Jerry: And what is that?
George: You're in latex.
Jerry: Latex? And what do I do with latex?
George: You manufacture it.

(Jerry comes from the bedroom and sees George lying on the floor in his underwear)
Jerry: (in a condescending tone) And you want to be my latex salesman?

Kramer: Hey you know this is the first time we've ever seen each other naked?
Jerry: Believe me, I didn't see anything.
Kramer: Oh, you didn't sneak a peek?
Jerry: No, did you?
Kramer: Yeah, I snuck a peek.
Jerry: Why?
Kramer: Why not? Hey, what about you George?
George: Yeah, I ... I snuck a peek. But it was so fast I didn't see anything. It was just a blur.
Jerry: I made a conscious effort not to look. There's certain information I just don't want to have.

Jerry: Vandelay Industries. Kel Varnsen speaking. How may I help you?

Newman: June 14, 1987.... Mets Phillies. We're enjoying a beautiful afternoon in the right field stands when a crucial Hernandez error to a five run Phillies ninth. Cost the Mets the game.
Kramer: Our day was ruined. There was a lot of people, you know, they were waiting by the player's parking lot. Now we're coming down the ramp... Newman was in front of me. Keith was coming toward us, as he passes Newman turns and says, "Nice game pretty boy." Keith continued past us up the ramp.
Newman: A second later, something happened that changed us in a deep and profound way front that day forward.
Elaine: What was it?
Kramer: He spit on us.... and I screamed out, "I'm hit!"
Newman: Then I turned and the spit ricochet of him and it hit me.

Jerry: That is one magic loogey!

Kramer: Hernandez spit at us.

Jerry's line, "And you want to be my latex salesman," was ad-libbed.

This originally aired as an hour-long episode. The script timed out at forty-five minutes but Seinfeld and Larry David did not want to cut it any of it. Therefore, they asked NBC to do a one-hour episode.

This is one of the few episode's to show Monk's diner starting with a camera pan from across the street before the diner is in frame. It also shows the street, 112th Street, and the real name of the restaurant, Tom's restaurant.

This is the only episode to feature the episode title in the opening credits. It appears after Jerry's opening monologue.

Jerry's alias Kel Varnsen is used here for the first time. He'll use it again later in "The Puerto Rican Day". Here he uses when he answers the phone on George's behalf. According to the notes on the DVD release, Jerry's made-up name is "Kel", not "Kal", and it is a Superman reference.

While George is talking to Mrs. Sokol at the unemployment office, he does an impression of Jose Jimenez. Jose Jimenez was a fictional character that comedian Bill Dana created on The Steve Allen Show in 1959. The character was popular in the 1960s, but Dana eventually stopped performing the character after people found the impersonation offensive.

When Kramer comes in Jerry's apartment to ask him what he's doing Friday night, we see him swing the door to shut it, and we actually hear it close off-screen. Yet, when we cut back to the door it is still wide-open.

When George runs out of the bathroom to tell Kramer to say "Vandelay Industries," he falls and drops his paper to the right of where he lies. Then, in the shot from Jerry's view, the paper has somehow moved to the other side.

When George is being interviewed about his benefits, the camera's point of view alternates between the Mrs. Sokol 's side of the desk and George's. From her side there are four yellow pencils visible and from George's side we see only three, and she is holding the fourth one.