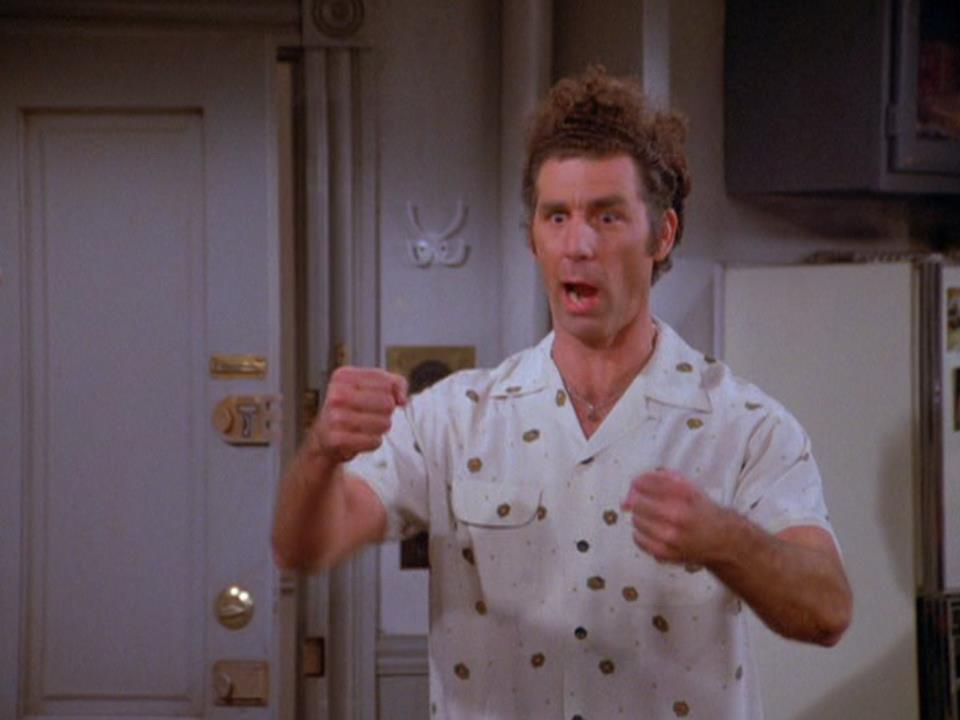 I mean what are you going to do? You're going to start driving him to the airport?

George tries two more approaches with the unemployment officer. Kramer gets Jerry to accompany him to see a former neighbors' new baby, "you got to see the baby." Though he's gone out with Keith once, does that mean he must help him move. Elaine and Keith are hitting it off until he pulls out a cigarette. George wants to sleep with a really tall woman. Keith supports the "second spitter theory." Jerry and Elaine both breakup with Keith and George might get his wish.

Newman: Wow, it was McDowell.
Jerry: But why? Why McDowell?
Kramer: Well, maybe because we were sitting in the right field stands cursing at him in the bullpen all game.
Newman: He must have caught a glimpse of us when I poured that beer on his head.

Jerry: Hello? Oh, hi Elaine. What's going on? No, he just left. You broke up with him? Me too!

Jerry: So I guess it's fair to say you've set different goals for yourself than say, Thomas Edison, Magellan, these types of people.
George: Magellan? You like Magellan?
Jerry: Oh, yeah. My favorite explorer. Around the world. Come on. Who do you like?
George: I like DeSoto.
Jerry: DeSoto? What did he do?
George: Discovered the Mississippi.
Jerry: Oh, like they wouldn't have found that anyway.

Keith: Elaine, you don't know the first thing about first base.
Elaine: Ha, ha. Well, I know something about getting to first base. And I know you'll never be there.
Keith: The way I figure it I've already been there, and I plan on rounding second tonight at around eleven o'clock.
Elaine: Well, uh, I'd watch the third base coach if I were you 'cause I don't think he's waving you in.

Carrie: Thank you for a wonderful time, George.
George: Glad you enjoyed it.
Carrie: I haven't had a Big Mac in a long time.

Jerry/Elaine: (mimicking their friend) You gotta see the baby!

Carol: (on her baby) So, who do you think she looks like?
Kramer: Lyndon Johnson.

Carrie: It's over buddy. Done. Finished. So long. Good bye. Adios. Sayonara.
George: Why?
Carrie: I've been thinkin' about it. You got no job. You got no prospects. You're like Biff Loman.
George: I went to the hardware store interview.
Carrie: You think I'm going to spend my life with somebody because he can get me a deal on a box of nails?

Jerry: That's what death is, really: it's the last big move. The hearse is like the van, the pallbearers are your close friends, the only ones you can ask to help you in a move like this, and the casket is that one perfect box you've been looking for your entire life. The only problem is, once you find it, you're in it.

Elaine: I love Cajun cooking.
Keith: Really, you know my mom's one quarter Cajun.
Elaine: Uh, my father's half drunk.

Newman claims the spitting incident occurred on June 14, 1987, in a game between the Mets and Phillies. In reality, on June 14, the Mets actually defeated the Pittsburgh Pirates 7-3 in Pittsburgh, while the Phillies won 11-6 over the Expos in Montreal.

In the original filmed ending, George thanks the tall woman for finding his wallet, and then shows her to the door.

According to Keith Hernandez, Darryl Strawberry was originally supposed to play the "Second Spitter", but due to Strawberry's then-recent drug problems, he was replaced.

This is the first episode where the audience applauds during Michael Richards (Kramer)'s first appearance.

For his performance in this hour long episode Jerry Seinfeld received a 1992 Emmy nomination for Outstanding Lead Actor in a Comedy Series.

When Jerry says, "You're like going out with C. Everett Koop" he is referring to the former U.S. Surgeon General who was very much against smoking.

Near the end, when George bursts into Jerry's apartment asking for Keith, Jerry almost breaks into laughter as he says "He just left."