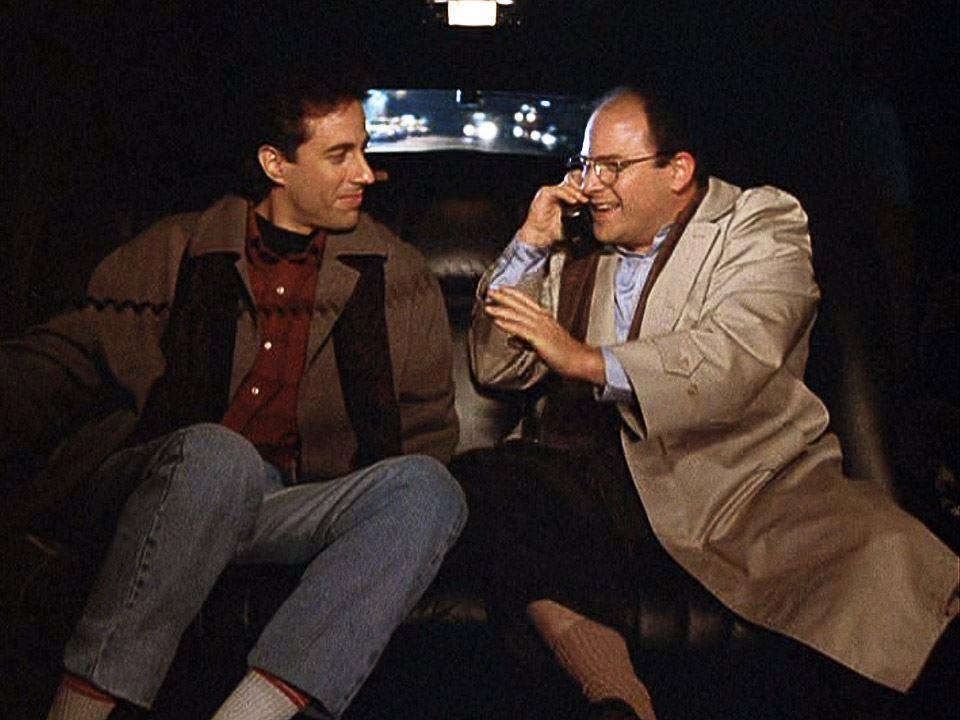 On a whim, Jerry and George take a limo from a passenger that Jerry knows never made it on the plane. While taking the limo they call Elaine & Kramer to join them for an event at Madison Square Garden, but it isn't the type of event they were hoping for.

(George is giddy with excitement as he and Jerry are sitting in the back of O'Brien's limo)
George: This is incredible! This is one of the greatest things I've ever done in my life! I'm gonna call my mother.
Jerry: What for?
George: I dunno, I'm in a limo.

Kramer: (points to Jerry) O'Brien, long time no see. (points to George) How's tricks, Murphy?
Tim: Why did you call him O'Brien and him Murphy?
Jerry: No, he was talking to me. He's cross-eyed.
Elaine: It could be very confusing.

Eva: What was that you said about the myth of the Holocaust?

George: (reading the speech he's been given) ". . . and so the Jews, through their Zionist occupied governments, use the black man to import drugs into our underprivileged, white, minority communities."
Jerry: You're not going to open with that, are you?

George: (on the phone) Yeah, hello, police? Uh, yeah, listen, uh, we're in the back of a limo in Queens-
(Tim re-enters the limo)
George Uh...Astroturf? You know who's responsible for that, don't you?! The Jews!(hangs up the phone) Ah, the Jews hate grass. They always have, they always will.
Tim: We'll be ready in a minute.
George: Would you excuse us for a minute, Tim boy, we're, uh, kind of in the middle of something.
Tim: With all due respect, Mr. O'Brien, we're just about to leave.
(George moves and sits down next to Tim)
George: Tim, who's the head of the Aryan Union, you or me?
Tim: You are.
George: And who is responsible for making hatemongering and fascism popular again?
Tim: You are.
George: Okay? I think you forgot something.
Tim: I'm sorry.
George: Good. Now, get out.
(Tim leaves)

Kramer: There's always been something very strange about Jerry. Always so clean and organized.

Jerry: I'll tell you one thing, this chauffeur's gonna be waiting a while. O'Brien's not showing up.
George: How do you know?
Jerry: He was in Chicago. Flight was overbooked; they wouldn't let him on the plane. He kept screaming how he had to get to Madison Square Garden.
George: We should take his limo.
Jerry: Yeah, right.
(Jerry begins to walk away, but George suddenly stops him)
George: Wait a second. Think about it. He's not showing up. Wait till you see the line for cabs, it's, like, 45 minutes long. You said he's in Chicago.
Jerry: He's definitely in Chicago.
George: Well, the guy's just standing there.
(Jerry looks at the chauffeur, who checks his watch)
Jerry: How would we do it?
George: We just go up to him and say, "We're O'Brien."
Jerry: Maybe he knows O'Brien.
George: No, he doesn't know O'Brien, if he knew O'Brien, he wouldn't have a sign.

George: Look, let's just jump out of the car.
Jerry: We're going sixty miles an hour!
George: So, we jump and roll, you won't get hurt.
Jerry: What are you, Mannix?

George: I just got here. My car broke down on the Belt Parkway.
Jerry: Oh, I can't believe-- why don't you get rid of that piece of junk?
George: One mile from the exit, it starts shaking, really violently shaking, like it's having a nervous breakdown, then it completely stopped dead.
Jerry: So, you have no car?
George: No.
Jerry: So, what good are you?

The character "Eva" is named for Eva Braun, who was Adolf Hitler's girlfriend, and - ultimately - his wife, during World War II.

The Chicago Bulls actually played the New York Knicks at Madison Square Garden two weeks prior to the episode being broadcast.

Kramer's stand-in, who frequently appears as an extra on the show, actually has a line when he asks George, "Hey do you have the time?"

Actress Suzanne Snyder (Eva) comes back to the series as Audrey in "The Pie."

Jerry's apartment and the coffee shop are not featured in this episode.

Jerry quips "Nice looking Luger" after Eva selects a pistol from the case. The gun is actually a Walther P38.

In the airport scene Jerry's scarf is awkwardly draped over his shoulder, but in some cuts it is not. Also, his collar is tucked underneath his coat, but later it is magically straightened.