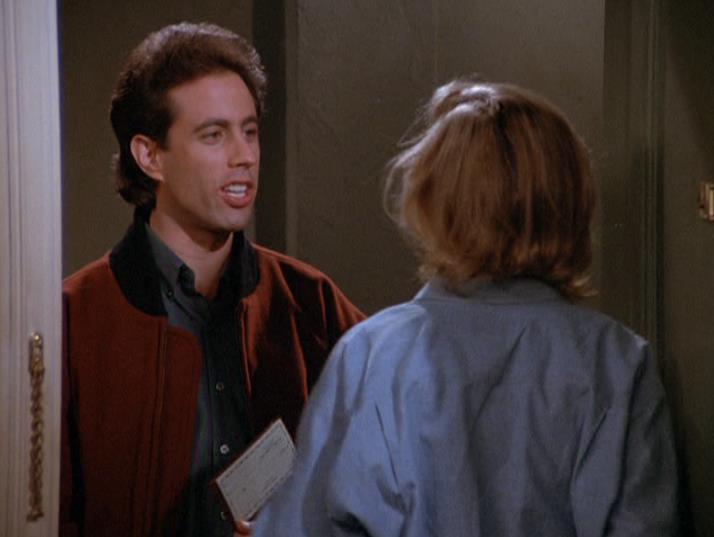 Jerry tracks down a hit-and-run driver, then he wants to date her, after dating her he finds out she hit another woman he's always wanted to date. George has an affair with Elaine's friend. Kramer has violent reactions to Mary Hart's voice.

Robin: *sneeze*
George: *pauses* God bless you.
Robin: Thank you.
George: (motions to husband) I wasn't going to say anything, but then I could see that he wasn't going to open his mouth. *snorts*

Kramer: (about hit-and-run drivers) You know they're mentally disturbed. They should be sent to Australia.

George: Oh, my God. I must be crazy. What have I done?
Robin: Oh no, what's wrong?
George: What's wrong? I'll tell you what's wrong. I just committed adultery!
Robin: You didn't commit adultery, I did.
George: Oh, yeah.
Robin: If I didn't do it with you, I would have done it with someone else.
George: Well, I wouldn't want you to do that. You know there's a lot of
losers out there.
Robin: Maybe even someone who didn't say 'God bless you'.

(Michael to Elaine over the phone)
Michael: He's finished! I'm going to sew his ass to his face! I'm going to twist his neck so hard his lips will be his eyebrows! I'm going to break his joints, and reattach them!

Elaine: Michael called me today, and he asked me where Robin was.
George: Yeah, okay.
Elaine: And I said I hadn't seen her.
George: What?!
Elaine: No, no George! You don't understand! She didn't tell me she was using me as an excuse! Okay?! But then I realized what was going on, and I said that she left a note. Um, but he didn't really buy that. And then, and then he did mention your name.
George: He mentioned my name?! What did he say?!
Elaine: He said he was going to sew your @$$ to your face.

George: I was brought up to say "God Bless you."
(Jerry sneezes)
George: Oh, shut up!

Jerry: If you want to make a person feel better after they sneeze, you shouldn't say 'God bless you.' You should say 'You're so good looking!

George: An affair? That's so adult. It's like martinis and stockings and William Holden.

Michael: You think you're so damn special because you say "God Bless You?"
George: No, I don't. I don't think I'm special. My mother always said I'm not special.

Kramer having seizures every time he hears Mary Hart's voice is based on an actual case reported in the New England Journal of Medicine. In 1991, a woman named Dianne Neale suffered epileptic seizures from hearing Hart's voice.

This is the only episode directed by one of the stars, Jason Alexander.

This episode gives us the first look at George's apartment. He has dinosaur sheets and a poster of "The Justice League of America" on the wall.

Entertainment Tonight refused to lend Seinfeld the theme for the show.

At the end of the scene where George and Jerry are sitting down on the couch, , Jerry flips the page of his magazine rather sharply. When he holds it up to read it, a piece of the page has actually been torn and can be seen hanging underneath.

When Jerry and Becky are talking at her apartment, the camera temporarily drops down and goes out of focus.