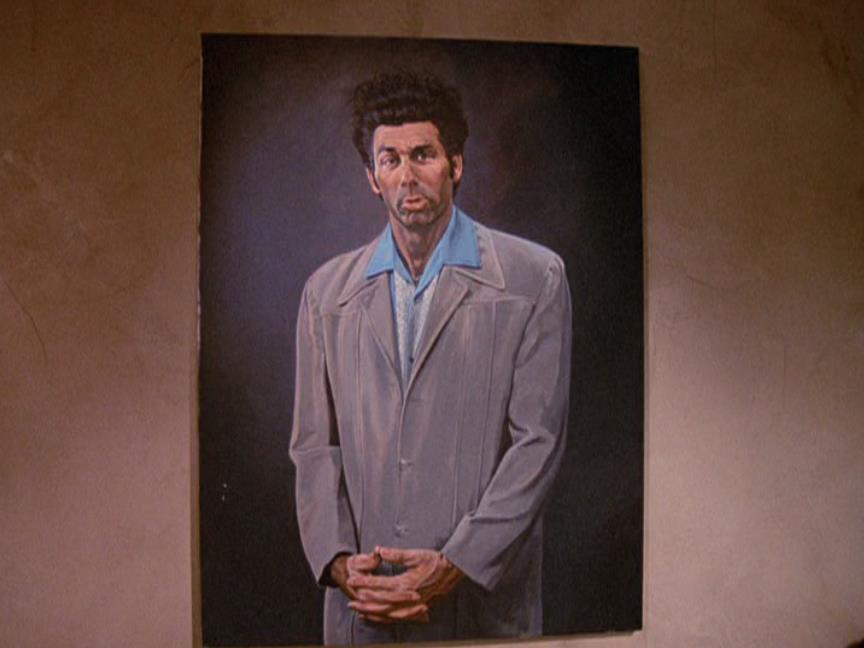 He is a loathsome, offensive brute. Yet I can't look away.

Kramer poses for a painting, that an elderly couple becomes just crazy about. George feels obligated to buy something when he accompanies Jerry to his new girlfriend's art studio. Elaine wears an Orioles baseball cap in the owner's box at Yankee Stadium and refuses to remove it. Jerry finds out his new girlfriend is a plagiarist after he hears the words she wrote in a letter, on television. Elaine gets a chance to return to Yankee Stadium.

Kramer: You're sure you don't want me to take my clothes off? 'Cause I'll do it.
Nina: No, that's the last thing in the world I want you to do.
Kramer: Well why don't you take your clothes off?

Jerry: I like the button fly. That is one place on my wardrobe I do not need sharp interlocking metal teeth. It's a mink trap down there.

Jerry: (picks up Nina's painting George bought) And by the way, can you get this thing outta my house?
George: Tell you what; I'll make a deal with you. I'll sell it to you right now for ten bucks.

(Jerry and Nina are watching TV)
Jerry: Don't go in there, you're gonna get shot.
(Gunshot on TV)
Jerry: I told you.

Jerry: I have to go meet Nina. You want to come to her loft, check out her paintings?
George: I don't get art.
Jerry: There's nothing to get.
George: No, it always has to be explained to me, and then I have to have someone explain the explanation.
Jerry: She does a lot of abstract stuff. In fact she's painting Kramer right now.

Mrs. Armstrong: (on The Kramer) I sense great vulnerability. A man-child crying out for love; an innocent orphan in the post-modern world.
Mr. Armstrong: I see a parasite. A sexually-depraved miscreant, who is seeking to gratify only his most basic and immediate urges.

The story of Elaine and the baseball cap was inspired by one of Larry David's real-life experiences. David asked executive producer Howard West if he knew anyone who could get him tickets for a Yankees-Angels game at Anaheim Stadium. West knew the accountant of Angels owner Gene Autry and was able to get David tickets to seats in Autry's box behind the dugout. David, a New York native, wore a Yankees cap to game. An Angels executive came down to the box and asked David to remove the cap because it might offend Mr. Autry. David could be seen wearing the hat on the front page of the Los Angeles Times sports section the following day.

The portrait of Kramer became a popular poster.

After being hit in the head by a baseball, Kramer refers to Elaine as "Carol" and to George as "Mike". This is a reference to Carol Leifer, who Elaine is partly based on, and Michael Costanza, a friend of Jerry Seinfeld's whose last name was used for George.

When Kramer sets the cardboard tray in his lap, the cup jumps from the tray to his hand between shots.

During the scenes at the ball game, the footage of the actual players on the field is of a noticeably lower quality than that of everything else going on.