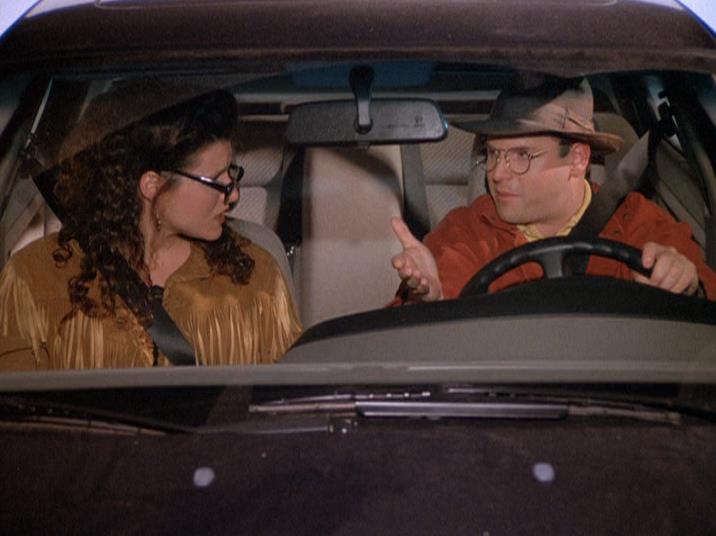 It's like going to a prostitute. Why should I pay, when if I apply myself, maybe I could get it for free?

Kramer tells Jerry about something his friend Mike said about Jerry being "a phony." After borrowing Jerry's car, Elaine comes up with a wild story, because the car is now making a strange clanking noise. George gets into a confrontation with Mike about a parking space in front of Jerry's apartment. Everyone one the street debates about parking etiquette.

George: Nobody drives like me. Nobody. I'm doing things in this car, you have no idea they're going on.

George: You don't understand. A garage, I can't even pull in there. It's like going to a prostitute. Why should I pay, when if I apply myself, maybe I could get it for free?

George: I really think it looks good.
Elaine: Ten bucks, how can you go wrong?
George: All bald people look good in hats.
Elaine: You should have lived in the '20s and '30s, you know men wore hats all the time then.
George: What a bald paradise that must have been.

Sid: (to George) Why don't you start taking the bus?

Jerry: What did you do to my car?!
George: I couldn't help it! Elaine moved the mirror. I got discombobulated.
Elaine: Oh, like you've ever been "bobulated."

Mike: Hey, pal. You're not getting that space. I mean, I'll sleep in my car if I have to.
George: I'll die out here.

Kramer: What's going on?
Mike: Hey, will you come on down? This guy's in my space!
George: IT'S MY SPACE!

Jerry: I'm not saying anything, I'm putting it in the vault, I'm locking the vault. It's a vault!

The parking space story was based on a real-life experience of writer Greg Daniels's father.

Once again, George mentions he has a brother, even though later in the series, it is established several times that he's an only child. This is the last time this occurs in the series, the first mention being in "The Suicide".

When aired in syndication, an entire scene is missing where Newman approaches George and asks if he can try on his new hat.

The street scenes were filmed outdoors with a live audience sitting in bleachers. The audience had trouble hearing the dialogue because there was no sound system

When Jerry goes back up to tune into the fight, you can hear Larry David's voice doing the K.O. count.

Maryedith Burrell is reunited with "Fridays" stars Michael Richards and Larry David in this episode.

When Jerry decides to get his car into a garage because the fight starts in two minutes, he leaves the car door ajar. However, when we cut back to the car a moment later the door is closed.

It happens fast, but when Kramer hits his head on the blinds in Jerry's apartment, he raises his left hand to his head. In the shot right after that, his right arm is in the air, not the left one.

When George gets out of the car to see who stole his parking space, he opened the door and is about half way out of the car. However, when cuts to the next shot he's still sitting with his whole body in the car.

When George and Elaine are in the car driving back to Jerry's apartment, if you look in the corners of the shot you can see the plain-white wall of the sound stage.

When Matthew (the boy) argues with the old man, it is sunny out. As he goes and talks to Jerry, it suddenly gets dark.