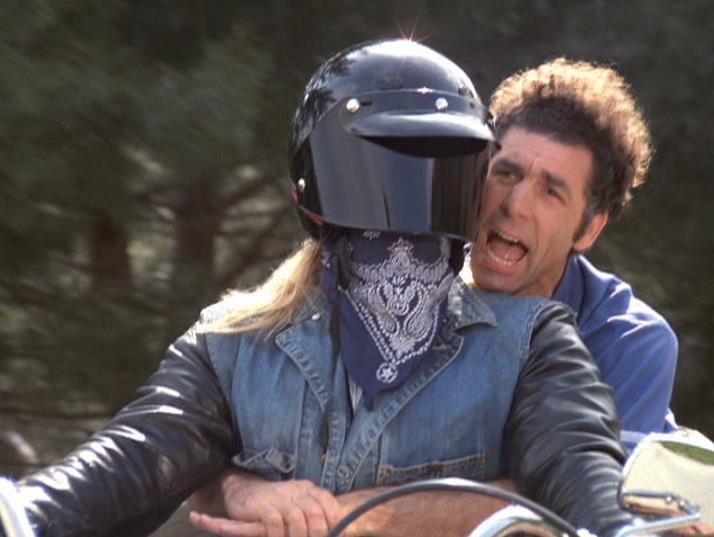 Hey! You ever been in an accident?

Kramer invades Jerry's life too much, so Jerry revokes his spare key privileges. Realizing that he has broken the "covenant of the keys" gives Kramer the realization he is now free to come out of the shadows. Kramer takes off for California to follow his acting dream. Jerry gave his spare keys to Elaine, then when he needs them, he goes with George to Elaine's (who has her keys) to search for his spare set. What they find is Elaine's show-biz project. Kramer finds adventure as he journeys across the country to LA where he gets a famous bit part on Murphy Brown.

Elaine: I gotta get some new friends.

(Newman refuses to tell Jerry and George where Kramer is)
Jerry: (to Newman) Now, you better tell me where Kramer is, or are we gonna have to do this the hard way?
(Hits the wall with his fist)
Newman: Help! Help!
Jerry: Where's Kramer?
Newman: Help!
(Elaine enters)
Elaine: What's going on?
(Newman hides behind Elaine)
Newman: They're gonna beat me up!
George: No we're not.
Jerry: We're trying to find out what happened to Kramer.
Newman: You wanna know what happened to Kramer? I'll tell you what happened to Kramer. He was ticked off. About they keys. Yeah, that's right - about the keys. Thought he got a bad rap.
Jerry: Bad rap?
Newman: Yeah, from you.
Jerry: Me?
Newman: You heard me. So he packed it up and split for the coast. La-La Land. LA.

Hippy: Hey Kramer, have you ever killed a man?!
Kramer: What do you think Junior? You think these hands - they've been soaking in Ivory Liquid?

Kramer: I was clinging to those keys, man, like a branch on the banks of a raging river, and now I have let go and I'm free to go with the current, to float, and I thank you.

Kramer: Having the keys to Jerry's apartment - that kept me in a fantasy world. Every time I went over to his house it was like a vacation: better food, better view, better TV, cleaner, oh, much cleaner. That became my reality. I ignored the squalor in my own life because I'm looking at life, you see, through Jerry's eyes. I was living in the twilight, living in the shadows, living in the darkness... like you.
George: Me?!
Kramer: Oh, I can barely see you, George.
George: Stop it Kramer, you're freakin' me out.

Kramer: Do you ever yearn?
George: Yearn? Do I yearn?
Kramer: I yearn.
George: You yearn?
Kramer: Oh, yes. Yes, I yearn. Often I sit...and yearn. Have you yearned?
George: Well not recently. I craved.

Jerry: You scared me!
Kramer: It's just me.
Jerry: That's enough!

Jerry: I heard something...

After Candice Bergen made a guest appearance on this episode, Jerry Seinfeld and Larry David returned the favor by appearing as themselves on "Murphy Brown" creator Diane English's other sitcom, Love & War (1992), where they receive a Seinfeld script in which Kramer sleeps with Elaine. This also echoes Elaine's writing a "Murphy Brown" script in that episode.

Candice Bergen was credited as a "Special Appearance".

In this episode, Julia Louis Dreyfus was pregnant with her first child, Henry. Throughout the episode, she hides behind various props. After this episode, Elaine doesn't appear again until "The Pitch".

The following two episodes (The Trip Parts 1 and 2) are continuations of this episode.

In the opening scene during his act, Jerry puts his hand over the microphone to make it sound like a pilot is talking. When the camera cuts away his hand is on his hip.

When Kramer and Jerry are talking in the apartment, Kramer has his arms out in the air. A second later, he's clasping his hands together.