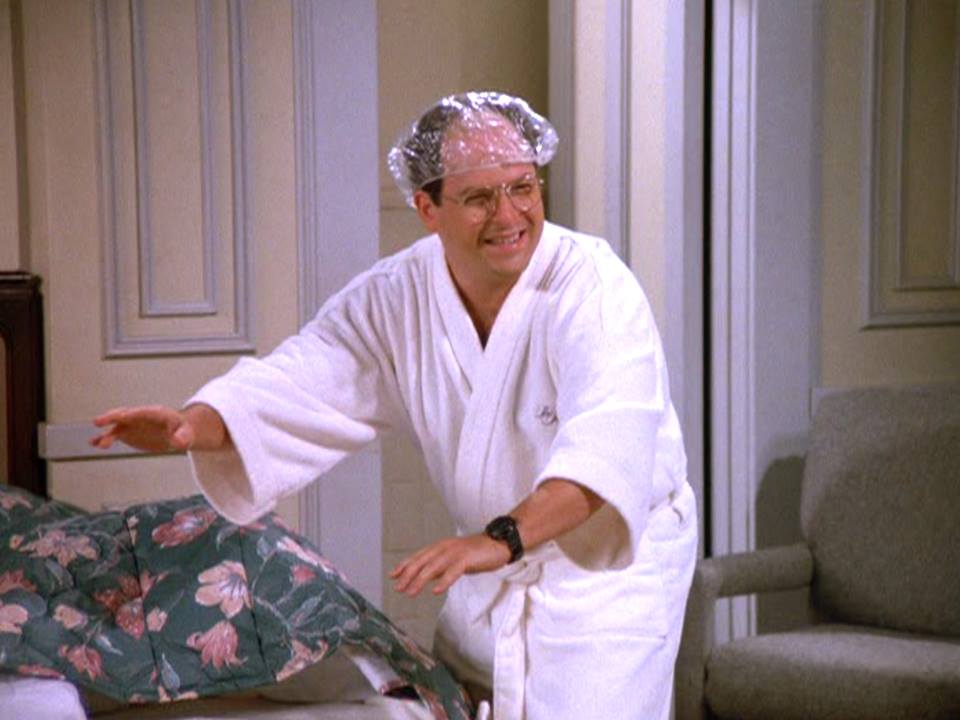 I like to take the blankets and swish them and swirl them, you know what I mean?

With Elaine in Europe, Jerry asks George to accompany him on a trip to LA and The Tonight Show; while there they will try to locate Kramer. While auditioning, Kramer must deal with the advances of an older female landlord (an actress who hasn't worked since 1934) and get someone in Hollywood to read his script treatment. A body is discovered; the victim, a young woman, was strangled. Kramer meets a woman at an audition and he gives her a copy of his script. Jerry loses the correct phrasing for some new jokes and George tries to get Lupe, the chambermaid, to make his bed just right. At The Tonight Show, George disturbs the guests and Jerry bombs. The woman Kramer gave the script to is strangled and his script is found in her possession. Kramer's face is shown on the news as the prime suspect for the "Smog Strangler," a serial-killer.

George: Alrighty, so that's one tuck and one no tuck.

Helene: It was sad for a Three Stooges picture, what with the dead baby and the Stooges being executed and all.
Kramer: Yeah, well that was an unusual choice for the Stooges.

Kramer: (giving a lecture) My personal acting technique is working with color. Imagining, then finding the emotional vibrational mood connected to the color. See, if you look through my scripts, you see that all my lines have a special color. So, I don't memorize language, I memorize colors. This way I can go through red, yellow, green, blue, and you have a full palette of emotions.

Jerry: (seeing George's big pile of luggage) It's a three day trip. Who are you, Diana Ross?
George: I dress based on mood.
Jerry: But you essentially always wear the same thing.
George: Seemingly. But, within that basic framework, there are a number of subtle variations, visible only to the trained observer, that reveal the many moods, the many shades, of George Costanza.
Jerry: And what is this?
George: This is morning mist.

George: (before going through a metal detector) I've always been a little nervous about these things. I'm afraid I'm going to step through into another dimension.

Hippy: I said, "Hey, Kramer, you ever kill a man?" And he says, "What do you think, junior? These hands been bathing in Ivory liquid?"

Ann Talman, Michael Richards' then girlfriend, is the woman bouncing next to him in the exercise video scene.

This is the second episode in which George complains about the way sheets are tucked too tightly. In "The Limo" he mentions that he can't try to outrun the Nazis because he pulled a hamstring trying to kick the sheets free from the bottom of the bed.

The Trip (1) and (2) are the first episodes since the pilot without Elaine Benes. Elaine is not even mentioned in the episode. Julia Louis-Dreyfus is away from the set as she was on maternity leave.

In keeping with the theme of not revealing Kramer's first name (at least until they do so in "The Switch") the cover page of Kramer's treatment found by the police is torn in such a way that his first name isn't shown.

The scene where Kramer approached Fred Savage to pitch his script was inspired by a real experience of writer Larry Charles. Charles once approached Richard Dreyfuss in a bookstore to pitch a script. According to Charles: "I was so excited I started to hyperventilate. I said, 'Don't be scared of me.'"

After Kramer makes a call to Candice Bergen, Helene stops him in the hallway and tells him she was in a Three Stooges short called "Sappy Pappies" from 1934. It should be noted that The Three Stooges never actually made a short with that title.

This episode marks the very first appearance of Ruth Cohen as the later self-named cashier Ruthie Cohen in Monk's Cafe.

When Kramer is in the hotel hallway talking to Helene, he puts his right hand in his pocket, but later when she talks about the dead baby, his hand is on his side.