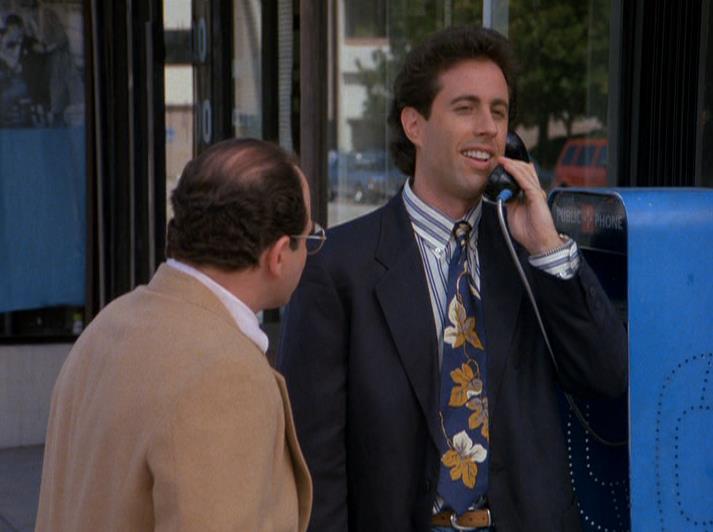 Jerry and George try to contact the police to tell them Kramer is innocent. Kramer still doesn't know he's wanted. Jerry and George get a ride in a police car and en route the officers pick up a possible 519. While the suspect is in the back of the car with George and Jerry, they ask him for tipping advice. When all units are called to Kramer's building, Jerry and George leave the police car door open and the 519 suspect escapes. While Kramer is in for questioning, another victim is found. Kramer is released and Jerry and George ask him his plans. He is going to stay in LA. Jerry and George are back in New York and Kramer walks in as if nothing has changed. When Kramer leaves, Jerry tosses him his keys, restoring his key privileges.

Kramer: You know, things are going pretty well for me here. I met a girl.
Jerry: Kramer, she was murdered!
Kramer: Yeah, well I wasn't looking for a long term relationship. I was on TV.
George: As a suspect in a serial killing.
Kramer: Ok, yeah, you guys got to put a negative spin on everything.

George: I can't ask them for change. They always make a face. It's like I'm asking them to donate a kidney.

Jerry: He says ask somebody, ask that guy right there.
George: Excuse me, where are we?
Man: Earth.
Jerry: You know I'm on the phone with the police, some guy just gave me a wise answer.

George: There's a bag of Pepperidge Farm cookies up there.
Jerry: What kind?
George: Milano.
Jerry: Cops eating Milanos, what kind of crazy town is this?

Kramer: How'd you know about the guy in the park?

George: Kramer? What are you doing here?
Kramer: Getting something to eat.

Julia Louis-Dreyfus does not appear in this episode as she was on maternity leave.

Clint Howard, who plays the car thief, is the brother of Ron Howard. In fact, their father, Rance Howard, has also made two appearances in the series, in the episodes "The Glasses" and "The Bottle Deposit (2)."

If you look carefully at the crowd gathered outside of Kramer's LA apartment when the police come to arrest him, you can see Larry David and Larry Charles on the right.

Actor Marty Rackham first appeared as an LAPD officer in "The Trip, Part 2". He appears also in "The Sniffing Accountant", "The Opposite" and finally "The Scofflaw" as an author and boyfriend of Elaine.

When the police car is notified to help apprehend the smog strangler, they show a scene where the car makes a left turn. After completing the turn, the back seat is clearly visible and it is empty. Where is Jerry and George?

When Jerry, George and Kramer are talking on the bench, George lifts up his sandwich to take a bite. A moment later, the hand with the sandwich is back down by his lap.

Jerry is talking about the 12-gauge shotgun in the police car. George remarks that the 12 gauge "makes the 11 gauge look like a cap pistol." However, when referring to shotgun gauges, an 11 gauge is actually larger than a 12 gauge. (Maybe not actually a goof, as these two characters don't really know what they are talking about.)