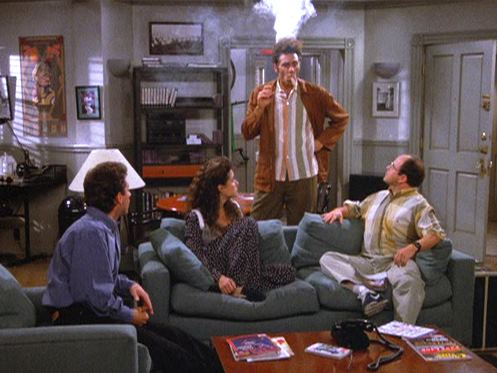 Jerry's parents come to town to see a back specialist, they hear about "Crazy" Joe not liking Jerry and ask about the watch they gave him. George "negotiates" the deal with the NBC and gets a box of cigars from Susan's father. While at the doctor's office Morty's wallet is "stolen". Elaine returns from her trip and tries to end her relationship with her shrink. The deal with NBC is lost.

Helen: Why did you tell this crazy guy that Kramer didn't invite him to his party?
Jerry: I didn't know he wasn't invited.
Morty: Hey, these are very comfortable pants. You know what I paid for these Jerry?
Helen: So why did you say anything?
Jerry: It was a mistake.
Morty: They're good around the house and they're good for outside!

Jerry: Let me explain to you what you just did. There are literally hundreds of people trying to get pilot deals with them this year. They go with maybe five. Okay, if we pass, that's it. They go to the next show.
George: Ooooo, I'm scared...Ohooo, they're not gonna do the show.
Jerry: We're lucky they're even interested in the show in the first place. We got a show about nothing. With no story. What do you think, they're up there going, "Hey, maybe we should give those two guys, who have no experience and no ideas, more money"?
George: Ohooo, what are we gonna do? I'm shaking. I'm shaking.

Dr Reston: Elaine, do you remember your dream where you had a sexual encounter with a Chinese woman?

Morty: (reading the form) 'Have you ever had a sexually transmitted disease?'

Uncle Leo: I just talked to Dr. Dembrow's son. He said they almost had to call the police.
Morty: What are you talking about? I'm the one who should've called the police. They stole my wallet.
Uncle Leo: You know how hard it was for me to get that appointment for you? You can't just walk in on this guy. He did me a personal favor.
Morty: All right, Leo.
Uncle Leo: And you walked out without paying.
Morty: How was I supposed to pay? I didn't have my wallet.
Uncle Leo: Well, I hope you send him a check.
Morty: What for?
Uncle Leo: What for? This man was nice enough to see you. He did me a personal favor.
Morty: That's the second time you said "personal favor." Why do you keep saying that?
Uncle Leo: I said it once.
Morty: Twice! And Dembrow doesn't even know you. His son happens to live on your floor.

Jerry: (monologue) Don't you hate "to be continued" on TV? It's horrible when you sense the "to be continued" coming. You know, you're watching the show... You're into the story. There's like five minutes left and suddenly you realize, "Hey, they can't make it! Timmy's still stuck in the cave! There's no way they're gonna wrap this up in five minutes!" I mean, the whole reason you watch a TV show is because it ends. If I want a long, boring story with no point to it, I have my life. A comedian can't do that, see. I can't go, "A man walks into a bar with a pig under his arm -- Can you come back next week?"

This episode marked Julia Louis-Dreyfus's full return to the series. Louis-Dreyfus was on maternity leave. She did not appear in "The Trip" and made pre-recorded cameo appearances in "The Pitch" and "The Ticket". This is why the studio audience cheers loudly when she enters Jerry's apartment.

During the filming of the scene in which Kramer accidentally sets his hair on fire, Michael Richards wore a wig to protect his scalp. When he ran into the bathroom, the wig fell off causing the cast to laugh. They can be seen beginning to laugh just before the scene is cut.

This episode is the first episode where we see George actually meet Jerry's parents.

This episode has the first scene where Morty and Helen appear without Jerry.

When Jerry follows Kramer back to Kramer's apartment to tell him about the watch and to not ask about it again, Kramer is holding a can of Pepsi. Later, the soda can suddenly disappears.

Near the end of the episode in Monk's, George has a fork in his hand, and then suddenly he is holding a cup of coffee.

About five minutes into the episode, the water bottle on the table in front of Kramer and Jerry's father in Jerry's apartment disappears and reappears.

When Jerry is done driving his father and mother back to his apartment, he takes off his jacket twice.

Morty's x-ray has a label that changes sides between shots, and at one point completely disappears, and then reappears.