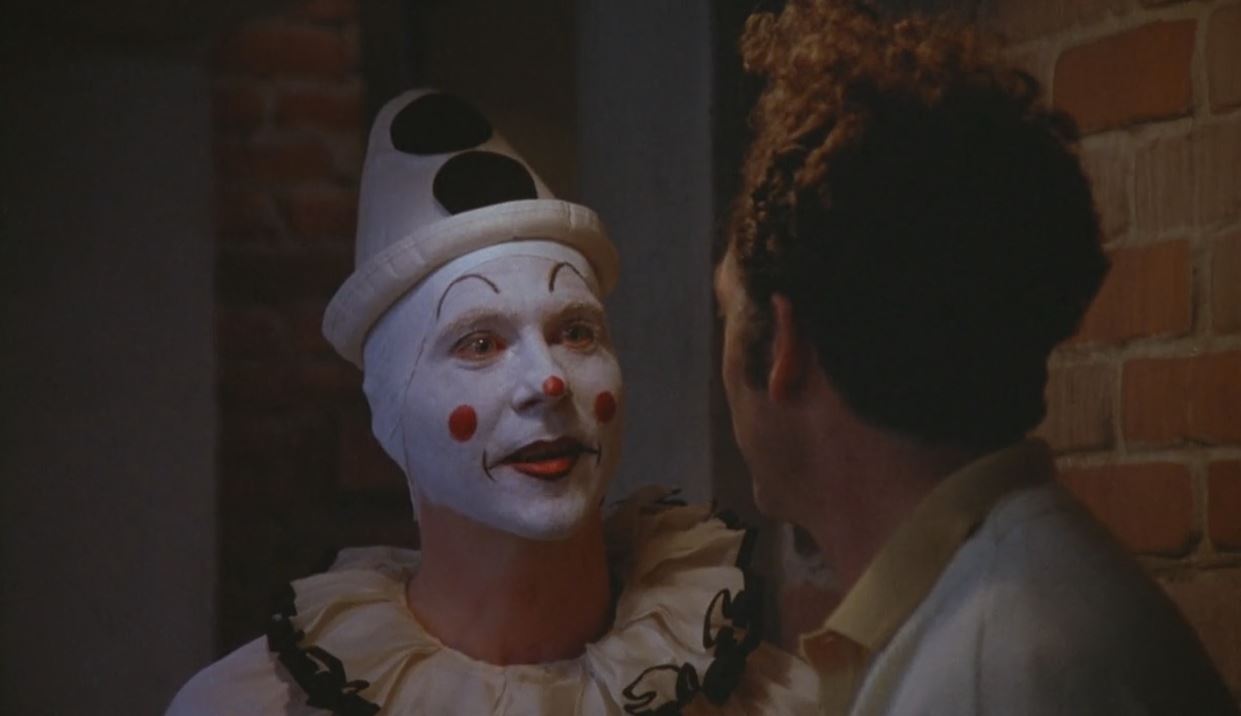 Are you still scared of clowns?

Crazy Joe leaves Jerry a message saying he will put the "kibosh" on him. Kramer has tickets for the opera, Pagliacci, and everyone is going including Elaine and her boyfriend "Crazy" Joe. Elaine drops in on Joe's apartment and is she surprised by what she discovers, so she maces him with cherry Binaca and ends their relationship. Susan can't attend, so George tries to scalp her ticket. Joe, a big fan of Pagliacci, comes to the opera in clown garb; Elaine and Jerry attend together not realizing their different estranged relationships with Joe.

Jerry: The hardest part about being a clown, it seems to me, would be that you're constantly referred to as a clown. "Who was that clown?", "I'm not working with that clown, did you hire that clown?", "The guy's a clown!". How do you even start into being a clown, how do you know that you want to be a clown, I guess you get to a point where your pants look so bad, it's actually easier to become a clown than having the proper alterations done. Because if you think about it, a clown, if there isn't a circus around them, is really just a very annoying person. You're in the back seat of this guy's Volkswagen, "What, you're picking somebody else up? Oh man!"

Joe Davola: Hello, Jerry. It's Joe Davola. (spits) Sorry, I had a hair on my tongue. But, of course, you should know; you put it there. I know what you said about me, Seinfeld. I know you bad-mouthed me to the execs at NBC; put the kibosh on my deal. Now I'm gonna put the kibosh on you. You know I've kiboshed before, and I will kibosh again.

George: Do you know the last time I wore this thing? Six years ago, when I made that toast at Bobby Leighton's wedding.
Jerry: Oh, that was a bad toast.
George: It wasn't that bad.
Jerry: I never heard anybody curse in a toast.
George: I was trying to loosen 'em up a little bit.
Jerry: There were old people there, all the relatives. You were like a Redd Foxx record. I mean, at the end of the toast nobody even drank. They were just standing there, they were just frozen! That might have been one of the worst all time toasts.
George: Alright, still her father didn't have to throw me out like that, he could have just asked me to leave. The guy had me in a headlock!

Elaine:You know, it's so sad that all you know about high culture comes from Bugs Bunny cartoons.

Jerry: The idea behind the tuxedo is the woman's point of view that men are all the same, so we might as well dress them that way. That's why a wedding is like the joining together of a beautiful glowing bride, and some guy. The tuxedo is a wedding safety device created by women because they know that men are undependable. So in case the groom chickens out, everybody just takes one step over and she marries the next guy. That

Elaine: Are you alright? You don't seem like yourself
Joe: Who am I?
Elaine: Good question..very existential. Who am I?..well obviously (looking at wall of photos of her)

George: We'll take it.
Kramer: No.
George: No, are you crazy?
Kramer: Let me handle this.
George: That's $500 that's a great deal.
Kramer: Man, you're blowing it, the guy's a pigeon.
George: This is not a Metallica concert, it's an opera. A little dignity, a little class.

Ticket Taker: A crazy clown is after you? Oh, that's rich!

(Loud thump is heard from the door)
Jerry: Who is it?
Kramer: It's me!
Kramer: Why are you locking the door now?

Elaine: Oh, dammit, you know I just remembered I gotta go. I left something on, the gas, the lights, the water in the tub. Something is on somewhere so I

Elaine: You left your door open.
Joe Davola: I know, I like to encourage intruders.

Joe: Are you still afraid of clowns?
Kramer: Uh-huh...

Jerry: But officer, he threatened me. I don't understand, that's not right. What if it was the President of the United States, I bet you'd investigate. Well, so what? What's the difference? I'm a comedian of the United States. And I'll tell you, I'm under just as much pressure.

Jerry: I don't like the opera. What are they singing for? Who sings? You got something to say, say it.

Jerry: I like this opera crowd; I feel tough.

The music from Pagliacci was also heard in "The Keys", when Jerry phones Kramer's mom to ask her about Kramer. She was totally drunk, listening to the music.

For this episode, Jerry Seinfeld was nominated for the 1993 Emmy Award for "Outstanding Lead Actor in a Comedy Series".

The song Jerry sang, "Overture, curtain, lights/this is it, we'll hit the heights/and oh, what heights we'll hit/on with the show this is it!"; was the theme song used for the Bugs Bunny/Road Runner Show Saturday mornings on CBS.

The scene where Elaine goes to Davola's apartment is incredibly dark for the Seinfeld series.

When Joe Davola is leaving a message on Jerry's machine, he spits four times because of the hair on his tongue. Yet when Jerry plays the message a while later, we only hear Davola spit three times.