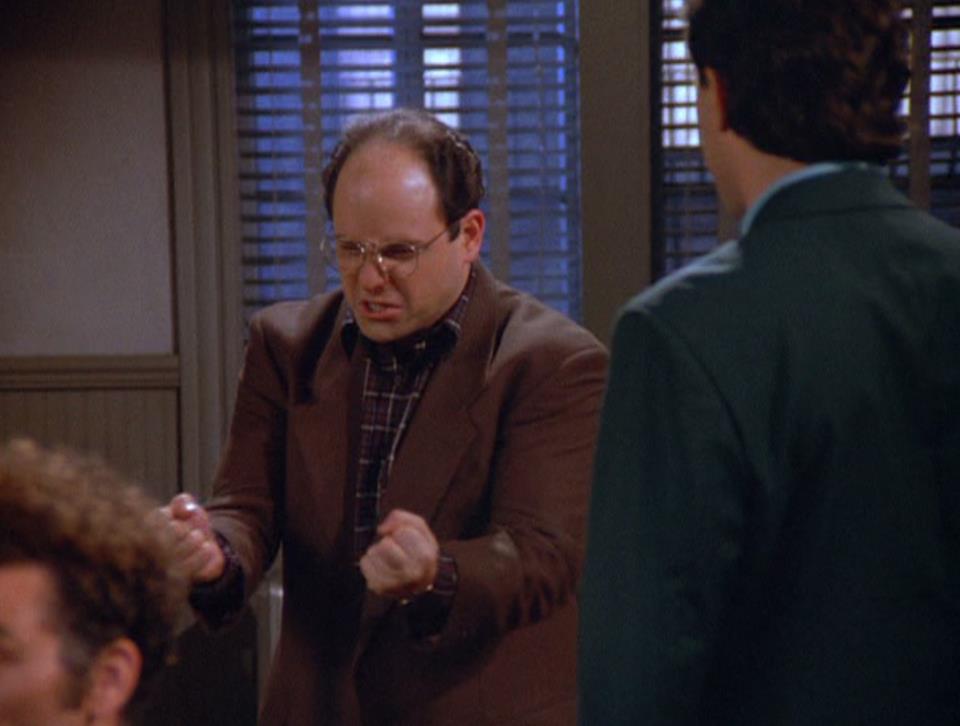 Every time I think I'm out, they pull me back in!

After much procrastination, George and Jerry strain to think of an idea for their TV series a few hours before a meeting with NBC executives. Jerry finds out a girl he once met is still a virgin, and later Elaine educates her about men after sex. George wants to end his relationship with Susan so he can exploit his writing profession as a pick-up line. Elaine runs into a Chinese delivery boy. Kramer watches too much television.

George: She's got a big crush on David Letterman, I mean a big crush. She talks about him all the time. Suppose I go up to David Letterman. He works at NBC, I work at NBC. I explain my situation. He agrees to meet her. They go out. They fall madly in love. And she dumps me for David Letterman!

George: I don't think I could do it. You know, they always remember the first time. I don't want to be remembered. I wanna be forgotten.

Jerry: you know, it's a very interesting situation. Here you have a job that can get you girls. But, you also have a relationship. But if you try and get rid of the relationship so you can get the girls, you lose the job. You see the irony?

Jerry: Let me ask you something. When's the last time you went skiing?
George: About six years ago.
Jerry: I think you can take the lift ticket off your jacket now.
George: Women like skiers.

Elaine: This whole sex thing is totally overrated. Now, the one thing you gotta be ready for is how the man changes into a completely different person five seconds after it's over. I mean, something happens to their personality. It's really quite astounding. It's like they committed a crime and they want to flee the scene before the police get there.

George: Hey, what about this? I'm in a car accident. The motorist is uninsured, you with me?
Jerry: Yeah.
George: My car's totaled. It's all his fault and now, he has absolutely no money. There is no way that he can pay me. So the judge decrees that he becomes my butler.

Jerry: This is your plan?
George: No, no. I'm just thinking.
Jerry: I don't think you are.

George: Every time I think I'm out, they pull me back in!

(George just found out that Susan was fired)
George: This is great! He fired her! This is incredible, he fired her. I'm out, baby! I'm out!
Jerry: Why did he fire her?
George: Because I kissed her in the meeting. Russell found out, he fired her over the phone. Finally, my stupidity pays off!

Elaine: Marla and I went out for coffee and afterwards I was crossing the street and he was biking right towards me. So I got out of the way just in time, but then he ran into a parked car. He hit his head and everything went flying.
George: Something happened to the food?!!

Jerry: She's a virgin. She just told me.
Elaine: I didn't know.
Jerry: Well, it's not like spotting a toupee!
Elaine: Do you think I should say something? Should I apologize? Was I being anti-virgin?

Jerry: Let me ask you this: is there any Tampax in your house?
George: Yeah...
Jerry: Well, I'll tell you what you got here. You got yourself a girlfriend.
George: Oh no!

Jerry: So your boyfriend never came back from Berlin?
Marla: Never came back.
Jerry: Oh, you must have been devastated being left for a wall.

The TV Guide that Kramer reads is the Sept. 5, 1992 issue with Joan Lunden on the cover.

Following the broadcast of this episode, Michael Richards played Kramer in a crossover with "Mad About You". In the episode called "The Apartment" Paul Reiser must get rid of his old apartment, in which Kramer has been (apparently) subletting from him.