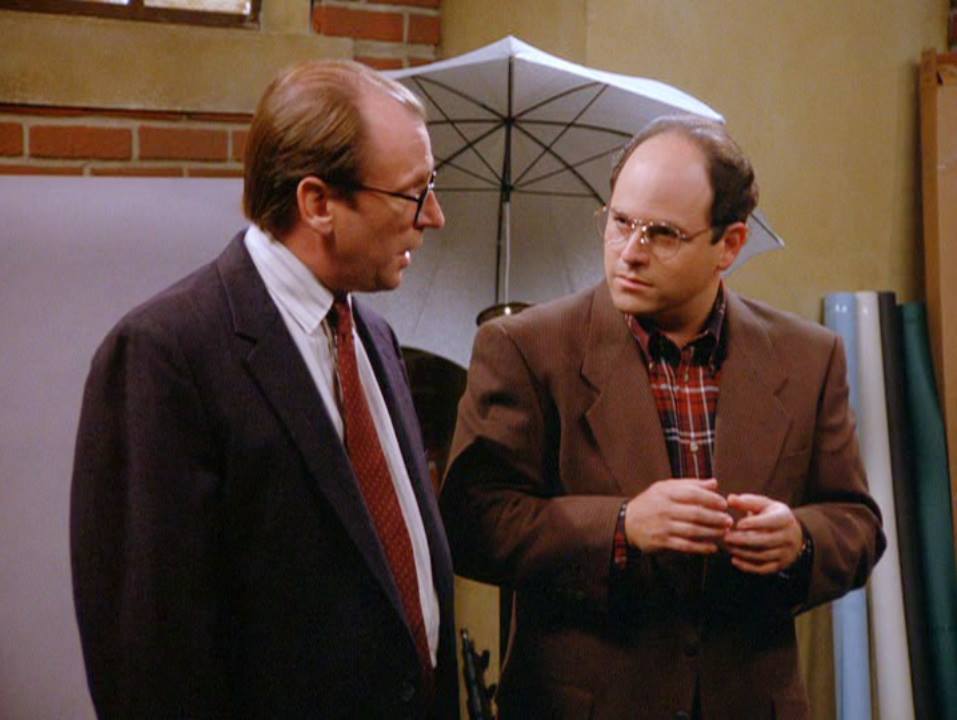 He was not master of his domain.

George swears off doing 'you know' after being caught by his mother, causing her to throw her back out and ending up in the hospital. When Jerry proposes a contest to see who can go the longest without. Elaine and Kramer want in, but the four of them soon get into situations that test their will power to temptation.

Jerry: (looks out the window, shocked) Oh my God in heaven!
(all three crowd around the window)
Elaine: (gasps) Is that...?
George: Kramer?!
Elaine: He's waving...
(all three wave back)

George: I am king of the county. You?
Jerry: Lord of the manor.

George: I didn't know whether to try and keep her from falling, or zip up.
Jerry: What did you do?
George: I zipped up!
Elaine: So, she fell?
George: Yeah. Well, I couldn't run over there the way I was!

Jerry: She's driving me crazy, I can't eat, I can't sleep, I'm here, I'm climbing the walls. Meanwhile I'm in this contest, I'm datin' a virgin, SOMETHING'S GOT TO GIVE!

Joyce: I can get you a spot right behind him. He has got a great butt.
Elaine: Yeah. Butt. Butt. Great butt. John-John's butt.

George: What are you doing tonight?
Jerry: Date with Marla.
George: Oh, the virgin? Any progress there, what's the latest?
Jerry: Well, I've got my troops amassed along the border. I'm just waiting for someone to give me the go-ahead.

Kramer: So, you're still master of your domain.
Jerry: Yes. Yes I am. Master of my domain.

Elaine: What're you looking at?
Jerry: There's a naked woman across the street.
Elaine: (smiling, chuckling) This is gonna be the easiest money I've ever made in my life.

Jerry: I haven't been myself lately. I've been snapping at everybody.
George: Me too. I've been yelling at strangers on the street.

Marla: (sleeping with JFK Jr.) Oh, John. That was wonderful.

Jerry: (on Kramer's chance of winning the contest) You'll be out before the check comes!

Elaine: What happened?
Jerry: I told her about the contest.
Elaine: Ohh, boy, she's a whack-o.

Jerry: Alright, Costanza. It's just you and me.
George: And then, (smacks the money) there were two.
Elaine: Elaine Benes Kennedy Junior...

(George is hypnotized by a sponge bath with a female patient)
Estelle: George, you're cousin, Shelly, is talking to you!
(George is still focused)

George: I stopped by the house to drop the car off, and I went inside for a few minutes. Nobody was there. They're supposed to be working. My mother had a Glamour magazine; I started leafing through it...
Jerry: Glamour?
(Kramer and Elaine laugh slightly)
George: So, one thing lead to another...
Jerry: So, what did she do?
George: First she screams, "George, what are you doing?! My God!"

Jerry: What's the matter?
George: My mother caught me.
Jerry: Caught you? Doing what?
George: You know. (All three give him blank stares) I was alone...
Elaine: You mean..?!
George: (Nods) Uh-huh.
Kramer: (laughing) She caught you?

(after learning that Elaine is out of the "contest")
George: You caved?!
Jerry: It's over?!
George: You're out?!
Jerry: Oh my God, the Queen is dead!

Jerry: (after George tells him about the hot nurse who gives sponge baths to the gorgeous patient)
Well, I guess you'll be going back to that hospital.
George: Well Jerry, my mother...

Jerry: But the question is, are you still master of your domain?
Elaine: I'm queen of the castle.

(Kramer sits in front of Jerry's window to see a naked lady)
Jerry: She's not there!
Kramer: Oh, I can wait...

Jerry: We have to do it. It's part of our lifestyle. It's like, uh, shaving.
Elaine: Oh, that is such bologna. I shave my legs.
Kramer: Not everyday.

Estelle: Too bad you can't do that for a living. You'd be very successful at it. You could sell out Madison Square Garden. Thousands of people could watch you! You could be a big star!

Elaine: (angrily) He left with Marla, the virgin?!

Estelle: I don't understand you. I really don't. You have nothing better to do at 3:00 in the afternoon? I go out for a quart of milk; I come home, and find my son treating his body like it was an amusement park!

According to Larry David on the Season 4 DVD extras, the censors requested only one change to the script: the removal of the word "Snapple".

This episode was based on a real-life "contest" that Larry David had with friends that reportedly lasted several months. Apparently, Larry David won... just like George.

This episode marks the first appearance of George's mother Estelle.

In the 2008 Emmys the scene where the gang create and start the contest, was in the Top 5 Memorable Moments.

This episode received an Emmy nomination in 1993 for Outstanding Individual Achievement in Directing in a Comedy Series.

George throwing the Tic Tacs on the bed for Estelle to eat so she would stop complaining was completely improvised by Jason Alexander. According to Jerry Seinfeld, this was not part of the script, and after Jason Alexander did it, Estelle Harris could not stop laughing for 20 minutes.

TV Guide named this episode, specifically the moment where Kramer says he's out, as the third funniest moment in TV history.

Tom Cherones won the Director's Guild of America Award for this episode.

Thanks to this episode, Seinfeld won the Emmy for best Comedy, Writing and Supporting Actor (Michael Richards).

When Elaine says, "And then there were three", she is making a reference to Agatha Christie's book "And Then There Were None," which was also published as "Ten Little Indians."

In the final episode of the series, George reveals that he cheated in the contest.

When Jerry and Marla are making out on the couch and someone walks by the bathroom window in the background.