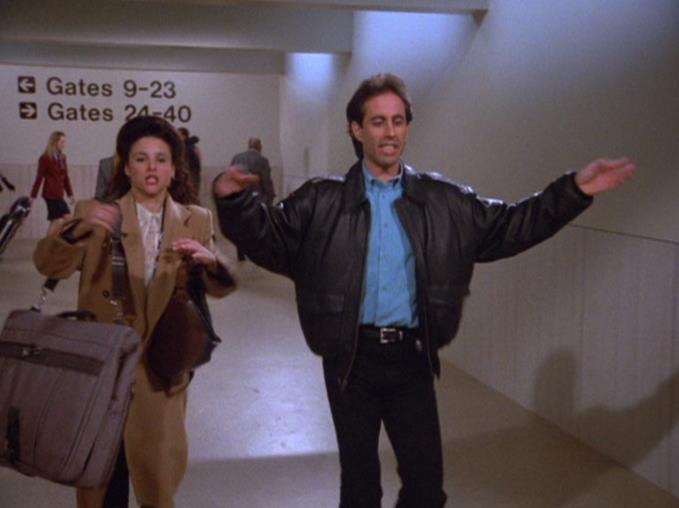 You wanna make this plane, you've gotta run like a man!

When their flight home gets canceled, Jerry & Elaine gets on another flight, the latter gets cramped into coach and Jerry parties in 1st class with a model. George and Kramer go between JFK and La Guardia to pick them up. When they settle on an airport George meets a convict and Kramer sees a man who owes him $240 from years ago.

Elaine: Oh, look at this. He's sleeping and I have to go to the bathroom. Maybe he'll wake up soon. What if my kidneys burst? Is it worth it not to wake this man up to damage a major organ?

(the plane lands, Jerry looks out the window and sees Kramer running)
Jerry: (to himself) Nah, couldn't be.

Kramer: Listen, I didn't do anything wrong. That guy owes me 240 bucks!
Security Guard: Now, you're in big trouble.
(Kramer breaks free from his arms and runs off)

George: You bought non-refundable tickets, you idiot!
Kramer: She talked me in to it. She said it was the best deal.

Attendant: You're not supposed to get up during the food service.
Elaine: Well, nobody told me that!

Elaine: (To herself, loudly to the guy next to her) Wake up, you human slug! Wake up!Wake up!!

(After Jerry selfishly takes the lone first-class seat available he confronts Elaine about the issue)
Jerry: Elaine, have you ever flown first-class?
Elaine: No.
Jerry: All right then. See, you don't know what you're missing. I've flown first-class. I can't go back to coach. I can't, I won't.
Elaine: We flew here coach.
Jerry: Yeah, that's true.
Elaine: Oh, alright. If the plane crashes, everyone in first class is going to die anyway.
Jerry: Yeah, I'm sure you'll live.

George: You don't understand, there's a blurb about me in this magazine!
Prisoner: A blurb?! You're a blurb! Check out the cover, idiot!
Guard: All right, let's go.
(George checks out the cover shot which shows a picture of the aforementioned prisoner with the caption "Caught!" written below.)

Tia: So, he says, "squeeze your breasts together," and I say, "I thought this was an ad for shoes." (Tia and Jerry both laugh)
Jerry: Oh my...

Tia: This ice cream is really nice.
Jerry: Oh you know what, they've put the fudge at the bottom of the ice cream. That way you can control your fudge distribution as you eat it.
Tia: I never knew a man who knew so much about nothing.
Jerry: Thank you.

Jerry: I hate rental cars. Nothing ever works: the window doesn't work, the radio doesn't work... and it smells like a cheap hooker.

Attendant: More anything?
Jerry: More everything!

Jerry: Tia, did you see all the flowers in that bathroom? It's like an English garden in there.
Attendant: They're gardenias, mostly.
Jerry: I thought I smelled lilac.
Attendant: Yes, there are a few of those, too.
Tia: It's almost overwhelming.

(approaches to the guy that was sitting next to her as he is sleeping)
Elaine: HEY!!
(the man wakes up in surprise)

George: No-no-no, Kramer. Kramer! Kramer! You cannot abandon people in the middle of an airport pickup! It's a binding social contract. We... we must go forward... not back.

Jerry: You see? Never be late for a plane with a girl. Because a girl runs like a girl, with the little steps and the arms flailing out. You wanna make this plane, you've gotta run like a man! Get your knees up!

Kramer: Listen to the bell, Grossbard...it tolls for thee.

Jerry: I got my bags. I'm ready to go.
Elaine: Yeah, you got your bags!
(scene goes to Honolulu International Airport where we see Elaine's luggage going around the baggage terminal)

Kramer: (stuck in traffic) How does it look on your side? (George just stares at him angrily) We'll get there.

Jerry: It smells like a cheap hooker. Or is that you?
Elaine: Give me ten bucks and find out.

George: But you are, blanche. You are in the shackles!
Prisoner: You son of a... (gets taken away)
George: (happily) Oh, I can't wait to read my Time magazine. Last copy too. Maybe I'll read it tomorrow, in the park! It's supposed to be a beeyoouutiful day! Have a nice life, sentence that is! Oh, you miserable...

George: They're not here! You cost me fifty bucks!
Kramer: Look at you! You run like a girl! Run like a man! Lift your knees!

Jerry: What is all the racket back there? You know, you're trying to relax on the plane and this is what you have to put up with. (to attendant) What is going on?
Attendant: Sir, this woman tried to sneak into first class.
Jerry: Oh, you see, that's terrible. The problem is that curtain is no security. There really should be a locking door.

Elaine: You're eating my food!!

Attendant: Would you care for some slippers?
Jerry: Sounds lovely! (To Tia) May I?
Tia: Please! (puts slippers on her)
Jerry: Why, It's a perfect fit. You must be Cinderella.

Elaine: (to a woman next to her) Yeah, make a little more noise with your gum; that's helpful.

Elaine: Do you realize the people back here are getting cookies!?

Although Jerry and Elaine are flying a fictional airline, the plane exteriors shown in the episode belong to Southwest Airlines' planes.

This episode was nominated for the 1993 Emmy Award for Outstanding Individual Achievement in Sound Mixing for a Comedy Series or a Special.

As they are driving to the airport in St. Louis, Jerry mentions that Elaine got a chance to see her sister on this trip.

Larry David is the voice of the man who ordered the kosher meal.

Seinfeld writer Larry Charles makes a cameo appearance as the person who stinks up the bathroom before Elaine goes in.

When George taunts the murderer with, "But you are, Blanche. You are in the shackles!", he is making a reference to the classic film "What Ever Happened to Baby Jane?" (1962)

While Jerry and Elaine race through the airport to get to their flight on time they run around a corner and past a sign that reads "Gates 9-23. Gates 24-40". They run forward down a passageway until they are out of camera range, then the next scene shows them running around the opposite corner by the same sign, and then down the same passageway. In addition, some of the same extras are seen walking through both passageways.

Jerry and Elaine get the "last two seats, one in First Class and one in Coach" but, later on we see that there is an empty seat in First Class. (typical airline!)

Jerry puts only one slipper on Tia's foot and then they continue to drink champagne.