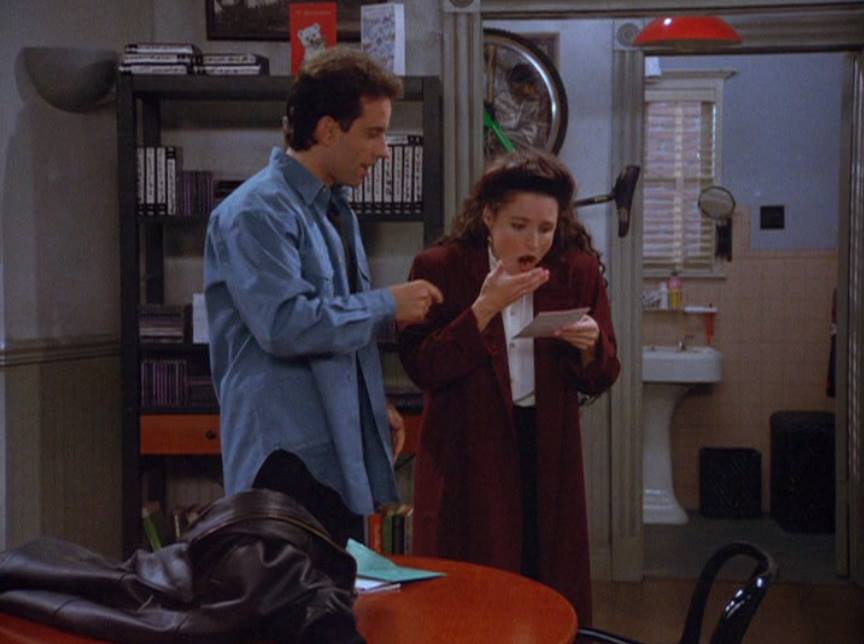 Oh my god! That's my nipple!

Elaine is humiliated when she accidentally shows a bit too much on her Christmas card photo, that she has sent out to everyone she knows. Jerry has a date with the model from the plane, she later dumps Jerry because of "The Pick." George tries to reunite with Susan, but realizes it's a mistake, and uses "The Pick". Kramer goes to Calvin Klein to complain about "The Ocean," a fragrance they stole from him, and is asked to pose for a risqu

Elaine: Not only didn't you love her, you didn't even like her.
George: Who says?
Elaine: You did.

Jerry: But I was clearly on the outer edge of the nostril.
Tia: I know what I saw. (Turns toward the elevators)
Jerry: But there, but there was no pick! I, I did not pick! There was no pick!
Tia: I gotta go. (she quickly walks away from Jerry)
Jerry: No! No pick!

Jerry: Here. Take a look at this card. Tell me if you notice anything unusual about it.
Newman: Yeah, your nipple's showing.

Elaine: (shocked) That's my nipple. My nipple's exposed. I sent this card to hundreds of people! My parents. My boss. Ah, Nana and Papa.

George: What is with this damn zipper?

George: Was it a scratch or a pick?
Jerry: It was a pick!
George: Hey, it's me you're talking to! Was there any nostril penetration?
Jerry: (stutters) There may have been some accidental penetration!

Kramer: THE BEACH!!! (enters the apartment) You smell like the beach. What's the name of that perfume you're wearing?
Tia: It's Ocean by CALVIN KLEIN.
Kramer: CALVIN KLEIN? No, no. That's my idea. They, they stole my idea. Y'see I had the idea of a cologne that makes you smell like you just came from the beach.
Jerry: I know look at this (shows an ad from CK)
Kramer: (shocked) Whooo! That's you! What is going on here? The gyp, he laughs at me then he steals my idea. I could have been a millionaire. I could have been a fragrance millionaire, Jerry. They're not going to get away with this. (leaves)

Kramer: What's the matter with you? I just wanted to see how tall she was.
Jerry: Oh, you're tall. She's tall I'm tall. What's the difference who's tall? We're all tall.

Elaine: Let me tell you, I didn't intentionally expose myself, but, now, I wish I had. For it is not me, but you who have been exposed, for I have seen the nipple on your soul!

George: So we go to her apartment and she goes to the bathroom. I'm cursing myself, "now how do I get out of here?" Then it hit me like a bolt of lightning. The pick!

Jerry: Let me ask you something. If you were going out with somebody and if she did that what would, would you do? Would you continue going out with her?
George: No. That's disgusting!

Jerry: Is that so unforgivable? Is that like breaking a commandment? Did God say to Moses thou shalt not pick?

Jerry: Volunteer work... See, that's what I love about the holiday season. That's the true spirit of Christmas. People being helped by people other than me. That makes me feel good inside.

Co-worker: (Pokes his head into the doorway) Hey, Nip, you need that manuscript or can I take it home?
Elaine: Yeah, take it! Take it! And stop calling me "Nip"!

Jerry: Did you look at look at this picture carefully?
Elaine: Carefully?
Jerry: Because I'm not sure and ... and ... and correct me if I'm wrong but I think I see a nipple.

Jerry: So, I'm thinking of putting in a tropical fish tank right here.
Tia: Are you sure you're ready for that kind of commitment?
Jerry: Well, I figure if it doesn't work out I can always flush them down the toilet.
Tia: That's horrible!

Jerry: I am not an animal!

George: Is this Elaine? (picks up the card)
Dana: Yeah.
George: Huh! (makes an unusual look to the card)

George: (singing) Oh hey, if you happen to see the most beautiful girl who walked out on me. Tell her I'm sorry. Tell her I need my baby, oh, won't you tell her. I love her. Oh, hey...
Jerry: George I'm afraid I'm going to have to ask you to leave.

George: She made a big breakfast every Sunday. I don't know what she put in those eggs.

Kramer: I just wanted to borrow your "Dust Buster."

CK Representative: His buttocks are sublime.

Jerry and Newman don't say "Hello" as they usually do.

When Kramer is in the Calvin Klein meeting room in his jockeys and he slides down the wall, he leaves a giant smear of body makeup on the wall.