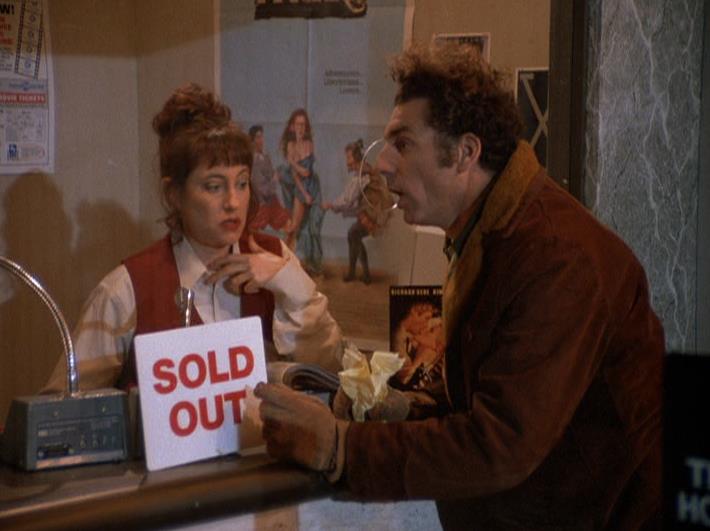 A short guy with glasses, looked like Humpty Dumpty with a melon head.

Jerry tries to make two show dates and afterwards go to the movie theater to meet everyone. George gets in the wrong line for tickets. George, Elaine & Kramer decide to go to another theater to see the movie. Kramer waits outside for Jerry but also wants a hot dog. Jerry misses his first show, then goes to movie theater to tell everyone he won't make the movie, but no one is there. Through a comedy of errors, everyone (but Kramer) misses the movie, they were originally going to see.

George: (describing Jerry) Like, a horse face, big teeth, and a pointed nose.

Elaine: (describing Kramer) Have you seen a tall, lanky dufus with a bird face and hair like the bride of Frankenstein?

Elaine: No, I don't want to go to a mini-plex multi-theater! It's not a theater, it's like a room where they bring in POW's to show them propaganda films.

Kramer: (describing Jerry) A guy who's about five foot eleven, he's got uh, a big head and flared nostrils.

Elaine: George, you're sappin' my strength.

Jerry: (to his annoying colleague Pat) No, I'm not riffing. I'm ignoring. Do you understand the difference?

Elaine: Men can sit through the most pointless, boring movie if there's even the slightest possibility that a woman will take her top off.

The Ticket Lady: (describing George) A short guy with glasses, looked like Humpty Dumpty with a melon head.

George: I have been going to the movies for 25 years and nobody ever asks me for the stub.

When Kramer is sitting in "Checkmate", eating his hot dog, you can hear the dialogue between two actors on the screen. One of them says, "Yes, but it's only a game." This is the voice of Jerry Seinfeld. Larry David provides yet another voiceover as one of the characters in "Checkmate".

This episode marks the first time we hear of the (fictional) film "Rochelle, Rochelle".

This is one of the few episodes in the series that doesn't include any scenes in Jerry's apartment.

Writer Steve Skrovan appears in an uncredited cameo as the man with the white hat that sits next to Elaine at the movie.