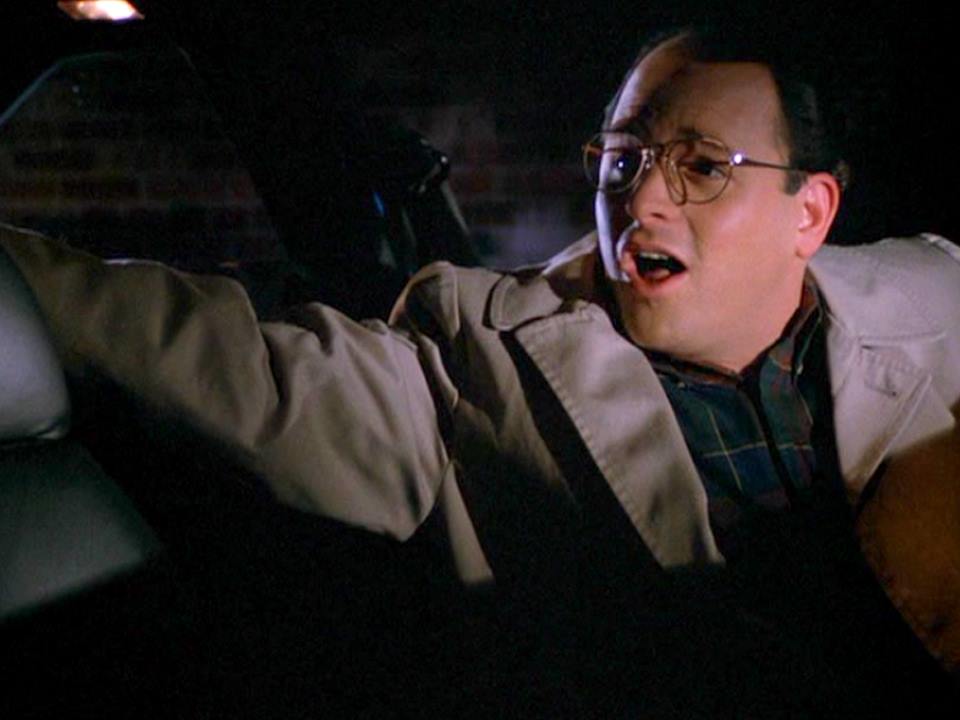 I'm disturbed! I'm depressed! I'm inadequate! I got it all!

George meets a Chinese female lawyer who thinks he is real funny; so he tells Jerry not to be funny around her, but she becomes attracted to this. Kramer returns early from baseball fantasy camp, where he accidentally punched Mickey Mantle. A mix-up with Jerry's mail causes Babu to be arrested for not renewing his visa. Jerry tries to get the lawyer to help Babu, but George's honesty when his relationship is threatened causes Babu to be deported and Elaine to still be sued by the delivery boy she hit.

Elaine: (about George) He thinks that if a woman sees a guy put on a better show, she'll walk out on his show and go see the other show.

Cheryl: You're a very serious person, aren't you?
Jerry: Well, with so many people in the world deprived and unhappy, it doesn't
seem like it would be fair to be cheerful.
Cheryl: I understand.

George: Kramer goes to a Fantasy camp? His whole life is a fantasy camp! People should plunk down $2,000 to live like him for a week. Do nothing, fall ass backwards in the money, mooch food off your neighbors and have sex without dating; now that's a fantasy camp.

George: Toasting makes me uncomfortable, but toast I love. Never start the day without a good piece of toast. In fact, let's toast to toast.

Babu's brother: Where is Babu? What happened to Babu? Show me Babu!

Elaine: The turbo quadramatic transmission offers you the power and prestige to propel you well into the twenty-first century.

George:(to Jerry) Would it kill you not to be so funny all the time? That's all I'm askin'. This woman thinks I'm very funny and now you're gonna be funny, so what am I gonna be? I'm gonna be a short bald guy with glasses who suddenly doesn't seem so funny.

Cheryl: Do you ever laugh?
Jerry: Not really. Sometimes, when I'm in the tub.
Cheryl: That's so sad. What do you do?
Jerry: I'm a comedian.

Kramer: Yeah, well, Joe Pepitone or not, I own the inside of that plate! So I throw one inside, a little chin music... put him right on his pants, because I got to intimidate when I'm on the mound. Well, the next pitch, he's right back in the same place! So... I had to plunk him.

George: I have no funny friends. I'm the funny one. El-Clowno!

Babu: (blaming Jerry for his deportation to Pakistan) I am going to save up every rupee. For someday, I will get back to America, and when I do, I will exact vengeance on this man. I cannot forget it, he haunts me. He is a very bad man, very, very bad man.

Jerry: Well, birthdays are really symbolic of how another year has gone by and how little we've grown. No matter how desperate we are that someday a better self will emerge, with each flicker of the candles on the cake we know it's not to be, that for the rest of our sad, wretched, pathetic life, this is who we are to the bitter end, inevitably, irrevocably... happy birthday? No such thing.

George: Jerry is dark and disturbed? His whole life revolves around Superman and cereal!

George: Nobody is sicker than me.

When Jerry answers his apartment intercom to George, he starts speaking before he has pressed the button.

When Kramer is telling the story about baseball camp, his suitcase in the hallway goes from closed to opened and back to closed.