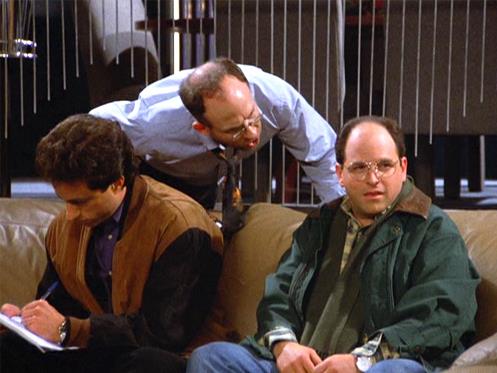 Get a good look, Costanza?

Jerry and George struggle to keep their idea for a TV series alive, one of their problems is they don't know how to do the Elaine character. Jerry meets an old girlfriend he never could kiss, later Kramer gets the opportunity. The ex-girlfriend talks about Elaine's shoes, mainly because she wants them. George is caught staring at the cleavage of the daughter of the NBC executive who is approving their script. Elaine's cleavage provides a means to turn the tables on him.

George: How's this for criticism? Um...you stink. How do you like that criticism?

Jerry: Looking at cleavage is like looking at the sun, you don't stare at it. It's too risky! You get a sense of it and then you look away.

(George is looking at Russell's daughter and her cleavage)
Russell: Get a good look, Costanza?

Jerry: (on men) We're like some kind of weird fish where the eyes operate independently of the head.

Jerry: You know primavera is Italian for spring.
George: No!

Kramer: I understand women. The snub is good. They love the snub.

George: Divorce is very difficult, especially on the kids. Of course, I'm the result of my parents having stayed together, so you never know.

Elaine: Why are my shoes a topic of conversation?

George tells his therapist that he and Jerry pitched "the butler story" to Russel Dalrymple. However, in "The Virgin", they actually pitched it to Rita Kirsen, who was sitting in for Russell while he was in Los Angeles.

The script that Jerry leafs through, after George threw it to him while ranting to Elaine about how his therapist didn't think it was funny, is all blank pages.