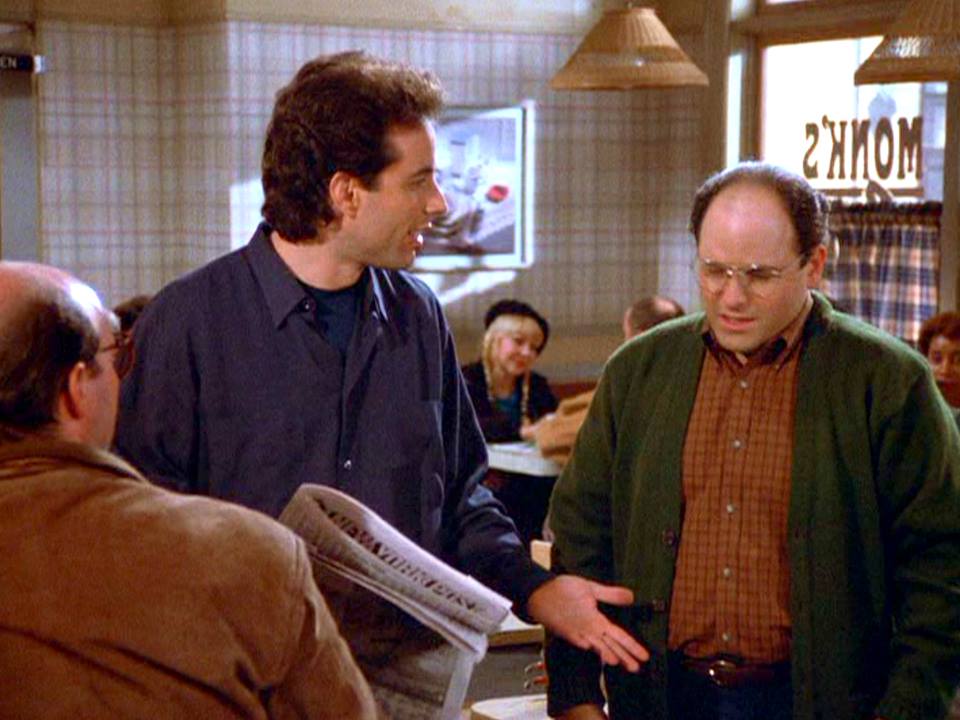 I've been outed! I wasn't even in!

No thanks to Elaine, Jerry must work hard to prove he is straight when a college reporter mistakenly reports that he and George are gay, "not that there is anything wrong with that." Things really get out of hand when the article is picked up by the New York Post. Jerry ends up dating the college reporter to clear his name, but all does not go well.

George: (trying to convince a reporter that he's not gay) Look, you wanna have sex right now? Do want to have sex with me right now? Let's go! C'mon, let's go baby! C'mon!

Jerry: We're not gay. Not that there's anything wrong with that.

Jerry: I've been outed, and I was never in!

(on being homosexual)
Jerry and/or George:Not that there's anything wrong with that!

(When Elaine refuses to remove her coat)
George: Ya know, there are tribes in Indonesia where if you keep your coat on in somebody's house, the families go to war!

(To Jerry in front of reporter from NYU)
George: You see the way he talks to me?

George: (explaining how he and Jerry met) Actually it was in gym class. I was trying to climb the ropes and Jerry was spotting me. I kept slipping and burning my thighs and then finally I slipped and fell on Jerry's head. We've been close ever since.

Kramer: Come on, I thought we were all gonna take a steam.
Jerry & George: No! No Steam!
Kramer: Well I don't wanna sit there naked all by myself!

During the audience taping of this show, Estelle Harris couldn't be there, so Fran Drescher went on to fill in Estelle's role in front of the audience, so that way their laughter could be recorded for the version with Estelle that was later filmed (sans audience).

The hospital scene with George and his mother, when the male nurse comes in to give the male patient a sponge bath, is similar to a scene in the episode "The Contest".

When this episode was first presented to NBC, they thought it was too racy for the public, and that it would be offensive to the gay community. Jerry later proposed the line "not that there's anything wrong with that" line, which turned out to be the thing that saved the episode.

This episode was nominated for the 1993 Emmy Award for Outstanding Individual Achievement In Writing In A Comedy Series.

When Sharon is interviewing Jerry, the zipper on her sweatshirt moves up and down slightly between cuts.

When Sharon first enters Jerry's apartment, George is drinking out of a bottle that switches hands between shots.