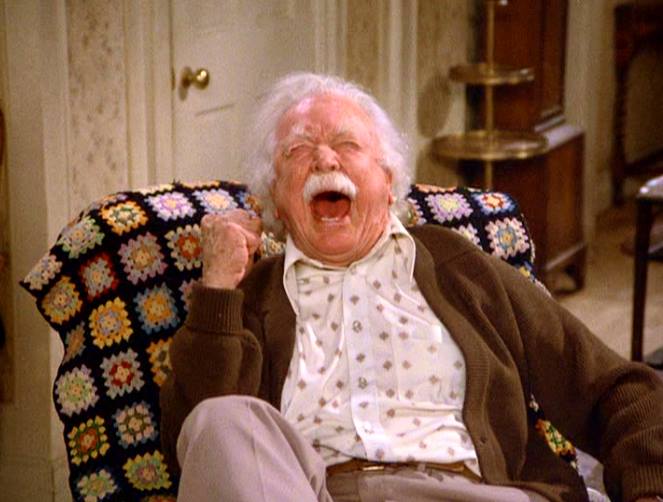 Before you go, would you mind changing my diaper? Ha ha ha!

Jerry, Elaine & George volunteer to help the elderly. Jerry gets assigned to a nasty old man. Elaine is repulsed by the goiter problems of hers and George depresses his charge. Kramer and Newman try the business of selling old records to a used record store. Jerry loses track of his man when they try to take him to the dentist to repair his dentures, after the man had bitten Kramer's arm.

Jerry: The agency sent me.
Mr. Fields: The agency, what agency? The CIA?

George: What are you talking about? How can you sit there and look me in the eye and tell that me you're not worried?! Don't you have any sense?! Don't you have a brain!? Are you so completely senile that you don't know what you're talking about anymore!!?! Wait a second! Where are you going?
Mr. Cantwell: Life's too short to waste on you.

George: (to housekeeper) I would like to dip my bald head in oil and rub it all over your body.

George: What kind of a person are you?
Jerry: I think I'm pretty much like you, only successful.

George: Let me ask you something... What do you do for a living, Newman?
Newman: I'm a United States postal worker.
George: Aren't those the guys that always go crazy and come back with a gun and shoot everybody?
Newman: Sometimes.
Jerry: Why is that?
Newman: Because the mail never stops. It just keeps coming and coming and coming. There's never a letup, It's relentless. Every day it piles up more and more, but the more you get out, the more it keeps coming. And then the bar code reader breaks. And then it's Publisher's Clearinghouse day.
Jerry: All right, all right.

Old Lady: What's bothering you? Is it my goiter?
Elaine: Goiter? What goiter?
Old Lady: This football shaped growth jutting out of my neck!
Elaine: Oh, no...it's distinctive; as a matter of fact I wish I had one!

Elaine: You'd think they'd mention that before they send you over there: "Oh, by the way, this woman almost has a second head." But no, no, I didn't get any goiter information.

It is in this episode that we learn that Newman is a postman.

One of Jerry's unwanted records was "Escape" by Journey. One of the old man's was "Back in Black" by AC/DC.

Bill Erwin was nominated for the 1993 Emmy Award for Outstanding Guest Actor in a Comedy Series for playing "Sid Fields" in this episode.

Newman refers to the record store as "Ron's Records". However, the sign shown on the outside of the store reads "Bleecker Bob's Records."