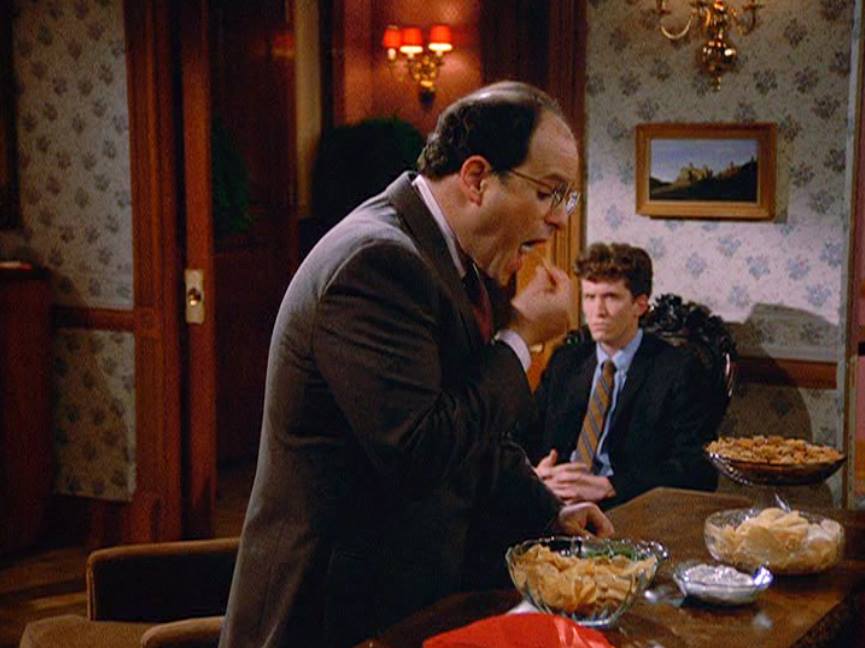 You double dipped the chip!

Jerry dumps his girlfriend after Elaine says her figure is the result of implants. Kramer claims to have seen Salman Rushdie at the health club. By accident Elaine later discovers the breasts are real. George accompanies his current girlfriend to Detroit for her aunt's wake. While there he tries to get a copy of her death certificate so he can get a 50% discount on the airfare.

Elaine: I never knew you were so into breasts. I thought you were a leg man.
Jerry: A leg man? Why would I be a leg man? I don't need legs. I have legs.

(Trying to convince Jerry the man at the health club is Salman Rushdie.)
Kramer: Jerry, are you blind?! He's a writer. He said his name was Sal Bass. Bass, Jerry! Instead of salmon he went with bass. He just substituted one fish for another!

Kramer: (while in the sauna) Whew. It's like a sauna in here.

(George double-dips a chip, and Timmy rushes over to him after seeing what he did)
Timmy: What are you doing?
George: What?
Timmy: Did...did you just double-dip that chip?
George: Excuse me?
Timmy: You double-dipped the chip!
George: Double-dipped? What are you talking about?
Timmy: You dipped the chip, you took a bite, and you dipped again.
George: So?
Timmy: That's like putting your whole mouth right in the dip! From now on, when you take a chip, just take one dip and end it!

Sidra: And by the way. They're real, and they're spectacular!

Elaine: (to Jerry) Just when I think you're the shallowest man I've ever met, you somehow manage to drain a little more out of the pool.

Kramer: Come on, what's wrong with my boys?
Jerry: Your boys should stay in their neighborhood.

Elaine: Come on. Don't you think they seem a bit too perfect?
Jerry: Yes they do!

Jerry: I usually last about ten minutes on the stairmaster. Unless, of course, there's someone stretching in front of me in a leotard, then I can go an hour. That's why they call it the stairmaster. You get up there and you stare.

Megan Mullally, who plays "Betsy", is one of the actors that auditioned for the role of Elaine.

One of the sub-plots of this episode is that George can't make a move with his left hand, and Jerry states that because Jerry himself is left-handed, Jerry can't do the same with his right hand. However, throughout the series, it is frequently shown that George is left-handed also.

Terry Hatcher is one of three of Jerry's girlfriends who would one day star on "Desperate Housewives". (Marcia Cross, Brenda Strong and Teri Hatcher)

Salman Rushdie, who Kramer believes he spotted at the health club , is a real life British Indian writer, whose 1988 fictional book, "Satanic Verses", was critical of Muslims. The leader of Iran, Ayatollah Khomeini, issued a "fatwa", (Islamic religious declaration) calling on Muslims worldwide to assassinate Rushdie, forcing him to go into protective hiding.

In this episode Jerry Seinfeld, famous for his Superman fixation, was able to "date" Teri Hatcher, who actually went on to play Lois Lane in "Lois & Clark: The New Adventures of Superman" (1993).

As Jerry and Sidra are about to get intimate, Kramer knocks on the door and interrupts them. In one shot, they're holding hands. In the next shot, they have their hands in their laps.

At about 17 minutes into the episode, Jerry has his arms folded across his chest. Then the shot changes and Kramer walks in after Jerry says, "I gotta draw the line somewhere." In this shot, Jerry has one hand on his hip and the other at his side.

At the wake, the amount of food on George's plate changes drastically from cut to cut.