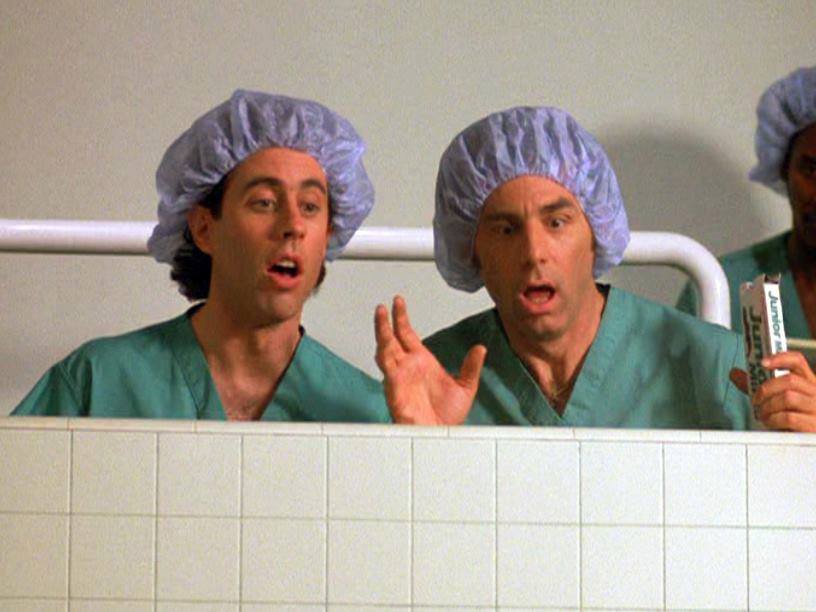 Who is gonna turn down a Junior Mint? It's chocolate, it's peppermint... IT'S DELICIOUS!

Jerry has a date with a woman whose name he has forgotten, but it "rhymes with a female body part." Could it be "Mulva"? Elaine visits an old boyfriend who's in the hospital for an operation; he was once fat, thin she's interested again. Kramer gets an opportunity to witness the operation and he drags Jerry along, while watching they have an accident with a "Junior Mint."

George: (explaining why he wants to watch a video at Jerry's place) Because if I watch it at my apartment I feel like I'm not doing anything. If I watch it here, I'm out of the house; I'm doing something.

Kramer: Who's gonna turn down a Junior Mint? It's chocolate, it's peppermint -it's delicious!
Jerry: That's true.
Kramer: It's very refreshing!

Kramer: They're gonna cut him open. His guts'll be all over the place!

(Jerry is in his apartment, obliviously relating the day's events to George.)
Jerry: Over the balcony, bounced off some respirator thing into the patient!
George: What do you mean "into the patient?"
Jerry: Into the patient, literally!
George: Into the hole?
Jerry: Yes, the hole!
George: Didn't they notice it?
Jerry: No!
George: How could they not notice it?!
Jerry: Because it's a little mint. It's a Junior Mint.
George: W-ca-What did they do?
Jerry: They sealed him up with the mint inside.
George: They left the Junior Mint in him?
Jerry: Yes!
George: I-I guess it can't hurt him. People eat pounds of those things.
Jerry: Yes, they eat them. They don't put them next to vital organs in their abdominal cavity!

Kramer: Come on Jerry hurry I don't want to miss it.
Jerry: Let me finish my coffee. Then we'll go watch 'em slice this fat bastard up.

George: "Interest" - it's an amazing thing, you make money by doing nothing.
Jerry: I have some friends who base their lives on that very principal.
George: Really? Who?
Jerry: No one you know.

Elaine: Did you hear that Jerry? He couldn't eat for weeks!
Jerry: (uncaring) That's terrible...

Doctor: I have no medical evidence to back me up, but something happened during the operation that staved off that infection. Something beyond science. Something perhaps from above...
Kramer: Mint?
Doctor: Those can be very refreshing.

Jerry: Y'know I remember when I was a kid growing up, kids would make fun of my name like you wouldn't believe - 'Jerry Jerry Dingleberry', 'Seinsmelled'...

(George is intently watching "Home Alone")
Elaine: What's with him?
Jerry: You know, a lot of people have asked that.

When Elaine talks about her friend's condition in the hospital, she says "prognosis negative", which was the name of a movie she and Jerry wanted to go see in "The Dog".

The name "Dolores" was not in the script. It was suggested by a woman in the audience.

There is an alternate ending featuring George selling Roy's artwork to Kramer for a small amount of money. Afterward, Kramer states that Roy died, which meant that his artwork was now worth a fortune.

Jerry noted in an interview that the line, "Let me finish my coffee and we'll watch them slice the fat bastard up" was not in the original script. It was improvised on the day of the taping.

This episode is reported to have sparked a lawsuit after a male employee of an unnamed Milwaukee company discussed this episode with a female co-worker. She didn't get the joke, so he provided a photocopy of a dictionary definition of the body part in question so he wouldn't have to say it. Then the lawsuit began.

When Jerry says, "We're like Leopold and Loeb" he is referring to an infamous duo from Chicago who kidnapped and murdered a boy in 1924.

In the opening scene, the milk carton appears on the counter without Jerry removing it from the grocery bag. Also, the milk carton wobbles like it is empty when Jerry brushes it with his hand.